It’s Time to End TB: Changing the Course of the Global TB Epidemic

Despite being preventable and curable, tuberculosis (TB) is the leading killer from an infectious disease worldwide, claiming 4,400 lives every day (1.6 million lives in 2017 alone), and the leading cause of death among people living with HIV (PLHIV).  In 2017, 10 million people became ill with TB disease, including nearly one million PLHIV and one million children. If TB is to be eliminated in the coming decades, efforts to find, cure, and prevent all forms of TB, especially among PLHIV and children—two of the groups most vulnerable to the disease—must be greatly accelerated.

One hundred thirty-six years after the discovery of the mycobacterium that causes TB, the global community has declared its intention to transform its approach to ending TB.  In September 2018, Heads of State and health leaders from across the globe attended the first-ever United Nations High-Level meeting on TB (UNHLM on TB), which brought unprecedented visibility and political attention to the long-standing fight against TB.  At this historic meeting, 120 countries signed a political declaration committing to accelerating the global TB response to eliminate TB by 2030.  The Declaration committed these countries to working together to ensure that 40 million people receive TB diagnosis and treatment, and an additional 30 million people – including PLHIV, children, and household contacts – receive TB preventive treatment (TPT) by 2022. Countries also committed to mobilizing sustainable financing and implementing a multi-sectoral accountability framework. 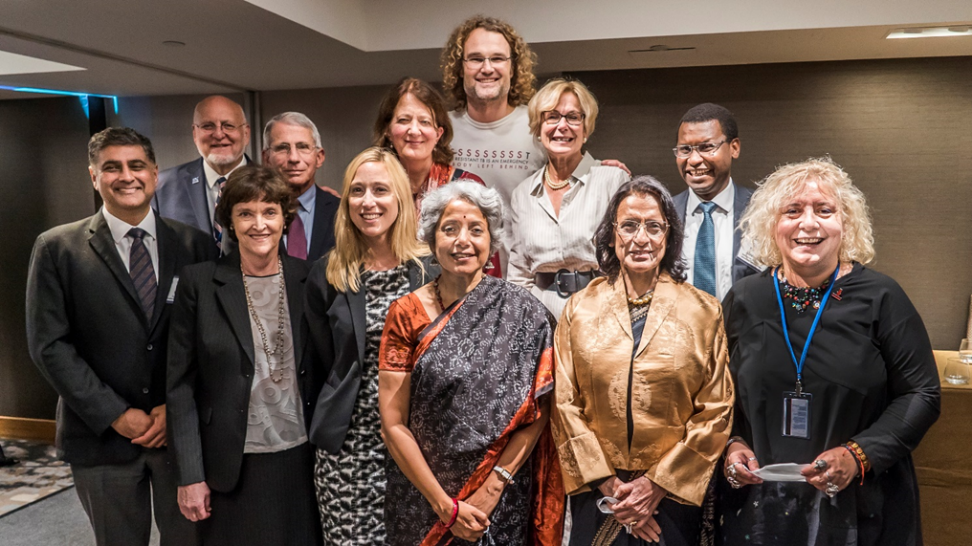 It’s time to fight TB on all fronts

The world has learned in the six decades since we discovered a cure that treating TB disease alone is not enough. While the scientific community continues to develop new and better tools and approaches to find and cure this disease, preventing TB, particularly among the most vulnerable, and interrupting the cycle of transmission are crucial to ending the global epidemic.  Reaching the ambitious global targets will be impossible without addressing all forms of TB on all fronts. By pairing efforts to cure with prevention, both at home and abroad, TB can be eliminated.

Worldwide, one in every four people is believed to be infected with the TB bacterium but not yet sick or showing symptoms. About 10 percent of these people will develop TB disease in their lifetime. The risk of developing and dying from TB disease is much higher, however, among individuals with compromised or immature immune systems – like PLHIV and children.   Provision of TPT has been shown to be effective in preventing TB disease and associated-death.  Despite proven scientific evidence and global recommendations, implementation of TPT remains suboptimal. According to World Health Organization (WHO) less than 20 percent of PLHIV and eligible children under five years old have been provided with TPT.

Commitments made during UN HLM call for substantial scale-up of TPT and set an ambitious target of 30 million people to be started on TPT by 2022 including six million PLHIV, four million children under five years old and 20 million other household contacts of TB patients.

In conjunction with the UNHLM on TB, the Centers for Disease Control and Prevention (CDC) held a side event – Preventing TB to End TB – focused on scaling up TPT globally as a key strategy for achieving TB epidemic control and ultimately ending TB. Co-hosted with the U.S. Agency for International Development and the National Institutes of Health, the event brought together government leaders from India, South Africa, and the United States, representatives from the world’s leading multilateral institutions as well as prominent clinicians and advocates to speak about the importance of prevention in ending TB and reaching the ambitious targets outlined in the UNHLM political declaration.

The U.S. President’s Emergency Plan for AIDS Relief (PEPFAR) has launched an intensive initiative aimed at scaling up TPT in countries with high burden of both TB and HIV. CDC is on the forefront of this PEPFAR initiative, providing technical direction to support accelerated TPT scale-up, which aims to provide all 14.6 million PLHIV receiving antiretroviral treatment (ART) through PEPFAR a course of TPT in the next three years. CDC is directly supporting the scale-up of TPT to prevent TB disease among PLHIV and children pdf iconin more than 15 PEPFAR-supported programs. CDC is also working with local governments and partners to assess the current status of policies and practices around TPT for these priority populations and has developed a roadmap for scale-up of TPT tailored to the country context with a toolkit available for each step in the process of implementation. These country-focused efforts are yielding results. 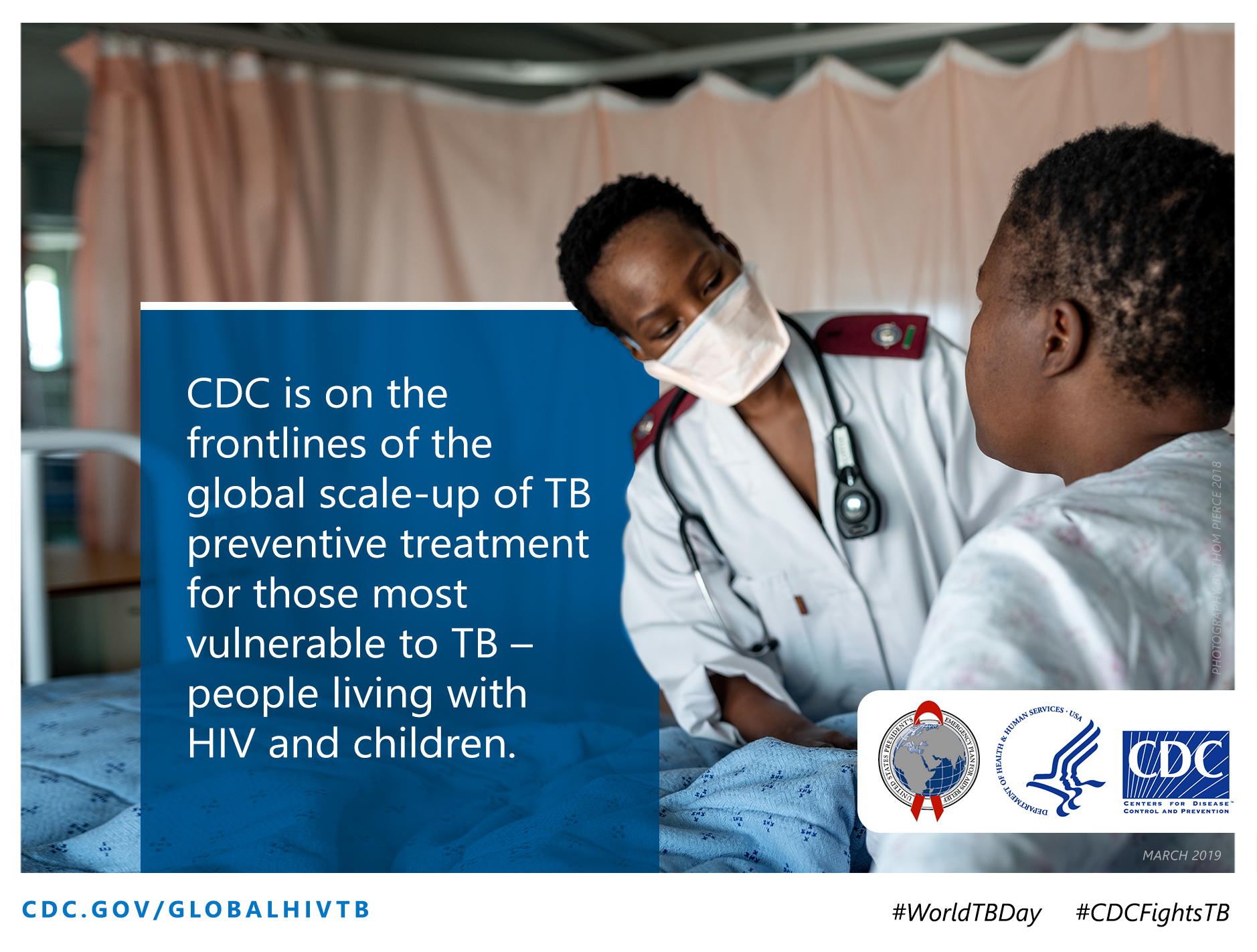 For example, Kenya is one of the countries currently leading by example with dramatic scale-up of TPT in a short time. Uptake of TPT has increased almost 50-fold from 9,981 at the end of 2014, to 600,000 in December 2016, providing 70% of PLHIV with TPT to date. Programmatic scale-up of TPT in Kenya has yielded high (90 percent) completion rates (meaning patients completed the full, recommended course of treatment) and adverse drug reactions being reported in less than one percent of patients.

Similarly, Malawi is encouraging early uptake of TPT and is on track to reach PEPFAR targets. In November 2017, CDC conducted an assessment of TPT scale-up and found greater than 70 percent of eligible PLHIV had initiated TPT at six facilities in Malawi, indicating rapid initial uptake of TPT only three months after implementation began. Further, in the first three quarters of 2018, Malawi’s five prioritized districts had already initiated 251,119 PLHIV on TPT in less than a year, equivalent to 93 percent of their annual target.

And in Nigeria, CDC and partners streamlined the supply chain of isoniazid (one of the drug regimen used for TPT) to match that of ART for PLHIV. Thereafter, the number of PLHIV at CDC-supported treatment sites starting TPT increased by 57 percent from October 2016 to August 2018.

This newly accelerated TPT initiative is just one component of CDC’s global work to align TB and HIV efforts and accelerate progress against both diseases. CDC is working hand-in-hand with government partners, community groups, and health organizations to bolster access to ART, expand HIV testing for TB patients, implement TB infection control in facilities, and intensify routine TB screening among PLHIV. CDC is developing better approaches to screening and diagnosis for children with TB, including piloting household contact tracing in routine programmatic settings to identify children at risk of TB infection and TB disease, and developing a diagnostic algorithm for diagnosing TB and drug-resistant TB in children.

More broadly, CDC plays a key role in the response to the global TB epidemic by bringing its technical know-how and track record in building sustainable TB and HIV programs.  CDC will continue its long history of directing strategic use of data to increase impact and drive quality TB programming for diagnosis, treatment, and prevention for those in need. CDC will also continue to develop and deploy innovative approachespdf icon to TB diagnosis, treatment, and prevention for all forms of TB among adults and children.

On this World TB Day, CDC joins the global community in reaffirming its commitment to find, cure, and prevent all forms of TB. Following a year of visibility, progress, and commitments, this year’s global theme for World TB Day – “It’s Time” – amplifies both the urgency and promise of this moment.

It’s time to fight TB on all fronts.