Community Adherence Clubs: Breaking Down Barriers to Treatment in Namibia

“Are you tired of waiting at the clinic just to collect your antiretroviral therapy (ART)? Would you rather come just once a year? Ask the nurse today about joining a community adherence club (CAC)!” announces Simataa, a registered nurse at a clinic in the Zambezi Region of northeast Namibia during one of the clinic’s health education sessions. Fellow nurse Namasiku explains, “With health education, and with time, everyone starts to hear the good things about community adherence clubs and it is really helping. Some patients are approaching us asking when their club will start.”

When PEPFAR first launched in Namibia, approximately 15,000 people across this southern African nation were getting infected with HIV every year. Fifteen years later, the significant investments made by PEPFAR through agencies such as CDC have helped the country to reduce the incidence of new infections by two-thirds to 4,500 new infections per year. And while Namibia as a whole is approaching HIV epidemic control, the burden of HIV infection is still high in the Zambezi region, with an estimated 700+ new infections per year – roughly two new infections per day.

Namibia is a sparsely populated country, and the vast Zambezi region faces particular challenges such as seasonal flooding and the annual migration of entire communities. These and other issues can exacerbate the obstacles that people living with HIV (PLHIV) face when trying to obtain their ART and maintain their treatment regimen. Long distances to reach clinics, limited time off from work during clinic hours, children to care for at home, lack of transport money, and excessive time spent waiting in clinics are among the common grievances.

Under national guidelines adopted by Namibia in 2016, differentiated models of care are offered to address the challenges and difficulties faced by PLHIV. One such model is the CAC, which has been rolled out on a small scale during its pilot phase. To the passerby, they may appear to be simply a community meeting, but CACs are actually a simplified ART delivery system for six to 12 stable patients receiving their ART. CACs are also a conduit for group-based treatment adherence counselling and support. Though medication is still dispensed from their local health facility, only one member of the club travels to the clinic or health center to collect the drugs for all group members. The remaining CAC members can continue about their day and simply meet as a club, at a convenient time once every three months, to collect their medication from the member who picked it up from the facility. At that gathering, all CAC members also complete a basic wellness screening checklist.

In order to establish these clubs, support from local leadership – both traditional and government – was crucial, as many clubs use existing community meeting spaces to gather and distribute their medication. One innovative club even constructed its own CAC shelter adjacent to the community. 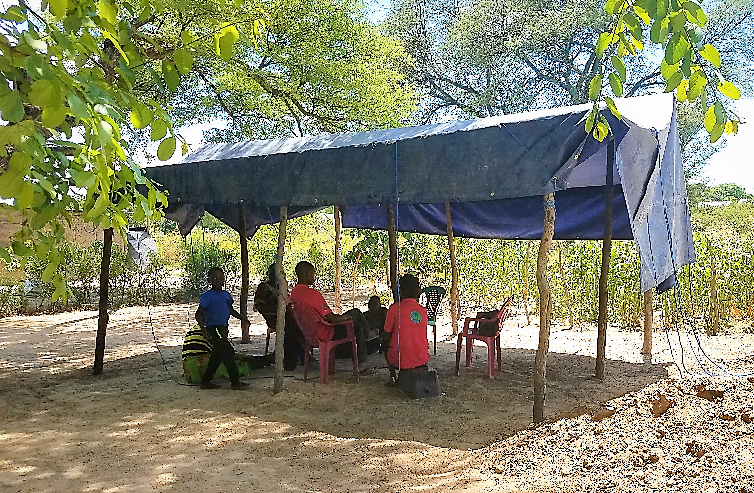 “Patricia” and “Mwaka” (pseudonyms used to protect patient privacy) smile from atop the empty beer crates on which they are seated as Patricia’s grandson plays nearby in the garden. Mwaka is the leader of a Zambezi-based CAC established in October 2017. She and five of her friends and neighbors eagerly enrolled themselves when they heard about it at their local clinic. After just two ART pick-ups and listening to Patricia and Mwaka talk about no longer waiting at the clinic, three more neighbors are already asking to join the club and share in the benefits. “We used to wake up, middle of the night, and come to queue at the clinic to wait the whole day for our pills,” recalls Patricia. “Now CAC saves time!”

Like Mwaka, many of the women in the community have informal vegetable- and fruit-selling stands around town, and if they are not there, nothing can be sold. “Even if I manage to get some money from selling mangos, I can only think of my children and to buy food for them,” explains Mwaka. “I cannot use that money for a taxi to the clinic.” Now, Mwaka does not have to miss a day of selling just to collect her medication. Patricia, who is retired, offered to collect the medication for the club and bring it back to the community for distribution.

A Part of the Community

Because there are nurses involved with the clubs, they know the meeting schedules and can pre-pack all of the pills for the patients in any given CAC ahead of time—meaning club members retrieving the medications do not even need to wait in line. “At Mavuluma clinic, everyone is involved,” explains Namasiku, an enrolled nurse. “People at the clinic are willing to work together. Our TCE Field Officers (volunteers from a local civil society group), nurses, the data clerk…everyone is dedicated.” With this kind of community partnership, clubs manage themselves but have the support that they need both in their organizational phase and when members come for ART collection.

Some CAC members were initially concerned that, by meeting in their communities, their HIV status would become widely known to others. Though CAC members are all HIV+ and sometimes have not disclosed their status widely, clubs have found innovative ways to “disguise” the nature of their club if they want increased privacy or, sometimes, they actually find the motivation as a group to disclose their status openly to the community. “Here, we are comfortable with each other and we want to save our time by joining CAC, so we don’t mind meeting here,” explains Patricia.

The implementation of the CAC program by the Ministry of Health and Social Services is supported by CDC (with PEPFAR funding), and the agency facilitates more than 20 such clubs across the Zambezi Region, with over 170 PLHIV benefiting from this innovative concept. The initial roll-out of the model featured a limited number of health facilities offering CACs with formal evaluation scheduled later. Then improvements will be made to the program based on those findings, and national scale-up will follow.

Stories like this one from Namibia show the human face of PEPFAR’s 15 years of life-saving interventions. For over a decade, thanks to the generosity of the American people, PEPFAR has continuously expanded its cost-effective public health impact and remarkable scientific innovation—and, in so doing, has brought Namibia and the world closer to controlling the HIV epidemic.