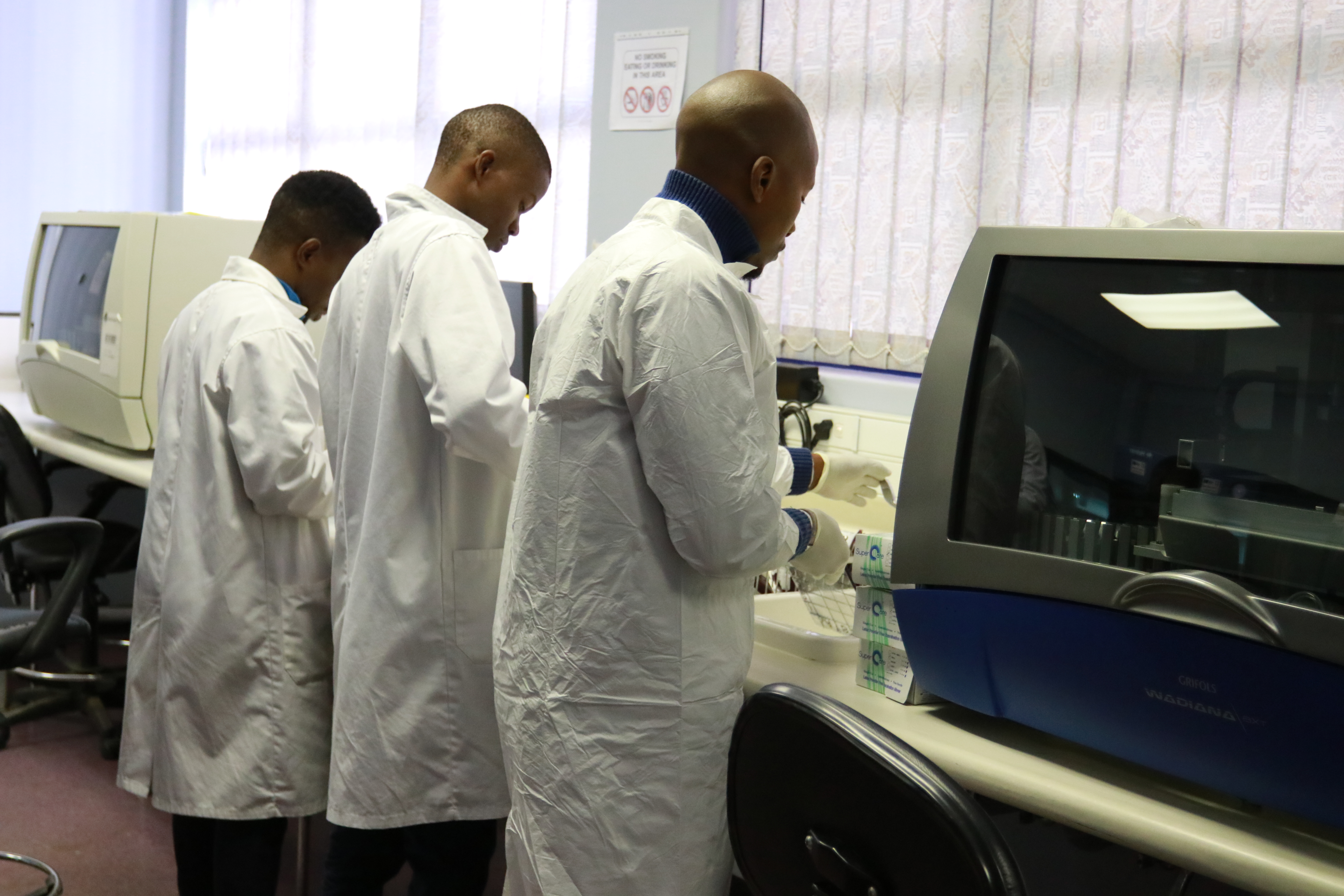 Laboratorians in the Eswatini National Transfusion Service Center collect, process and store blood donations for future transfusions. Photo by: Brittany K. Moore 2018
Over a decade ago, in countries, like Eswatini, that had been hard hit by the HIV epidemic, blood banks were beginning to run dry. Life-saving blood transfusions were unavailable because although the demand for blood products was rapidly increasing, the HIV epidemic made safe blood donations difficult and nearly impossible to obtain.

The country’s hospitals were in critical need of safe blood for medical emergencies like car accidents, maternal emergencies,, and surgeries, but the blood banks were unable to meet the demand.

To address the growing need for blood donations, the Eswatini National Blood Transfusion Services (ENBTS), in 2010, gained much-needed support through a Centers for Disease Control and Prevention (CDC) cooperative agreement from the U.S. President’s Emergency Plan for AIDS Relief (PEPFAR) in partnership with Eswatini’s Ministry of Health.

Stanley Mtemeri, ENTB’s operations manager, remembers the early days prior to the new strategy was launched, “We did not have the right machines or the right platforms. But thanks to CDC and PEPFAR and our Ministry, we were committed to making sure the blood was safe.”

Together, they set out to launch an ambitious effort. First, CDC assisted the Eswatini Blood Bank with a full audit of their activities, taking a deep look at which strategies were working and which needed enhancement. PEPFAR funds allowed ENTB to also partner with an expert team to evaluate the blood needs of the country and form a sustainable strategy to ensure safe and sufficient blood donations for years to come. 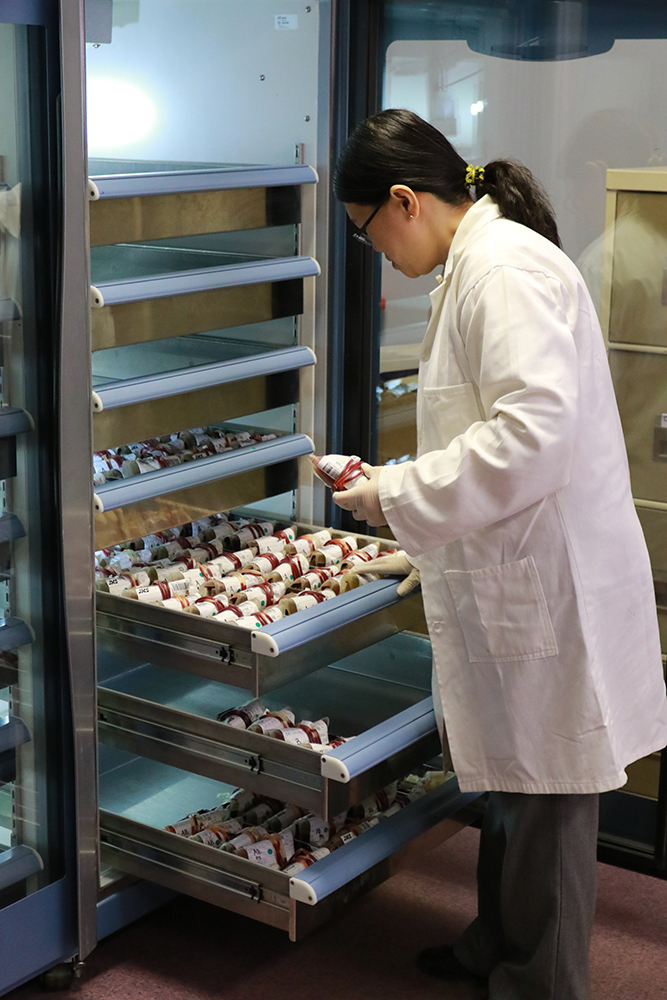 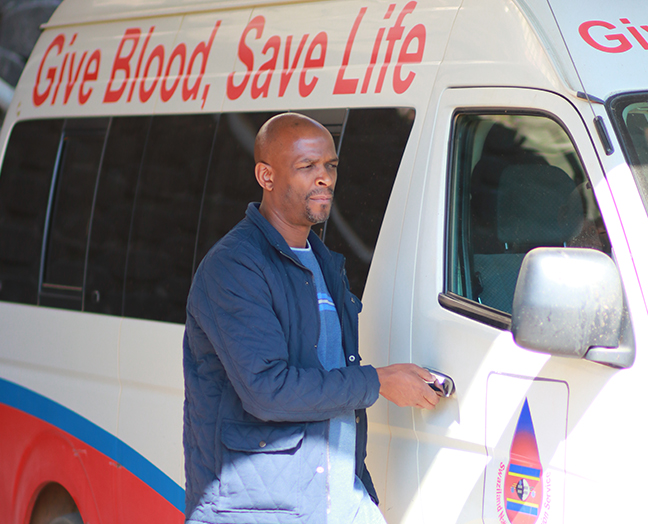 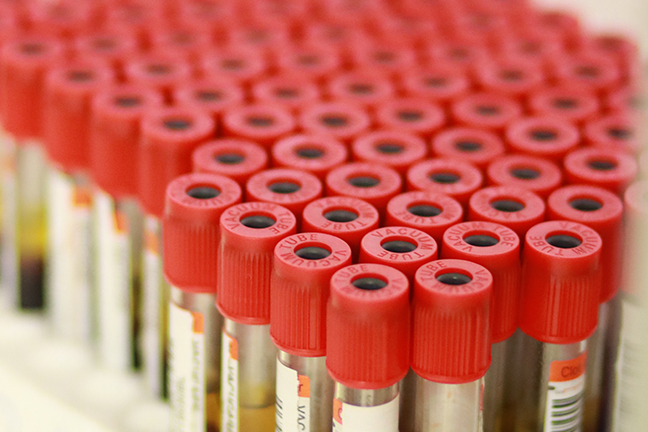 Left: A lab technician stores blood samples at the Eswatini Blood Bank. Top Right: A CDC-Eswatini staffer stands beside one of the mobile vehicles used to host blood donor drives in hard-to-reach, rural areas of the Kingdom. Bottom Right: CDC/PEPFAR’s work with the Eswatini Blood Bank helped to ensure blood donations are safe and HIV-free. Photo by: Brittany K. Moore 2018

With support from CDC, through PEPFAR, Eswatini’s Blood Bank also implemented several initiatives. They engaged students, who have the lowest HIV prevalence in the country, to help them understand the impact and benefits of donating to the Bank and established education teams to help create visibility and awareness of the growing need throughout the country.

The team at ENTBS was also able to bring on board a fleet of mobile vehicles to travel to the Kingdom’s more rural areas to host blood donor drives among those willing to donate blood. They were also able to purchase critically-needed supplies and acquire more accurate diagnostic tools to detect HIV virus in blood samples.

Within three years of the effort’s launch, the Blood Bank’s donations almost tripled – from 5,000 units to 14,000 thousand units of blood annually, while also ensuring these donations were safe and HIV-free.

Giving Back to the Community

During this time, one effort the Bank launched to ensure blood donations were safe and HIV-free was an innovative initiative dubbed the Platelet Effort Donors. Through this program, the ENTB set out to recruit young people from local schools to become donors – as youth are less likely to have acquired HIV. The effort also leveraged the new mobile vans to be able to reach students in communities across the Kingdom.

According to Mtemeri, “these students are life-savers” and, if they choose, they are not only able to donate blood multiple times a year, but also receive critical, potentially life-saving testing for HIV, hepatitis, and syphilis as part of the program.

The initiative currently consists of 110 committed individuals who have chosen to donate blood every four months.

“They are a critical asset to ensuring the safety of Eswatini’s people,” says Mtemeri, “committed to supporting their fellow countrymen and women when the need arises.” 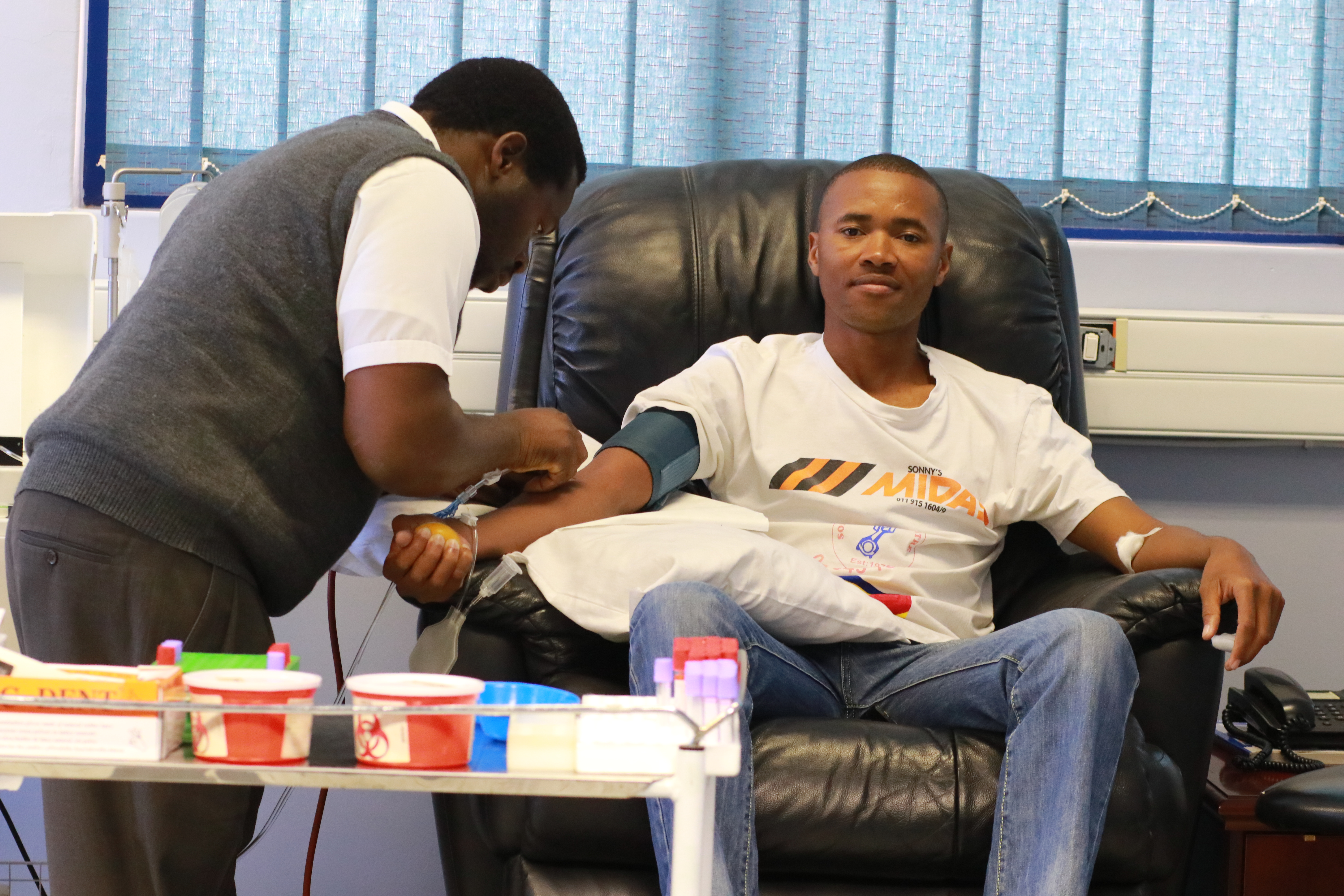 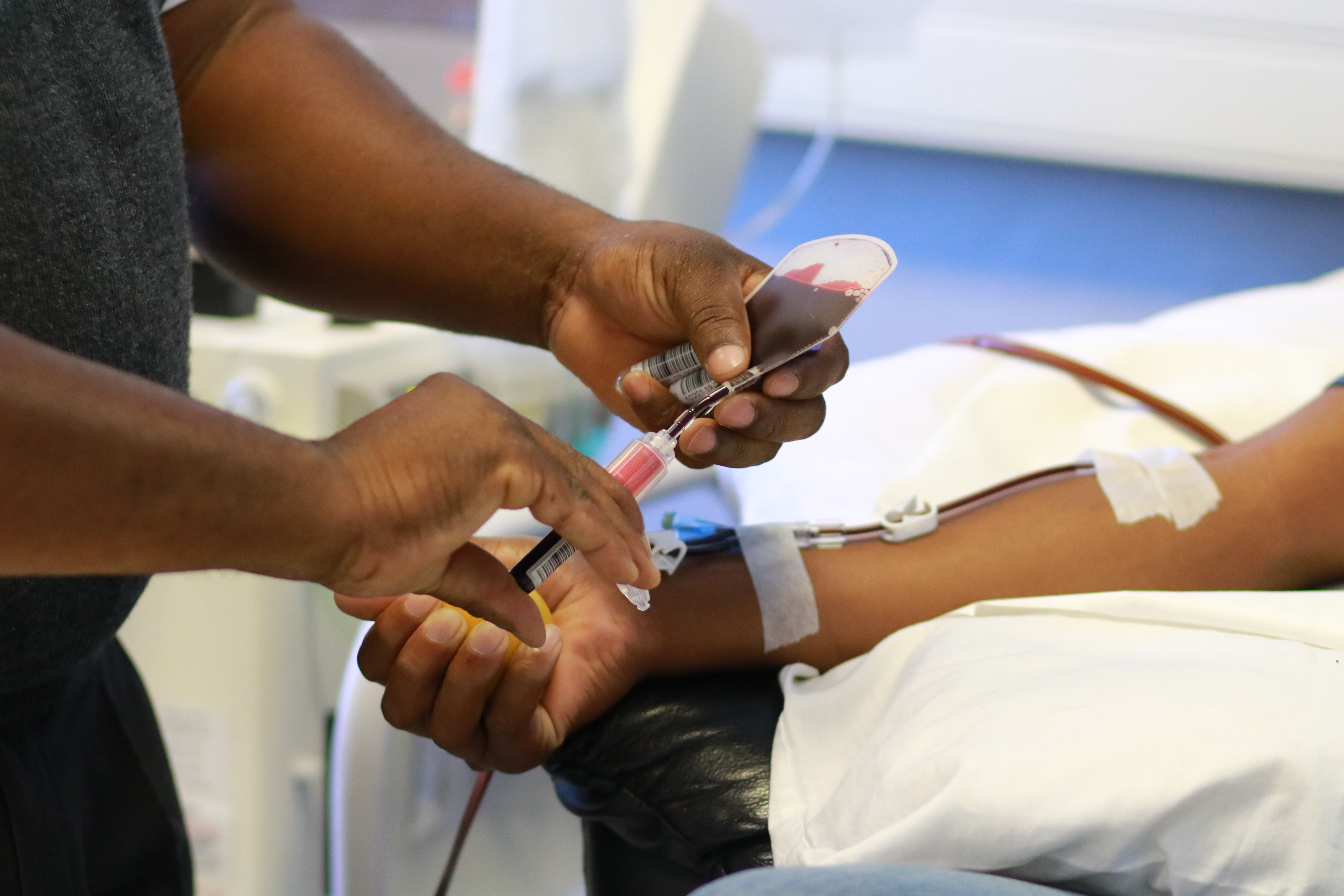 Lungelo is one of these selfless donors who has been donating to the Blood Bank since he was 18 years old. Now, at 23, he is still donating to this day. Every four months, he travels from his home in Manzini to the ENTB facilities in Mbabane and donates blood for two to three hours.

And it is. Donors like Lungelo have become Eswatini’s main source of healthy, safe blood donations. In 2018 alone, students, like Lungelo, have provided over 92 percent of Eswatini’s safe bloodexternal icon.

“I really encourage others out there to do the same,” Lungelo says. “If you know you are healthy and can do this small thing every few months, a small thing that can help so many others, I say you should do it. You should definitely do it.”

By the end of the cooperative agreement, Eswatini had gained the necessary tools and expertise to sustain the Blood Bank’s newly strengthened infrastructure and the effort was ultimately transitioned successfully to the Ministry of Health.

However, the HIV epidemic continues to pose a unique challenge to Eswatini’s Blood Bank. The ongoing demand and need for safe HIV-free blood is still there, but through the Blood Banks improved infrastructure the dream of safety for live-saving blood transfusions has become a reality.

“The occurrence of someone dying because they have no access to blood is now a rarity because of this program,” said CDC-Eswatini Country Director Caroline Ryan, M.D. “It is clear that this effort has helped save countless lives in Eswatini and will continue to do so.” 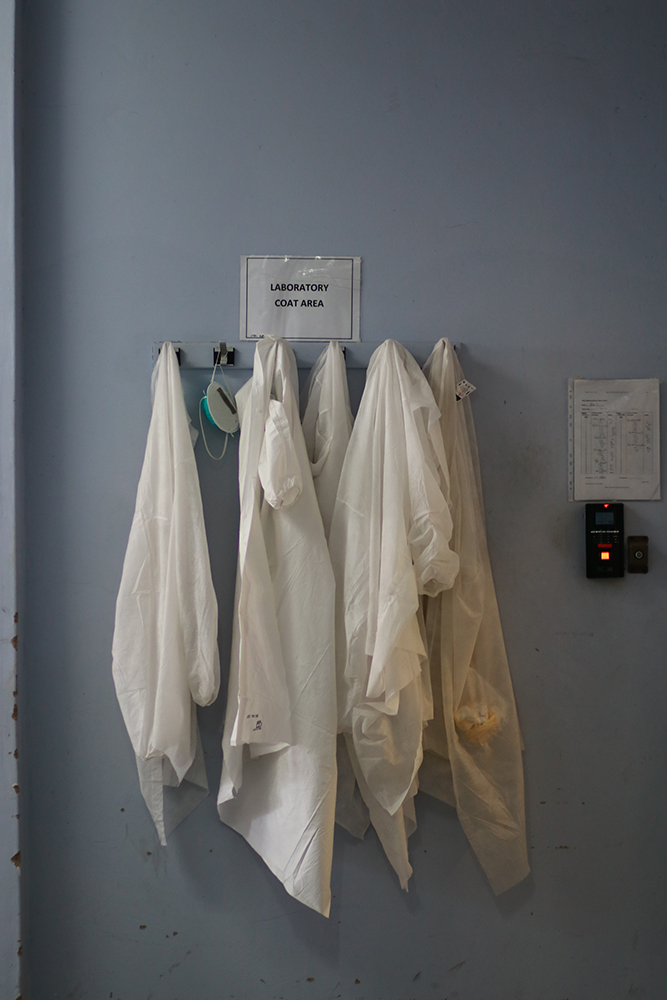 Lab coats hang in the Eswatini blood bank where blood products were once in short supply due to the Kingdom’s HIV epidemic. Thanks to CDC/PEPFAR support, donations to the Bank have almost tripled in three years. Photo by: Brittany K. Moore 2018

Eswatini is one of several countries globally that has achieved HIV epidemic control thanks to the support of CDC and PEPFARexternal icon. Additionally, in 2020, Eswatini became one of only two countriesexternal icon to meet the 95-95-95 UN 2030 AIDS treatment target an entire decade in advance.