The CDC National Tuberculosis Surveillance System has collected information on each newly reported case of TB disease since 1953.  Tracking our progress towards TB elimination would not be possible without the cooperation of the 60 reporting areas across the United States. We hope this report will be a useful tool in informing and improving TB prevention and control activities. To learn more, visit the CDC TB website, or follow us on Facebook and Twitter.

Thank you for your work and commitment to eliminate TB.

TB remains under control in the United States, but current strategies will not be sufficient to reach the goal of TB elimination in this century.

A total of 9,272 TB cases were reported in the United States in 2016 according to data from the CDC National TB Surveillance System. This represents a decrease of 275 from the 9,547 cases reported in 2015. TB cases were reported in all fifty states and the District of Columbia. The 2016 case count represents the lowest number of TB cases on record in the United States. The national incidence rate was 2.9 cases per 100,000 persons (3.6% decrease from 2015).

TB disease remains more common among people who were born in countries with high rates of TB. The majority of these cases are among persons who have been in the United States 5 years or longer. Minority populations continue to disproportionately bear the burden of TB disease

Prompt and effective treatment of TB disease is critical to prevent ongoing transmission of TB. A typical TB case in the United States costs $18,000 to treat and requires at least 180 days of medication, plus x-rays, lab tests, and follow-up and testing of contacts. In 2014, the most recent year for which completion data are available, of TB patients who could be appropriately treated within 1 year of diagnosis, 90.1% completed treatment.

In 2016, there were 96 cases of multidrug-resistant TB and one case of extensively drug-resistant TB reported in the United States. The percentage of TB cases that are drug resistant has remained stable for the last 20 years.

Distinguishing the numbers of cases attributed to recent transmission from those likely due to reactivation of longstanding, untreated latent TB infection is one of many tools state and local TB programs can use to design and prioritize effective public health interventions.  These estimates can be used by state and local TB programs to track progress in the control of recent transmission.
The cycle of TB transmission can be ended by early diagnosis, infection control, and treatment of patients with TB disease; and by identifying and treating contacts with latent TB infection to prevent the progression to TB disease. 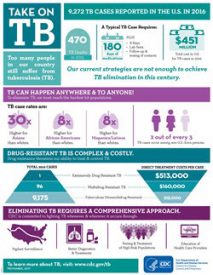