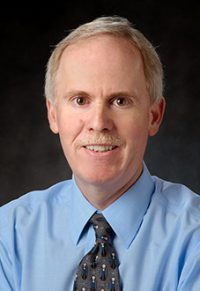 Looking back over 2018, I would like to thank the staff of CDC’s Division of Tuberculosis Elimination (DTBE) and our partners in public health for their collective efforts that led to another successful year in the fight to eliminate TB from the United States. A few highlights of our accomplishments and major activities of the year include the following:

As we enter into next year, I continue to be inspired by your commitment to the very important work that you are doing every day. Thank you for everything you do in the fight to end TB. Happy New Year!

This year the Division of Tuberculosis Elimination (DTBE) would like to take a look back at the research, resources, and events that shaped an extraordinary year. Here is a look back at some TB highlights from 2018. 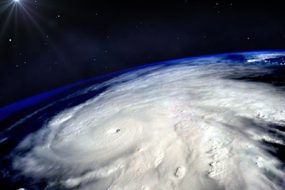 DTBE and state partners supported the emergency response to Hurricane Maria.  On September 20, 2017, Hurricane Maria made landfall in Puerto Rico, as a Category 4 storm. The Puerto Rico Department of Health (PRDOH) facilities, including the PRDOH Institute of Laboratories in San Juan and the island’s health system, suffered significant damage. With assistance from the DTBE Laboratory Branch and Field Services Branch; CDC’s Emergency Operations Center; CDC Foundation; and Association of Public Health Laboratories, a shipping logistics plan was developed. TB specimens were shipped from Puerto Rico to CDC, a triage site for shipment of specimens to Georgia, Florida, and Virginia public health laboratories, to support diagnostic and confirmatory testing between October 2017 and early February 2018.

TBTC was a runner up for the Kochon Prize 2017 for their work on TB drugs. The Kochon Prize has been given annually for the past 11 years to individuals and/or organizations that have made a highly significant contribution to ending TB. 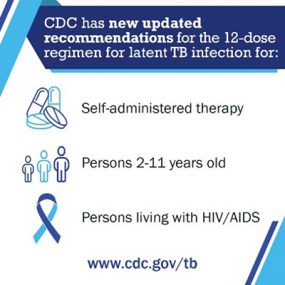 DTBE released updated recommendations for the use of once-weekly isoniazid-rifapentine for 12 weeks (3HP) for the treatment of latent tuberculosis (TB) infection. The updated recommendations, published in CDC’s Morbidity and Mortality Weekly Report (MMWR), support expanded use of an effective, shorter, treatment regimen to reach even more people with latent TB infection.

The updated recommendations include the use of 3HP: 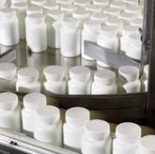 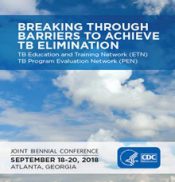 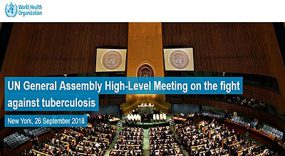 On September 26, 2018, the United Nations General Assembly held the first-ever High Level Meeting (UN HLM)external icon focused on ending TB globally.  CDC leadership and global leaders met to discuss the need for increased efforts to test and treat persons with latent TB infection to prevent TB disease. CDC continues to be at the forefront of researching new diagnostics and treatment for TB, with our global efforts informed and strengthened by our domestic accomplishments. 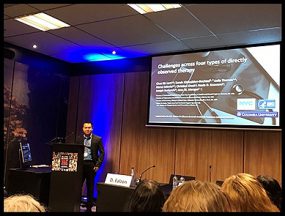 The Division of Tuberculosis Elimination (DTBE) staff, in collaboration with colleagues from the New York City Bureau of Tuberculosis Control, presented preliminary findings from the eDOT study at the 49th Union World Conference on Lung Health – The Hague, The Netherlands. During the conference’s Rapporteur Session, the TB Section highlighted the eDOT study to raise conference attendees’ awareness of these early findings. 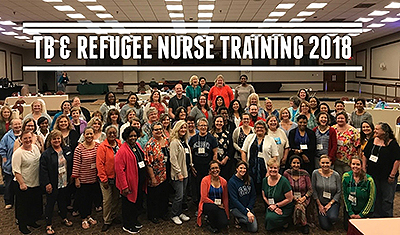 The Virginia Department of Health’s Division of TB and Newcomer Health (DTBNH) hosted their annual TB and Refugee Nurse Training September 25-27 with the theme of TB Prevention: Focusing Below the Surface.  Around 80 participants from the 35 Virginia health districts attended with many others viewing online.  In person, attendees had opportunities to meet, share experiences and network with central office staff, guest speakers and their peers in other parts of the state.

Speakers from the CDC, Virginia State Lab, University of Virginia, local Virginia health departments, Department of Social Services, Global TB Institute, and Resettlement agencies presented on a myriad of topics such as: laboratory technology, case management, community engagement, LTBI treatment updates and educational messaging to improve acceptance and adherence, contact investigations, working with Afghans, and the US refugee admissions process. The evening of the 25th, the group enjoyed a screening of the documentary, Talking Story, which chronicled the lives, rituals and wisdom of traditional healers and spiritual leaders from diverse world cultures. 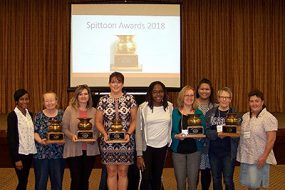 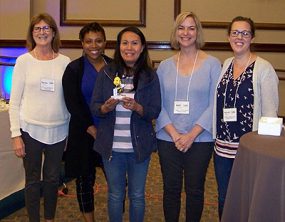 Participants completed evaluations of the training and they have been encouraging. The feedback suggest the DTBNH continue to provide this type of intense annual training, giving feedback such as, “The clinical presentations by faculty were outstanding. I appreciated the expertise of external partners,” “The best ever!” and “Very good – a lot of work went into this and it is appreciated!  Thanks for all that you do for us and for your responsiveness to our questions.” 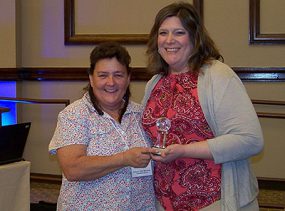 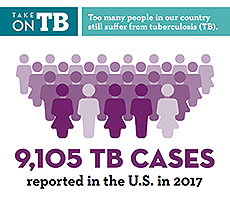 A total of 9,105 TB cases were reported in the United States in 2017 according to data from the CDC National TB Surveillance System. This represents a decrease of 148 from the 9,253 cases reported in 2016. TB cases were reported in all fifty states and the District of Columbia. The 2017 case count represents the lowest number of TB cases on record in the United States. The national incidence rate was 2.8 cases per 100,000 persons (1.6% decrease from 2016).

Prompt and effective treatment of TB disease is critical to prevent ongoing transmission of TB.  A typical case of drug-susceptible TB in the United States costs $19,000 to treat and requires at least 180 days of medication, plus x-rays, lab tests, and follow-up and testing of contacts. 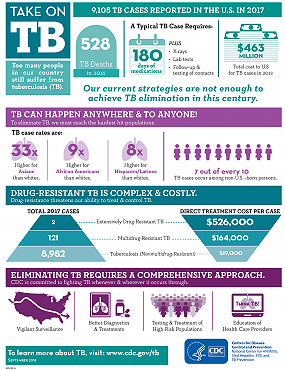 DTBE created Tuberculosis Whole Genome Sequencing Modules to provide state and local TB program staff with information on the current uses and plans for WGS for the investigation of recent TB transmission in the U. S. 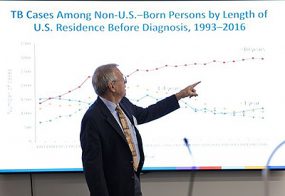 DTBE representatives came together with healthcare professionals and others from across the United States for a Systems Thinking Symposiumexternal icon at the University of North Texas Health Science Center (UNTHSC). The goal of the symposium was to engage participants in multifaceted thinking, to look at new ways of addressing latent TB infection.  The symposium included participants from across Texas and other states bringing perspectives on latent TB testing and treatment, representing academia and research, healthcare, state and federal health agencies, private and public provider organizations, the managed care industry, and others. A discussion on latent TB infection noted the importance of collaborations, “The public health system does not have the capacity to address this alone,” said Dr. Thomas R. Navin, Chief of the DTBE Surveillance, Epidemiology, and Outbreak Investigations Branch, who opened the symposium at UNTHSC.

New Microbiologists in the Laboratory Branch 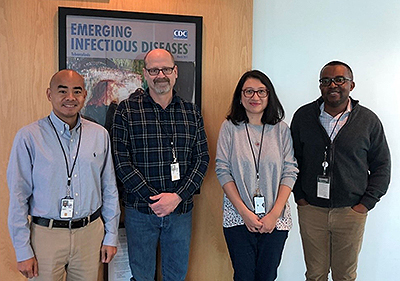 The laboratory branch is excited to announce the addition of four new staff members.

On August 6, 2018, Scott Chancey, Ph.D. joined the Reference Laboratory Team (RLT). Scott will perform molecular testing for the Molecular Detection of Drug Resistance (MDDR) service. Scott has worked as a molecular biologist on the Aseptic Meningoencephalitis Project in the Division of Preparedness & Emerging Infections, Laboratory Preparedness & Response Branch. He also spent 10 years as a Senior Research Associate and Pneumococcal Genetics and Epidemiology Team Lead at Emory University School of Medicine. Scott earned his B.S. and M.S. in Microbiology from Auburn University and his Ph.D. in Plant Biology and Genetics from the University of Arizona.

On September 4, 2018, Robert Domaoal, Ph.D. joined the Laboratory Capacity Team (LCT). As a Laboratory Consultant, Rob will provide oversight and technical consultation to 14 public health TB laboratories funded through the DTBE cooperative agreement. Rob spent two years in CDC’s Center for Global Health in the Division of Global HIV and TB, International Laboratory Branch. He also worked at Emory University in HIV research. Rob earned his B.A. from Boston University and his M.S. and Ph.D. from the University of Rochester.

On September 17, 2018, Wen Li, Ph.D. joined the Applied Research Team (ART). Wen will perform immunology research activities for the development of new methods to screen novel host-directed and pathogen-directed therapeutics against tuberculosis.  Wen spent 4 years specializing in transcriptomics and genomics at CDC and 7 years as a Graduate Research Assistant at Georgia State University’s Biochemistry Laboratory where she worked on bacterial multidrug resistance. Wen earned her B.S. in Biology from China Agricultural University and her Ph.D. in Molecular Genetics and Biochemistry from Georgia State University.

On October 1, 2018, Richard Ebai, joined RLT. Richard will perform growth-based drug susceptibility testing for the Molecular Detection of Drug Resistance (MDDR) service. Richard spent 10 years as a Microbiology Medical Technologist in hospital systems. Richard earned his B.S. in Zoology from Dschang University in Cameroon. He also earned his Certificate in Medical Technology from Shands Jacksonville School of Medical Technology and his M.S in Clinical Laboratory Science from University of Southern Mississippi.

To receive the TB Notes Newsletter, enter your email address at the bottom of the TB Notes webpage. If you would like to submit an article or update in TB Notes, please email Sloane Bowman at wnv2@cdc.gov.