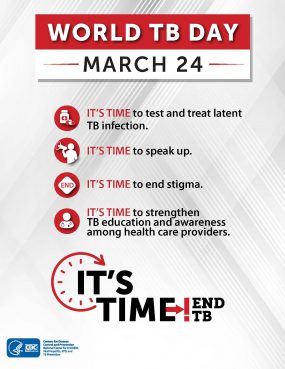 World TB Day is one of the most important events for people working toward tuberculosis (TB) elimination. World TB Day is observed annually on March 24 to commemorate Dr. Robert

Koch’s announcement of his discovery of Mycobacterium tuberculosis, the bacillus that causes TB – the world’s leading infectious disease killer. On March 24, and the days leading up to it, CDC and many others share successes in TB prevention and control, and raise awareness of the challenges that hinder our progress toward the elimination of this devastating disease. The theme for World TB Day 2019 is “It’s Time.” CDC’s World TB Day activities highlight the importance of renewing our commitment to TB elimination. 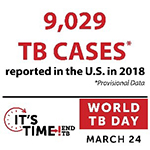 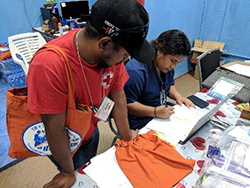 Achieving TB elimination will also require the continued hard work and dedication on the state and local levels, including TB control programs and healthcare providers who are working to end TB in their communities. One of the goals of this year’s CDC World TB Day campaign is to highlight this great work through the 2019 CDC TB Elimination Champions project. In keeping with this year’s theme, “It’s Time!” we are highlighting photos from organizations and individuals that represent their work and commitment to the “It’s Time to End TB!” mission. We encourage you to read their stories and share their photos with your partners and colleagues. 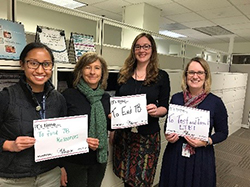 You can also share your own “It’s Time” message by participating in CDC’s World TB Day Social Media Photo Challenge. Other resources include up-to-date information on TB, a digital media toolkit, promotional materials, global TB content, and other tools you can use as part of your World TB Day events and activities.

We hope all of you will have a chance to plan or take part in your own World TB Day activities. Thank you for your work and commitment to eliminate TB in the United States.