During his last year of college, Tenzin began experiencing chest pains, a sore throat, and coughing. At first, he thought it was either a bad cold or pneumonia. It got to the point that it was painful to even walk or laugh. After several months of experiencing these symptoms and misdiagnoses, he learned he had tuberculosis (TB). Shortly after he was diagnosed with TB disease Tenzin learned he had a type of TB that was resistant to the typical drugs used to treat TB, called multi-drug resistant TB.

Tenzin was concerned TB could affect his plans to begin graduate school, and he was worried about potentially having given TB to someone else.

Because he had multi-drug resistant TB, Tenzin had to take special medications to treat his TB. These medicines can cause more side effects. Treatment for multi-drug resistant TB is complicated and takes a long time. Tenzin’s treatment lasted for over 2 years. With the help of his local and state TB programs, Tenzin began the long and challenging treatment process. Judy, a public health nurse, was a source of support during his treatment.

“She was so helpful and I found her to be an incredible resource because of all the knowledge that she had. She was always there to answer any questions that I had about TB as they came up. To have somebody that cared about me and that was interested in not just how I was doing, but who I am as a person. I’m really grateful for the support that I got from that team, and Judy in particular,” says Tenzin.

Now that his TB experiences are behind him, Tenzin shares his story to help raise awareness about TB, and address stigma. He also encourages health care providers to ”Think TB” when they see patients with symptoms like Tenzin’s, so patients can be diagnosed sooner and start treatment right away. Tenzin is also an active member of the TB survivor network We Are TB.

“I would like people to know that TB still exists and is in the U.S. I think, you know, there’s a lot of misdiagnosis or delayed diagnosis when it comes to TB and that sort of happened in my case. And that’s something that could definitely be changed with better education and people just thinking about TB,” says Tenzin. 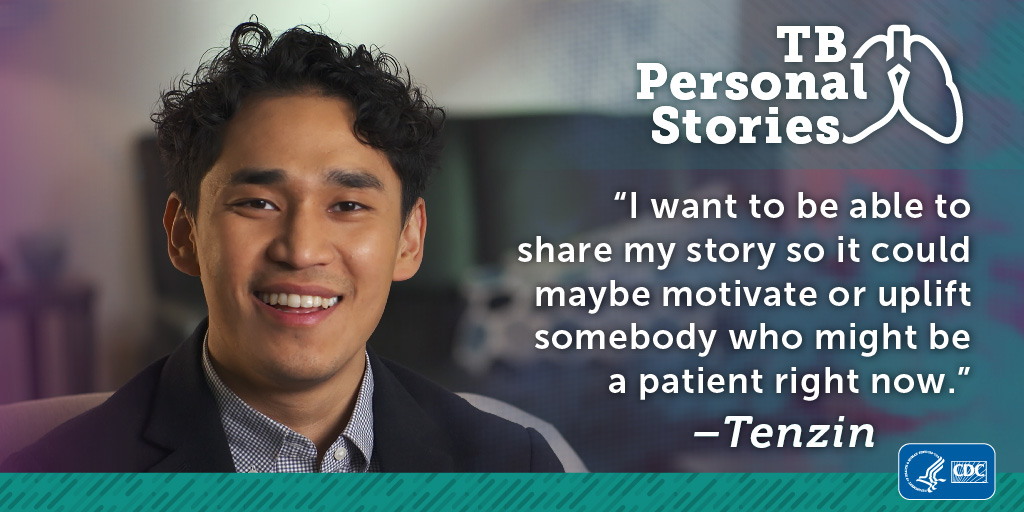 Now that his TB experiences are behind him, Tenzin shares his story to help raise awareness about TB to address stigma. https://tinyurl.com/y5jlrh75

Now that his #TB experiences are behind him, Tenzin shares his story to help raise awareness about TB to address stigma. https://tinyurl.com/y5jlrh75