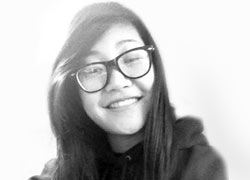 When Sarah, a high school student, found an odd lump on her neck in October 2011, she never imagined it could be tuberculosis (TB). She went to see her pediatrician, who referred her to a surgeon. The surgeon removed the lump, but didn’t diagnosis it at the time as TB.

Then in September 2012, Sarah noticed that something was blocking the vision in her left eye; frighteningly, the sight in that eye was affected and getting worse. She returned to see the pediatrician she had seen before. This time, he referred her to an ophthalmologist, who then referred her to a retinal specialist. The retinal specialist talked with Sarah, learned about her history of having a lump on her neck, found the positive lab results for TB that had never been reviewed or reported by her other doctors or the laboratory, and made the diagnosis of TB of the eye, also known as ocular TB. This is a rare form of TB that is hard to diagnose. A clinician must truly “Think TB” to make the diagnosis. Evidently, the lump that was found in 2011 had been TB of the lymph node. Because the TB disease was not diagnosed, it went untreated; as a result, it spread to her eye, causing her retina to gradually detach. Within three weeks of the diagnosis, Sarah underwent successful surgery to have the retina re-attached.

After the surgery, one of the treating physicians, an infectious disease specialist, immediately referred Sarah to the Gwinnett County health department so she could receive further treatment for her TB disease. She was also placed in contact with a team of doctors who came up with an aggressive treatment plan to treat this rare form of TB.

“I was pessimistic at first. It was my junior year of high school, and I was taking three Advanced Placement courses at the time. I was also involved in numerous extracurricular activities and was preparing for my SAT examination. On top of that, I now had multiple doctor appointments each month that usually took up most of my school day. It was definitely a struggle,” she recalls. “Worse yet, one of the treating physicians even told me that, given the scope of my illness, I might have to place my academic year on the back-burner so I could concentrate on my treatment. That was definitely not something that I wanted to hear. I take pride in my school work and was doing well up to that point. I did not want to lose whatever momentum I had at the time.”

“However, after a few months, my attitude changed. I no longer saw my illness as a hindrance, but as a personal challenge. Everyone faces obstacles; this happens to be mine. I just saw it as something I had to cope with. I knew I could overcome TB,” says Sarah.

In addition to the treatment that Sarah received, her parents, siblings, and other relatives were evaluated for TB, as they are Sarah’s close contacts. No one else in her family was found to have TB disease, but her dad was diagnosed with latent TB infection and placed on treatment.

Sarah’s TB specimen was never tested by the laboratory to find out if the bacteria making her sick were resistant or susceptible to standard TB drugs. As a result, she was placed on more drugs than are normally prescribed to ensure that her TB was treated successfully. Sarah’s treatment, lasting until September 2013, consisted of taking seven and a half pills each day. She takes seven and a half pills each day. During the week, the medicine was administered to her at school. During school breaks, a nurse came to her house to administer the medicine. On weekends, her parents gave her the pills and watched her take them.

“My family has been extremely supportive in this experience by taking me to all my doctor appointments, and making sure that I have enough medicine,” says Sarah. “Luckily, I have been intrinsically motivated to take my TB medicine. I knew that if I took my medicine every day, I would eventually get better.”

With treatment, Sarah says the vision in her left eye has improved. “It is still somewhat diminished, but it is getting better,” she said. “I have a team of amazing doctors; they’re all working hard to make sure I get better.”

For Sarah, the hardest part of this process was staying on top of her school work because of multiple doctor appointments. “My doctor appointments would take so long; sometimes I ended up missing the whole day of school. And because I wasn’t at school, I would have to learn the material on my own and make up all the assignments for that day,” Sarah explains. “My grades started to drop, and it was extremely frustrating on my part. Junior year is considered the hardest year in high school, and I didn’t like the fact that my TB was causing me to struggle more than other students.”

“I want to share my story so other people can relate, and feel like they’re not alone during all of this. I want people to know that with an optimistic attitude and perseverance, anyone can overcome TB.”

Sarah credits the assistance of teachers and classmates with helping her catch up with her studies. “My teachers were very understanding and patient. They gave me extensions on certain assignments, and printed handouts for me when I couldn’t see the board clearly after my retinal surgery. My friends would also let me borrow their notes when I wasn’t in class.” Remarkably, Sarah has maintained excellent grades, and is planning to apply to top colleges to study business.

Sarah wanted to share her story so that other people facing TB, especially young people, will know they are not alone. “While going through the treatment, I realized I don’t know anyone close to my age who was going through the exact same thing. I didn’t really have anyone to relate to with my TB experience,” explains Sarah. “I want to share my story so other people can relate, and feel like they’re not alone during all of this. I want people to know that with an optimistic attitude and perseverance, anyone can overcome TB.”