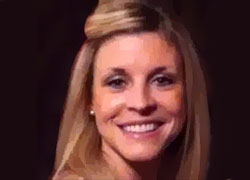 Kenni, a mother of two young daughters, became very sick in 2012 with a respiratory illness. After numerous misdiagnoses, she finally learned she had tuberculosis (TB).

“I wanted to tell my story so others can see that TB still happens in this country, and can happen to anyone,” says Kenni. “The good news is that once you get a correct diagnosis and get on the right treatment, you will start to get better.”

In early 2012, Kenni came down with a cough and fever, and was told by a doctor it was a respiratory infection. “I took the antibiotics I was given, but felt no better; in fact, it was the worst I’ve ever felt. I was coughing so much my ribs hurt.” Another doctor told her she had severe bronchitis.

Kenni kept working as a dental hygienist and helping out at her mom’s café. “Eventually, I couldn’t even turn in a customer’s order, I was so out of breath. My mom insisted I go get a chest x-ray.”

She did, and was told she had pneumonia. She was then sent to a lung specialist who told her it was probably viral. With so many doctor visits and diagnoses, but no medicine that helped, Kenni was exhausted.

That weekend her sister, who is a nurse, came over. “She saw how sick I was and said ‘This sounds like TB. I’m taking you to the emergency room.’”

“At the ER, a physician assistant saw something on my chest x-ray that looked like a big white cloud, and ordered a CAT scan. After the CAT scan, he came in wearing a mask saying he was concerned I could have TB, but he needed to do a bronchoscopy to make a diagnosis.”

The next week, with terrible, severe pain in her lungs and chest, Kenni was admitted to the hospital for the bronchoscopy and blood work. After 3 days, she was told that she likely did have TB and was started on standard TB treatment. “I knew the medicine was working because soon after starting it, my fever broke,” Kenni recalls.

“I want others to know that if they or their loved ones ever come down with this frightening disease, there is help available from nurses and others in the state public health TB program.”

Nine days later, after her TB was confirmed and she was responding to treatment, Kenni returned home. “I was so happy to see my children. They were also tested for TB, as was my husband. Thankfully, none of them were infected,” says Kenni.

The Texas Department of State Health Services (DSHS) TB control program worked with Kenni as she continued her long treatment regimen — taking multiple pills every day for 9 months. “I got a lot of help from Kim, the public health nurse assigned to me. Kim is a terrific person who really helped me get through the long months of treatment. Kim would meet wherever it was convenient for me each day.”

Right before Christmas 2012, Kenni took her last dose of TB medicine. Since then, she has been healthy and TB-free. She is back to her busy schedule of being a wife, a mother, and working two jobs.

Kenni doesn’t know where or how she became infected with TB. Looking back, Kenni regrets that it took so long for a diagnosis. Because TB is no longer common in this country, doctors may not “think TB” when they see patients who have TB symptoms.

One bright spot for Kenni, besides getting better and getting her life back, was the help she received from the Texas TB control program, and specifically the assistance she got from Kim, her TB nurse. Kenni gives Kim much credit for her success in completing treatment. “I want others to know that if they or their loved ones ever come down with this frightening disease, there is help available from nurses and others in the state public health TB program.”