Deo was born in Bhutan, a small country located in the great Himalayas in Asia. Bhutan was settled first by Tibetans, later by Nepalis. The Nepali population grew while maintaining its culture and ethnic identity. In the 1990s, after Bhutanese Nepalis tried unsuccessfully to establish a multiparty democracy, the government of Bhutan forced them to leave. Since then, over 100,000 Bhutanese citizens, including Deo, have lived in refugee camps in Nepal.

“But even then we were not deprived of education. I got my education in the refugee camp,” Deo says. “When I completed my high school, I got a scholarship to complete a Community Medicine Auxiliary (C.M.A) degree.” Deo completed the 15-month course in 2009 and started to work in Nepal for the Association of Medical Doctors of Asia (AMDA) primary health care project for Bhutanese refugees. Deo worked for 3 years as a medical professional in charge of an emergency setting. Though not a doctor, he was carrying out many of the responsibilities of one.

“At the end of treatment I was very happy to get rid of not only the TB germs, but the medicine too. I can say this much, my satisfaction with completing treatment cannot be measured and expressed in words.” 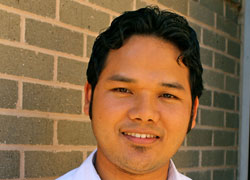 “When I entered the U.S. in April 2012, I needed to go through another health screening at the DeKalb County Board of Health in the Atlanta, Georgia area,” said Deo, referring to the county where he settled. As a part of the health screening, Deo was given a QuantiFERON test to determine if he had TB infection, as well as another chest x-ray. The QuantiFERON test was positive for TB infection, but the chest x-ray did not show any signs of TB disease. Deo was diagnosed with latent TB infection. “The result of the health screening showed that my body had been exposed to TB germs. This probably happened when I was working for the AMDA.” “For the first time I was nervous.” Deo was familiar with TB after working for many years in the medical setting in Nepal and knew that it could be a deadly disease. Fortunately, Deo’s latent TB infection was detected before he developed TB disease. In the process of his treatment for latent TB infection, he came to meet Dr. Oladele, clinic director for the county. Through the doctor’s care, Deo received rifampicin for 4 months to treat the TB infection and prevent him from progressing to TB disease.

“I completed my treatment in October 2012. Though I had some knowledge about TB drugs and their side effects, I found it difficult to get through it in actual practice. But it was not impossible, and I don’t think it is impossible for others. At the end of treatment I was very happy to get rid of not only the TB germs, but the medicine too. I can say this much, my satisfaction [with completing treatment] cannot be measured and expressed in words.”

Deo is now working in Atlanta as a research interviewer. He and his research team members are working to recruit other people coming to the United States into a study about TB diagnostic tests.

Deo has a message for others. He urges everyone who might have been exposed to TB bacteria, “Go see your doctor” to be tested for TB infection and screened for TB disease, especially if you are having TB symptoms such as cough, fever, or weight loss. While the idea of having latent TB infection or TB disease might be frightening, TB can be treated. He invites others to join him in his dream of a TB-free world. “It is up to you and me!” Deo says.