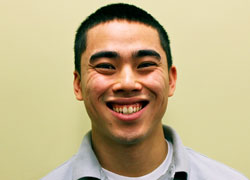 Tri found out he had tuberculosis (TB) shortly after beginning college. After 9 months of treatment for TB disease, Tri is back to doing what he loves-playing basketball. He also started working as a peer counselor to educate others about TB.

Tri had been looking forward to going to college, and in the fall of 2011, he was finally there. Tri also stayed busy with his job. He was sure this would be an exciting year.

After only 2 weeks of classes, he started coughing, and thought he had the flu. He went to a doctor for treatment, and was given antibiotics. But despite taking the medicine, he was still having fevers in the afternoon and other symptoms: a persistent cough, night sweats, and loss of appetite.

Tri didn’t know that he had tuberculosis (TB) until his younger brother who was also sick was found to have TB. “After my brother was diagnosed with TB, the health department did a contact investigation of the whole family,” explains Tri. “That’s when I found out that I also had TB disease.” Tri went to the preventive health clinic in Grayson, Georgia, to get an x-ray. His results showed he had TB disease, too. “That’s when I found out that I would have to be on isolation and TB treatment.”

“TB is a big word and a big disease, but it’s curable and you can get through it. There is help out there.”

Once diagnosed, Tri and his brother began treatment for TB. Because Tri was so sick and needed to stay at home until he was no longer infectious, he ended up having to quit school and his job. He and his brother remained on home isolation for 4 months because of the severity of their illness. During this time, Tri and his brother motivated each other to stick with the treatment. “We kept each other company. Taking my medicine was also important because I didn’t want to get my sisters and mother sick with TB.”

Being isolated in their house for so long was hard for the two young men, who loved to go out with friends and play basketball. They had to wear masks around others.

Tri credits his case manager Hoa, who works at the Gwinnett, Newton, and Rockdale County Health Department Preventive Health Clinic, with motivating him during the lengthy 9 months he was on treatment. “She came to our house every day to deliver directly observed therapy, answer our questions, and encourage us,” he recalls.

Hoa also worked to help Tri and his family obtain grants from the American Lung Association. “The grants helped us with our groceries, bills, and other household expenses,” he explains.

Once cured of TB, Tri was able to resume normal activities, including doing what he loves, which is playing basketball. He hopes to return to school in the near future, possibly pursuing a career in the field of health care. Tri also began working at the Gwinnett, Newton, and Rockdale County Health Department Preventive Health Clinic as a TB peer counselor. “As a peer counselor I get to help and educate people who don’t know anything about TB. I share with them my experience and let them know that they can get through it, and there is help out there for them.”

Tri offers advice for others who may receive a TB diagnosis. “Don’t panic. Follow your doctor’s advice about treatment and take your medicine every day. TB is a big word and a big disease, but it’s curable and you can get through it. There is help out there.”