Santos first heard about tuberculosis (TB) when his infant son became ill and was diagnosed with TB meningitis. Santos then learned that he himself had latent TB infection. He started treatment for latent TB infection, but didn’t finish it. Years later, he came down with TB disease. Now Santos serves as peer counselor at his county health department for other people who have latent TB infection.

Santos, a devoted father, was deeply worried when his infant son was diagnosed with TB meningitis. This is meningitis of the brain or spine covering, a severe, life-threatening form of TB disease. 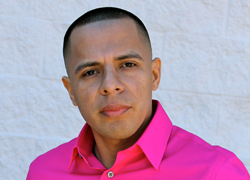 He made sure his son received the care and treatment he needed. According to standard protocol, when Santos’s then-infant son was diagnosed with TB, the local public health department where he lived conducted an investigation to find out if others in close contact with the young patient had TB disease and could be source of his infection. The investigation also looked to see if others in the household could have been infected, as well, so they could be given preventive therapy. Santos did not have TB disease, but he learned that he did indeed have latent TB infection. This means he had probably been infected by breathing in some of the same bacteria that was making his son sick. But the organisms had been stopped by Santos’s immune system and were in a latent, nonactive state. Thus, Santos was not contagious and did not have any symptoms of TB disease.

Santos started taking medicine to get rid of the TB bacteria and prevent the infection from progressing to TB disease, but he did not complete his treatment. Since Santos wasn’t feeling sick, he did not understand the importance of completing the full course of preventive treatment. However, his son finished his TB treatment and was cured. All was fine, for a few years.

“The local TB program helped me out a lot. First, they helped me understand about TB. They gave me a lot of information that I needed. Whenever I needed something, they helped.”

Then Santos started feeling really bad without knowing what was wrong. By this time, he and his son had moved to the Atlanta, Georgia, area, where several of their family members live. He went to the doctor and was treated for various respiratory ailments, but he didn’t improve. He lost his appetite and, as a result, lost a lot of weight. He was coughing and sweating, was very weak, and constantly had a fever. Eventually he was even coughing up blood, which was very frightening. He became so sick that he could no longer work. And without a job, he then lost his home. He and his son moved in with his brother, who was glad to welcome them.

Santos did not get better, and had no idea what was making him so sick. His mother insisted he go to the hospital. He resisted initially, but eventually felt so sick that he agreed to be driven to the emergency room of the local hospital. There he was diagnosed with TB disease. He was given standard treatment for TB disease, which means taking a handful of pills every day for at least 6 months. Taking the therapy was hard since some of the drugs can have unpleasant side effects. However, as Santos can attest, it’s not impossible. “I was motivated by my family. Also, I wanted to be healthy and I wanted to work. Because I was sick, I couldn’t work, and I lost everything,” Santos relates.

Luckily, Santos persevered and completed his TB treatment with the support and encouragement of the Gwinnett, Newton, and Rockdale County Health Department Preventive Health Clinic staff. “The local TB program helped me out a lot. First, they helped me understand about TB. They gave me a lot of information that I needed. Also, they helped me out if I didn’t have a ride to the clinic, because I didn’t have a car; they gave me a ride. Whenever I needed something, they helped. Especially my case manager, April — she helped me out with everything.” He is completely cured and is now working for the county preventive health clinic as a TB peer counselor. “When I came to the clinic every day to take my treatment, the peer counselors helped me a lot. They helped me so much, I wanted to do that too – to help other people start and finish their TB treatment.” He provides education and support to others recently diagnosed with latent TB infection.

Santos knows from personal experience that latent TB infection can develop into a disease that is debilitating and frightening. Santos wants to tell others, “If someone finds out they have TB, I’d want to let them know, ‘You don’t need to be scared. You just need to take care of yourself and take your treatment.’ Do whatever your doctor tells you and whatever the health clinic tells you. The most important thing is, finish your treatment.” The good news is, TB is usually treatable. If you take the full course of drugs for either latent TB infection or for TB disease, you can be cured and get better. Santos feels that if his experience and counsel keep others from getting sick and going through what he experienced, his efforts will have been worthwhile.