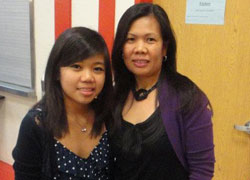 Rosalie’s daughter Faith was first diagnosed with TB at the age of 5, although Rosalie didn’t understand the diagnosis. Later, after years of poor health, Faith was diagnosed again with TB when she was 12. After being hospitalized several times and taking TB medication for 9 months, Faith is now cured of TB disease.

In 2003, Rosalie’s now-teenaged daughter, Faith, was diagnosed with TB disease at the age of 5 when they were living in the Philippines. At that young age, Faith was coughing, lost her appetite, and lost weight. Rosalie took her to a doctor in the Philippines, who said that Faith had “primary complex,” without explaining what that meant; years later, she learned it means TB in children. The doctor wrote a prescription for TB drugs – medications in a liquid suspension that is easy for children to swallow – with directions to give Faith the medicine for 6 months and come back. Rosalie did just that. After 6 months, Faith’s symptoms went away. She was brought back to the doctor and given a chest x-ray. The doctor told Rosalie that Faith was “cleared.”

In 2005, the family moved to Texas to start a new life. Unfortunately, Faith was frequently ill. She lost a lot of weight and often had a fever. She was not able to play with other children or take part in physical education activities at school. Faith’s favorite activity was swimming, but she couldn’t do that either, because after she swam, she always had a fever. Rosalie wondered why Faith was always sick. But since she didn’t understand that Faith’s earlier diagnosis was TB disease, she didn’t consult a doctor.

In 2010, at the age of 12, Faith developed an extremely sore throat and a fever. At that point, thinking it was strep throat, Rosalie took Faith to a doctor. Faith was given Sudafed and medicine for her sore throat.

A few days later, Rosalie saw that a lymph node on Faith’s neck was very enlarged—the size of a golf ball. Then several days after that, the lymph node on the other side swelled up as well. Rosalie took Faith back to the doctor, who thought it was lymphoma. As part of the work-up, the doctor gave Faith a chest x-ray; it was clear. The doctor then placed a tuberculin skin test, and the result was positive, indicating infection with M. tuberculosis bacteria. The doctor arranged for the family to see the TB staff at a Texas children’s hospital. After a lymph node biopsy and culture, Faith was finally diagnosed with TB disease in her lymph nodes.

“The doctors were wonderful in explaining everything, and one even gave me her personal phone number and encouraged me to call whenever I had a question,” says Rosalie.

Faith was started on treatment for TB disease. For the first 2 months of treatment, she had to take a large number of pills—14 a day. She was assisted by a public health nurse who came to their house to provide directly observed therapy. She then had to take 9 pills a day for several months after that, helped by an outreach worker from the county health department. It was a hard time for Faith and her family.

“We experienced stigma. Faith felt she had to stop going to friends’ houses,” explains Rosalie. The family also felt they couldn’t talk about Faith’s TB status with neighbors and friends because of their reactions.

During a routine check-up with the hospital TB staff, another problem was found: Faith had high blood pressure. She underwent a CAT scan and an ultrasound; these procedures revealed that a lymph node on Faith’s kidney was enlarged and was pressing on an artery, causing the high blood pressure. It was so dangerous that Faith was hospitalized for 3 days. She was put on blood pressure medication, and had to keep taking it for 3 years.

As recently as last year, when Faith underwent an ultrasound, her lymph node was still enlarged. But today it is getting better. And best of all, her TB is cured.

Rosalie is grateful for the excellent care and support Faith received from her doctors.“The doctors were wonderful in explaining everything, and one even gave me her personal phone number and encouraged me to call whenever I had a question,” says Rosalie.

Although the family kept Faith’s illness a secret while she was undergoing treatment, they have since come forward to share their story to raise awareness of the disease, particularly among children. Rosalie wants everyone to know that TB can happen to anyone. She hopes people everywhere will educate themselves about TB and be more supportive of TB patients. She wants to educate others to not be afraid of TB. Rosalie wants to provide a voice to those affected by TB. “If I don’t share this story, who will?”