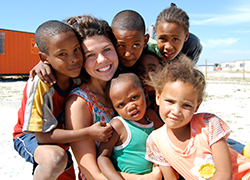 Natalie contracted multidrug-resistant tuberculosis (MDR TB) while volunteering as a physical therapist in South Africa. She was misdiagnosed for a year, then treated for 2 years before finally being cured of the disease.

I’m Natalie. I’m 35 years old, I live in Tennessee, and my husband and I just celebrated 1 year of marriage. I am also a tuberculosis (TB) survivor.

In 2005 and again in 2007, I traveled to South Africa for approximately 5 months each time. I worked as a volunteer physical therapist, treating patients affected by TB and HIV at a 22-bed facility approximately 40 minutes outside of Cape Town. As a health care provider, I knew that TB is spread through the air, but I honestly didn’t believe I was at risk.

In early 2008, about 3 months after returning home from my second trip to South Africa, I developed severe gastrointestinal symptoms that wouldn’t go away. Eventually, I was diagnosed with ulcerative colitis and was treated for a year with five different drugs, including Remicade, a very strong anti-inflammatory drug, without any success. The symptoms became so terrible that my doctor finally told me that my last resort was to have my colon removed, since nothing else was working. I didn’t feel at peace about this, and asked for another month before making a decision.

Then another symptom emerged: chest heaviness with fever. I visited my primary care physician, who ordered a chest x-ray. The chest x-ray showed a small abnormal area in my right lung. He diagnosed me with pneumonia. I was actually relieved to hear this, because it meant the plan to remove my colon would be put on hold. For 2 weeks I was treated with antibiotics for pneumonia, and I actually began to feel better. The chest heaviness and fever went away, and so did my gastrointestinal symptoms!

I thought that both the pneumonia and abdominal problems were cured. But a month later, a follow-up chest x-ray revealed the small area in my right lung was even more defined, now more like a lung mass. The “pneumonia” no longer resembled pneumonia, and I was sent to Vanderbilt University Medical Center in Nashville for extensive testing.

I was diagnosed with pulmonary TB, and eventually multidrug-resistant TB (MDR TB), in the summer of 2009.

Vanderbilt University Medical Center and the Metro Public Health Department treated my MDR TB for almost 2 years in Nashville. My strain of TB germ was resistant to seven different drugs! The treatment was long, and I endured difficult side effects from the medicines. But I recognized how blessed I was to be receiving treatment in a country where the anti-TB drugs and expert medical care I needed were available. And despite being unable to work, I was able to focus on getting well because financial assistance was made available to me.

“As a physical therapist, I was trained to help others. But having TB taught me how to accept help from others—and in the process, I found my own voice, and can now share this story.”

On January 21, 2013, I celebrated 2 years of being off TB medications and living TB free! I am now a grateful survivor, and have learned so much along this journey.

TB is not only difficult on the patient, but also on the family and community surrounding the patient. Sometimes I felt having TB was harder on my parents than it was on me. They had full-time jobs and were driving 110 miles one way—weekly, and sometimes even multiple times in a week—to come to my appointments with me. It was physically, emotionally, and financially draining.

I knew it was hard on my parents to watch me become frail and completely unreliable as I lost my short-term memory. They helped me with chores, paying bills, and even simple decision making.

I became depressed and felt really awkward socially. I knew what the word stigma meant, but it was during this time that I learned how stigma feels.

In South Africa, I remember how difficult it was for my patients to talk about TB. It carried a “dirty” stigma. It was shameful. At times during my own experience here in the United States, I also felt the weight of that stigma. I felt dirty, stared at, and defined by the mask that I wore. I have never been so grateful to hear six words: “You can take your mask off.” This was music to my ears!

As a physical therapist, I was trained to help others. But having TB taught me how to accept help from others—and in the process, I found my own voice, and can now share this story.

At first, I thought no one would care. After all, everyone has struggles. I wondered why anyone would consider MY words important.

But to my surprise, people did care. I learned that speaking up can and does make a difference. Every single time that I talk about TB, I think of the courage of my patients from South Africa. They had so much to lose: their family, their friends, their jobs, their houses. Today I speak on their behalf. I’m so grateful to be alive, and I want to give a voice to people suffering from this disease—for something beautiful to appear at the end of a really tough, long road.