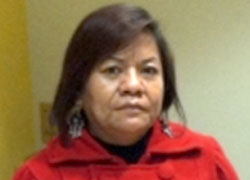 Martha is a nurse who worked in Juarez, Mexico, at a local community hospital, caring for patients at one of the poorest health centers. In October 2010, she was diagnosed with tuberculosis (TB) and later she learned she had multidrug-resistant TB (MDR TB). Martha wants to tell others how important it is to receive effective care, as she did from the Texas binational TB program Project Juntos.

My name is Martha, and I am a licensed nurse. I am also a diabetic. Being the head of my household, a single mother with two teenagers, and the sole support of my elderly mother, my priorities were my family and work. I now see it as ironic that despite being a health care provider, I did not take care of myself as I should have.

In August 2010, I developed a cough, but did not pay much attention to it. After 2 weeks, I went to see my physician, and he treated me for a cold. I developed a more persistent cough and started losing weight. A month passed, and I started having persistent night sweats; the cough was getting worse. Within 3 weeks, I had gone through two rounds of antibiotics.

In late September 2010, I visited my physician again, and he ordered a chest X-ray. It showed cavities in my lungs, a sign of TB disease, but he did not notice it and treated my illness as bronchitis. He prescribed one antibiotic after another, all of which failed to help. I had a lot of symptoms — sweating, chills, raised temperature, loss of appetite, and fatigue. All I wanted to do was stay in bed. Finally, in late October 2010, I was tested for TB and told that I had TB disease. This was shocking news to me.

I was referred to the local TB program in Juarez and received a lot of support from the staff. I started treatment for TB right away, and took it for the next 2 months. But instead of getting better, I was still getting worse. I continued to lose weight every day — there were days when I couldn’t eat.

In January 2011, my physician told me my treatment was not working. I was referred to Project Juntos in El Paso, Texas for my TB care because my case was so challenging. Project Juntos, supported by the Texas Department of State Health Services (DSHS), provides TB treatment services to binational patients in the border area, as well as to special cases—those that are especially hard to treat. My treatment was given as directly observed therapy (DOT) for the entire length of treatment, which meant a Project Juntos nurse made sure I took every dose of the drugs I needed. I also learned my treatment would include injections three times a week for 5 months—and I have always had a fear of injections. There were times that I was ready to give up, but the Texas DSHS Project Juntos nurses always encouraged me to make sure that I continued with my treatment.

Luckily, it appears that I did not infect anyone. My two teenage children and my mother were tested for TB infection and evaluated for disease, and fortunately all were negative; the Project Juntos nurses keep monitoring them with evaluations in 6-month intervals. The health center where I worked in Juarez carried out contact investigations among my co-workers. I know of no case being linked to me.

By the end of June 2011, it became clear that this new treatment was not working. New samples of sputum were collected and tested, and while we waited for the results, I was taken off treatment. By late August the results came back and showed that my TB was resistant to all six drugs I was taking.

In September 2011, I started a completely new course of treatment that included nine pills and two injections daily. These drugs, called second-line medications, are more toxic than the standard first-line drugs, as they are used to treat resistant bacteria. I would need to take this new regimen for 18-24 months, depending on how well they worked. By my second month on the new treatment, my tests showed that the medication was working.

“There were times that I was ready to give up, but the Texas DSHS Project Juntos nurses always encouraged me to make sure that I continued with my treatment.”

Finally, I completed treatment on November 28, 2012. The most significant side effects from these toxic medications included stomach pain, nausea and vomiting, and skin irritation. I now have profound deafness from the medication and have to wear hearing aids. But I am thankful for finally being healed and being alive.

As health care providers, some of us don’t think that we’ll ever be on the “other” side, someone with a serious disease. We think of ourselves as the ones giving treatment, providing care to patients. We need to learn to take care of ourselves, and pay more attention to diseases and illness, and give them priority over other things in our lives.

There were times that I was ready to give up rather than to continue with treatment. I lost a lot of things during the time I had TB. I did not have an income for 14 months. I lost my house, and we had to live with my brother. But I had the support of my family, friends, co-workers, and the staff from Project Juntos, who never left me alone. Thanks to the Texas DSHS Project Juntos staff, I was able to continue the ordeal of taking TB treatment for 18 months. And I found the strength to tolerate the painful and lengthy treatment because of my children.

The message I want to share is that TB is a serious disease, but if treated promptly and adequately, it can be cured. Taking care of one’s health is so important in preventing a disease from getting out of control or contributing to other conditions. I now take care of myself. My diabetes is under control, I follow a good nutritional regimen, take medication on schedule, and I rest and don’t abuse my health. Now that I’m recovered, I am working again. But my recovery would not have been possible without the help of the nurses in the Texas binational TB program Project Juntos.