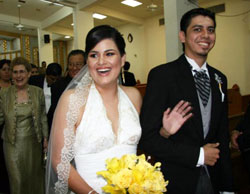 Liliana with her husband on their
wedding day

Liliana was diagnosed with multidrug-resistant (MDR) tuberculosis (TB) in 2009. She does not recall ever being exposed to anyone with TB disease as a child or as an adult.

In October 2008, Liliana was excitedly preparing for her wedding. Throughout that year, she had been working very hard and going to the gym so she would look her best for the wedding. But shortly before her wedding date, she started coughing.

Not wanting to be sick for her big event, she went to see a doctor and was told she had bronchitis. The doctor gave Liliana a shot of antibiotics and prescribed an inhaler. Liliana’s symptoms went away and she quickly felt better. But in December, after her honeymoon, her cough came back even worse. Deciding it was time to see a specialist, she went to a pulmonologist. He sent Liliana to get a chest x-ray, and also prescribed an inhaler and antibiotics. Liliana says, “I was better for a while and never heard back from the doctor.”

In February, her cough returned. Liliana scheduled another appointment with the same pulmonologist. “This time when the nurse came in, she was wearing a mask,” said Liliana. “I found out that the doctor had looked at my x-ray. He sent me to get blood work and sputum tests done. And that is when it all started.”

She was immediately contacted by Fort Bend County Clinical Health Services. She was told that her tests revealed she had TB disease, and she needed to go to the clinic to begin treatment.

This was not the first time Liliana had been on treatment for TB. When in high school, she underwent tuberculin skin testing, a requirement for her school’s admission, and the result was positive. Further testing had shown she did not have TB disease, which makes you sick and can be spread to others. Rather, she had latent TB infection. People with latent TB infection do not feel sick, do not have any symptoms, and are not infectious. At that time, Liliana was put on isoniazid preventive treatment for 6 months to keep the infection from becoming TB disease. She thought nothing further about TB for years. However, this time her experience was very different.

Because TB disease of the lungs is infectious until adequately treated, she learned that she would have to leave work for a few weeks. “I couldn’t just ‘leave’ work, but I had to,” says Liliana.

At her office, everybody was informed, via e-mail, that someone in the workplace had TB. “Of course people who worked around me all knew it was me.” TB skin tests were done on all employees; luckily no one in her workplace was found to have either latent TB infection or TB disease.

“My advice to someone who is recently diagnosed with TB is to have patience. There is hope and there is a cure, but you must be patient during your treatment.”

Liliana began treatment for TB disease, which typically takes 6 to 9 months to complete. After 3 weeks of staying home and taking her medication, she was relieved to be allowed to go back to work. It was a shock to hear 2 weeks later that her TB disease was resistant to most of the medications she was taking. Liliana was diagnosed with MDR TB, which is caused by TB bacteria that are resistant to at least isoniazid and rifampin, two of the most effective TB drugs.

Because MDR TB is much more difficult to treat, she was sent to the Texas Center for Infectious Disease (TCID) hospital in San Antonio for further evaluation. The doctors there would determine what other drugs they could give her for treatment. She did not know how long she was going to be there and was confused and anxious. “I was in denial and mad at everybody,” she shares. Although it was frightening, her husband was supportive in every respect. “The entire experience brought my husband and me closer. He was my biggest supporter, as was my family.” Luckily, part of her family lived in San Antonio, which was very helpful.

Unfortunately, the treatment Liliana took in high school for TB infection was not effective against the drug-resistant bacteria. Liliana’s doctors told her that it was possible that all the stress and exhaustion leading up to her wedding could have suppressed her natural immunity and lessened her ability to fight off the TB bacteria that were still in her body.

Because MDR TB is much more difficult to treat than regular TB, Liliana was in the hospital for 2 months. It was a hard time for Liliana. Her treatment required taking many pills and getting two painful shots every day. In addition, she was having unpleasant side effects from the drugs. Her medical team decided to give her a peripherally inserted central catheter (PICC) line, which made it easier to inject the drugs and draw blood.

After being released from the hospital, Liliana was able to return to work since she was no longer infectious. However, she still had to receive treatment at home for the next 16 months. Fortunately, the local TB control program was there to give her the help she needed. Because TB disease is so serious, and missing some doses can lead to the development of drug resistance, CDC recommends directly observed therapy (DOT) for all TB patients. This ensures that every dose is taken and documented by a health care worker. This was even more important for Liliana because she already was resistant to several of the TB medications. Liliana explained that because taking 14 pills a day was too much to take at one time, the local TB control program worked to accommodate her schedule. They broke up the regimen so she could take half her pills in the morning and the other half in the evening. “A volunteer would be at my house at 6 in the morning. Then after work I would come home, and a nurse would be waiting for me as I took my other pills,” she explains.

The side effects were challenging for Liliana as she continued working during her treatment. “I was often drowsy and tired. I would come home from a long day of work, but instead of being able to relax, I would have more medication to take,” she says.

But the TB control program workers were supportive and helped her get through it. “All the staff were friendly and always laughing and making the best of it.”

It took 1 ½ years for Liliana to complete her treatment. “To this day, I still keep in contact with the TB control program workers. If I have a cough, I let them know, so I can be checked and make sure I don’t have TB again,” she says.

Liliana adds, “My advice to someone who is recently diagnosed with TB is to have patience. There is hope and there is a cure, but you must be patient during your treatment.”