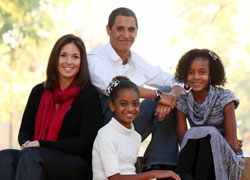 Danielle, Esteban, and their daughters

Esteban and Danielle adopted two girls from Ethiopia, one of whom was found to have tuberculosis (TB). Moreover, their daughter had multidrug-resistant TB (MDR TB); MDR TB is TB that is resistant to two or more of the most important TB medicines. With the help of a TB nurse from the South Carolina TB Control Program, their daughter received the life-saving treatment she needed. This is their story.

In 2007, Esteban and Danielle decided to adopt and were particularly interested in international adoption. After working with an adoption agency and waiting for 2 years, they finally received the exciting news that two young Ethiopian girls were available.

However, excitement turned to apprehension when they arrived in Ethiopia and the adoption agency told them the somber news that the older girl Anna (not her real name) had TB. “The news completely took us by surprise; we were unprepared for it,” recalls Esteban.

Anna’s chest x-ray showed an ominous dark spot – a possible sign of TB disease. Much to their dismay, they learned that Anna was still sick. “Tammy explained to us what TB was and that it had become contagious and that our daughter would need treatment,” says Esteban.

Anna was started on standard treatment for TB disease, but the family soon learned that she had MDR TB and was resistant to these drugs. This meant that Anna would have to take a different treatment regimen that included harsh, expensive, less effective drugs in order to be cured. In addition, she would need to have a medical pump inserted to have the drugs administered.

“Tammy (the nurse consultant) explained to us what TB was and that it had become contagious and that our daughter would need treatment.”

TB treatment is normally free of charge to TB patients treated at public health TB clinics, but Anna needed to take expensive and nonstandard medicines. Her parents were faced with paying for these expenses out of their own pockets. However, Tammy knew what to do. With decades of experience as a TB nurse, she was able to get the family into a program that provided the needed treatment free of charge. Tammy also made arrangements for the nurse in Anna’s school to administer the medicines.

“Through this process, we developed a good relationship with Tammy,” says Esteban. “We were getting used to having the girls in our family, and Tammy was flexible during this process. We were even allowed to take the girls to the beach for the first time.”

In November 2012, Anna’s physician declared her TB free! In total, she was on medicines for MDR TB for 3 years of her young life. During this time, Anna’s family was also tested for TB. Miraculously, none of the other three members of the family became infected with TB.

Esteban and Danielle believe that the South Carolina TB Control Program’s help made a big difference in their family’s ability to cope with this major illness while they were also adjusting to parenthood. They credit Tammy with getting the family through this trying time and with providing the essential care that cured their daughter.

“Our daughter is active and strong and playing sports now,” says Esteban. “We believe that God is doing something with her life, and she has a bigger purpose.”