What is Genomic Surveillance?

All viruses change (or mutate) as they replicate and spread in a population. Viruses that have RNA as genetic material, such as SARS-CoV-2 (the virus that causes COVID-19) and influenza, mutate much faster than viruses with DNA. Every time SARS-CoV-2 replicates, there is an opportunity for the virus to change. Many mutations do not affect the virus’s ability to spread or cause disease because they do not alter the major proteins involved in infection and transmission.

When one of these changes does affect the virus’s ability to spread or cause disease, there may be a competitive advantage over the other lineages of SARS-CoV-2. Over time, certain lineages with these advantages become more prevalent and circulate in a population. When a lineage or group of lineages have characteristics that impact public health, CDC may classify them as a “variant of interest”, or “variant of concern”.

For more information about how viruses change over time, visit Understanding Variants.

How do scientists track SARS-CoV-2 variants? 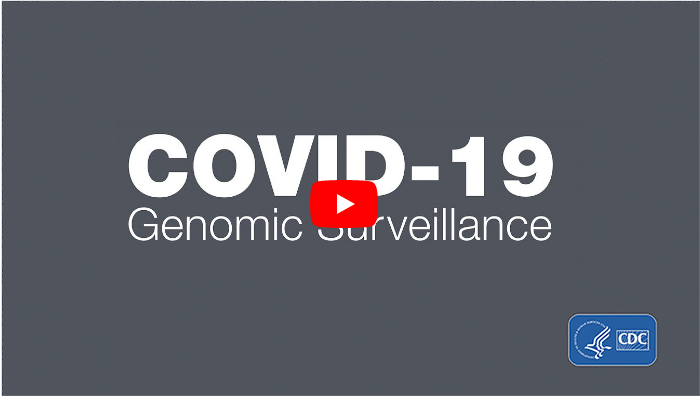 Scientists use genomic sequencing to identify which variant of SARS-CoV-2 is in a specimen. Scientists are consistently accumulating sequences and analyzing similarities and differences among these sequences in a process called genomic surveillance. Through genomic surveillance, scientists track the spread of variants, monitor changes to the genetic code of SARS-CoV-2 variants. Collectively, this information is used to better understand how variants might impact public health.

As CDC and public health partners sequence more SARS-CoV-2 genomes, we improve our understanding of which variants are circulating in the Unites States, how quickly variants emerge, and which variants are most important to characterize and monitor.

Variants in the US
Global Variants

Genes in the SARS-CoV-2 genome contain instructions to build parts of the virus. For example, the brown section in the picture has genetic instructions to build the spike protein, which attaches the virus to human cells during infection. Changes to this section could affect how easily the virus spreads and how effective vaccines are against it. Therefore scientists monitor this section closely to protect the public’s health.

Where does the data for genomic surveillance come from?

Scientists use a process called genomic sequencing to identify SARS-CoV-2 variants. Scientists sequence viral specimens collected from a portion of people who test positive for COVID-19. After a test is determined to be positive, additional time is required to prepare and sequence the viral specimen, and then analyze the sequence data. This can take anywhere from a few days to a few weeks.

Why is genomic sequencing important?

These sequences have valuable information that scientists use to:

How does genomic sequencing work?

Genomic sequencing goes beyond testing for SARS-CoV-2 and allows scientists to classify a virus as a particular variant and determine its lineage. Genomic surveillance has been a key component of public health efforts throughout the COVID-19 pandemic. Read more about the genomic sequencing process.

First, strands of DNA or RNA are extracted from the bacteria, virus, or other pathogens.

The DNA or RNA to be sequenced must be specially prepared before it can be put into the sequencing machine. The steps in the process may differ depending on the type of sample and specific equipment being used.

The library is loaded into a sequencer, which will identify the nucleotide bases in the DNA fragments.

The sequencer produces data—millions of long strings of letters—which are then assembled together or aligned with a high-quality, reference sequence. Analytical programs compare the new sequence data to the reference sequence and identify variations in the sample that allow scientists to infer an ancestral relationship, much like a family tree.

Variants of the Virus

To find more information about mutations and variants CDC is monitoring in the US and globally, go to the SARS-CoV-2 Variants page.