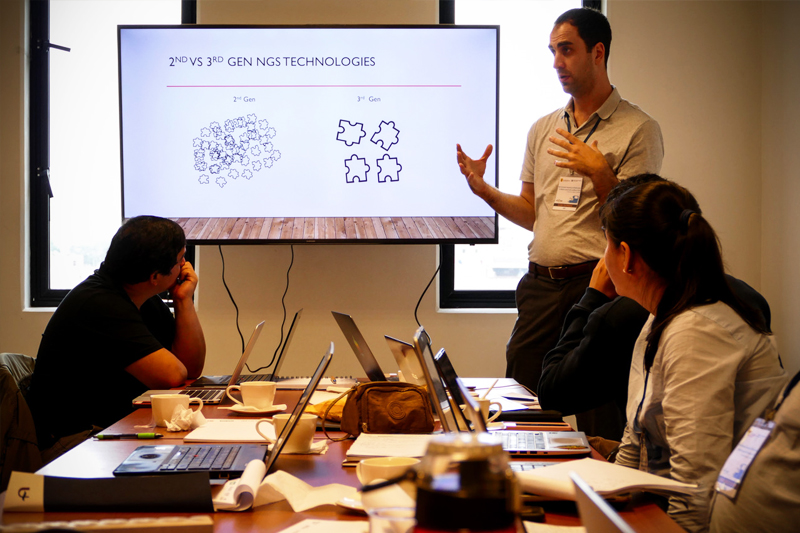 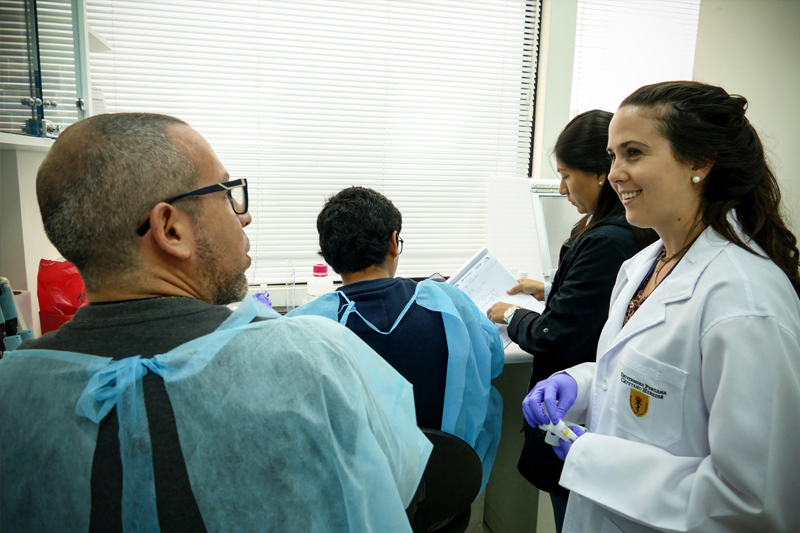 Julia Kelley, M.S., works with trainees to run samples through sequencers in the Research and Development Laboratories at Peruvian University Cayetano Heredia in Lima, Peru. 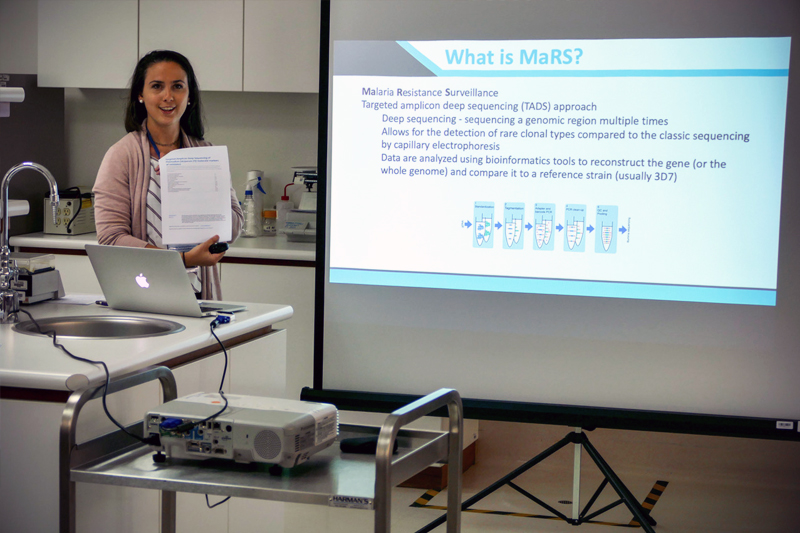 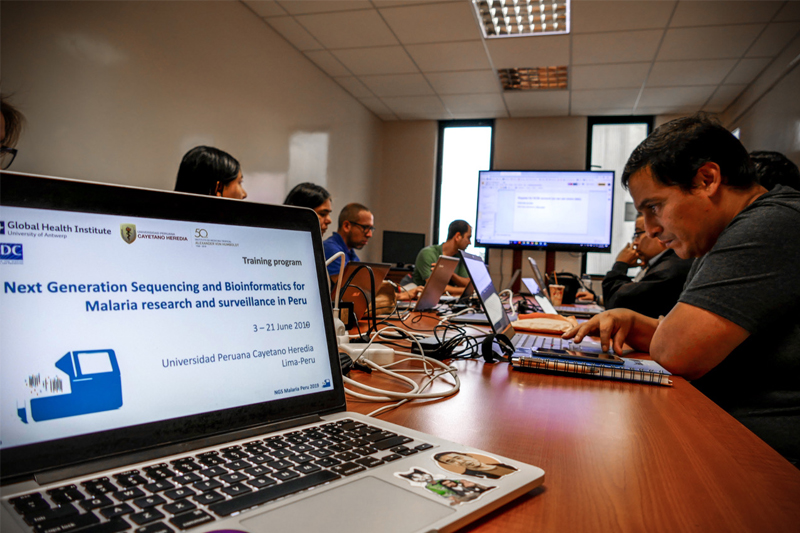 Attendees review genetic markers from the samples they sequenced during a training on next-generation sequencing.

“Previous sequencing technologies just captured the tip of the iceberg,” Talundzic says. “Now, with AMD, we can see what’s under the water.”

The training was part of CDC’s Malaria Resistance Surveillance project, or MaRS, which aims to develop and implement AMD tools in the U.S. and global partner laboratories to help identify and track drug-resistant malaria. The goal is to standardize and accelerate the flow of data used to track drug resistance, making it easier for decision makers to shape their malaria prevention and treatment guidance. Currently there can be a lag of several months between data collecting, reporting and decision making.

“We are shooting for two weeks to get from data collection to report generation,” says Talundzic.

When combined with efficacy data collected from malaria patients treated with first-line antimalarials, identifying the genes that allow some forms of the parasite to evade current therapies can tell policy makers which drugs may or may not work.

“Where AMD comes in is—for the first time—we have the tools to rapidly track markers that can be used to identify resistant parasites in specific geographic areas and help target our clinical monitoring in the field before the parasites potentially become a bigger problem and antimalarial drugs begin to fail,” Talundzic says.

Global surveillance with a local focus

Malaria is caused by the Plasmodium parasite, which is carried from person to person by Anopheline mosquitoes and transmitted when the insect bites. Molecular typing of drug resistance markers in specimens collected from malaria patients in the field is a focus for global malaria control efforts, and the new MaRS protocol being developed provides a surveillance tool for tracking drug-resistant parasites. Working with two CDC colleagues and a group of researchers from the Global Health Institute at Belgium’s University of Antwerp, Talundzic and his AMD colleagues guided more than a dozen Peruvian scientists and research assistants through this protocol.

Proving the protocol in Peru

During the two weeks of sessions in Lima, Peru, university students, professors, US Navy researchers, and members of Peru’s National Institute of Health worked with trainers to run samples through sequencers in search of genetic markers associated with drug resistance. Improved sequencing technologies, such as next-generation sequencing (NGS), has lowered costs and allowed researchers to spot those markers earlier. Six of the students had never worked with NGS before. In this hands-on training, researchers tested laboratory samples with known genetic profiles, comparing their results to the expected outcomes. They isolated the DNA, sequenced it, and analyzed the resulting data.

“It was great to have everyone see what the technology can do,” says Talundzic. “Some had not held a pipette in a long time, but every one of them was successful. This is excellent because it shows the protocols have an ease of use.”

An international community of practice

Talundzic says researchers are trying to set up regional sites to track malaria and get ahead of drug-resistant malaria parasites before they become a widespread problem. Peru’s collaboration with the CDC has given them the beginning of a common playbook.

MaRS provides a blueprint for establishing a sustainable surveillance system with its own online version-control or community of practice platform. “Another lab will be able to look at Peru’s protocols and the edits they made, what they changed and why, and now we have a protocol for any lab with equipment like Peru,” says Talundzic. “The only way to have a sustainable model is for everyone to have a voice and the opportunity to improve upon the current protocols.”

The MaRS project encourages standardization, including implementation of quality control steps and competency testing, at regional sites around the globe, which helps produce data of the highest quality. This process supports surveillance needed in local areas while also providing vital information to global surveillance efforts by WHO and other partners that monitor drug resistance.