Vaccines have helped eliminate many diseases in the United States, such as polio, but other vaccine-preventable diseases, like whooping cough (pertussis), are rebounding. Using AMD technology, CDC scientists can find shifts in the DNA of circulating bacteria and viruses that help them evade vaccines. Through this work, we can develop more effective vaccines that shift with the changing microbes. 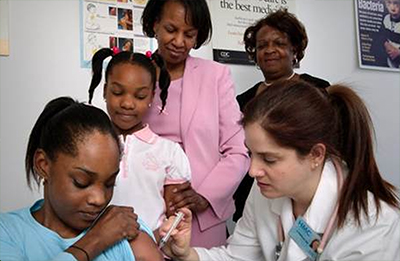 Despite the availability of vaccines against pertussis (whooping cough), the disease has rebounded to between 10,000 and 50,000 reported cases in the United States each year since 2010. Using AMD technology, CDC scientists have found shifts in the DNA of circulating Bordetella pertussis bacteria that could be contributing to the resurgence of pertussis. One bacterial component targeted by the vaccine, pertactin, is a protein believed to help the bacteria attach to cells in the throat. However, researchers have confirmed that the types of B. pertussis that cause the most illness in the United States are missing pertactin. With AMD methods, investigators are mapping the complete genome of historical and currently circulating strains of B. pertussis to determine if these genetic changes are contributing to the reemergence of pertussis.

Developing the annual flu shot is a year-round process that involves surveillance and characterization of circulating flu viruses, decisions by global influenza experts regarding which viruses should be included in the upcoming season’s vaccine, production and growth of candidate vaccine viruses used in manufacturing, and the manufacture of the vaccines in time for flu season.

With AMD, the characterization of flu viruses has been greatly enhanced, providing experts more data to support vaccine decisions. 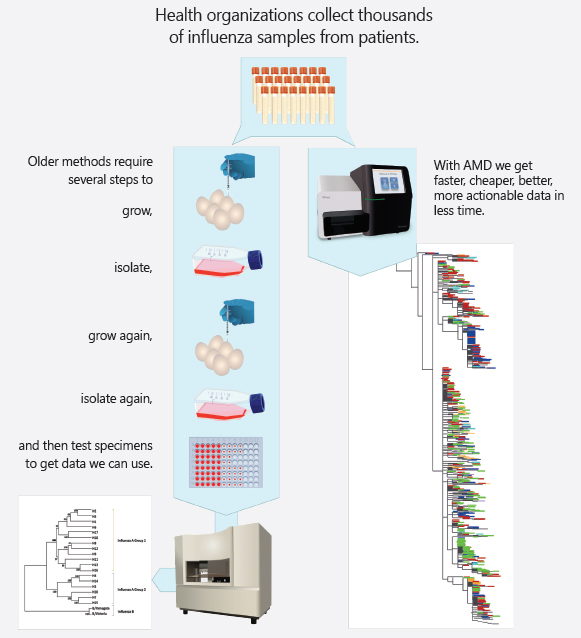