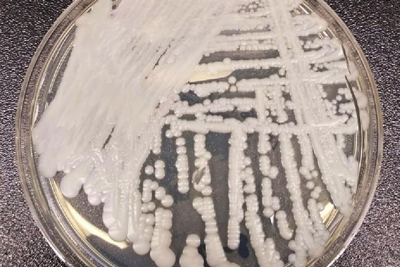 Candida auris is an emerging multidrug-resistant fungus that presents a serious global health threat. C. auris is difficult to identify with standard laboratory methods, and can be misidentified in labs without AMD technology.

In June 2016, the Centers for Disease Control and Prevention (CDC) alerted healthcare providers and laboratories in the United States to be aware of a new disease threat―Candida auris, a globally emerging, multidrug-resistant fungus. C. auris causes serious and often fatal infections, and it can strike people in the very place they seek care―healthcare facilities, including hospitals, nursing homes, and other clinical settings. However, C. auris can be challenging to identify. Standard laboratory tests sometimes misidentify it as another yeast, but advanced molecular detection (AMD) can pinpoint this fungus and provide information to help us understand how it is evolving and spreading.

Once the call went out, hospital laboratories reported suspected cases of C. auris. Several state and local health departments, together with CDC, were able to confirm that 13 patients had been infected with C. auris from 2013 through 2016. CDC scientists performed whole-genome sequencing, an AMD method, on samples of C. auris to better understand how closely they might be related. AMD showed that patients in different states were infected with strains of C. auris that were very closely related to strains identified in South America and East Asia, though the patients had not traveled to those regions. Even more troubling, AMD demonstrated that strains isolated from two patients in the same healthcare facility were genetically related, providing strong evidence that the fungus was spreading in the healthcare setting. Investigators were also able to find C. auris on surfaces within hospital rooms, suggesting that robust hand hygiene and cleaning are needed to prevent its spread. Armed with this information, CDC provided additional infection control recommendations to healthcare providers to help prevent spread of the fungus inside their facilities.

We do not know why C. auris has recently emerged in so many different locations. Using AMD methods, CDC scientists can tell that C. auris strains found within a country or region are genetically related, but that C. auris strains found on different continents are very distinct. Researchers suspect C. auris may not be a new organism, but is more likely one that is newly emerging in various clinical settings. Although the causes for such emergence are unknown, they may include new or increasing antifungal resistance in humans, animals, or the environment. With AMD, we will be able to investigate the genetic evolution of these strains and determine when the fungus might have entered the United States. In addition, AMD gives us the ability to monitor this new threat as it emerges so we can continue to look for ways to control and fight it.