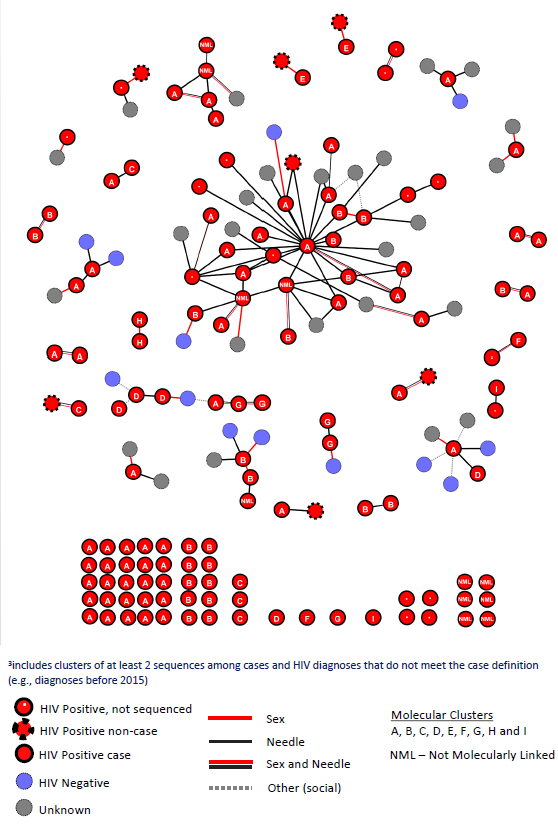 MicrobeTrace network diagram of partner interactions by HIV status and molecular cluster as of September 30, 2018. The molecular network and the network of the elicited named partnerships overlap but do not mirror each other.

A community of people experiencing homelessness, many of whom injected drugs, lived beneath an overpass north of Boston. Beginning in August 2016, they sought care at a clinic where they were diagnosed with HIV. By June 2018, the outbreak involved more than 120 people, predominantly in the cities of Lawrence and Lowell in northeastern Massachusetts. The Massachusetts Department of Public Health (MDPH) asked for CDC’s help in investigating and responding to the outbreak.

“Epidemiologists and laboratory scientists at CDC recommended using molecular data to identify genetic similarity among the infections,” said Bill Switzer, who leads the Molecular Epidemiology and Bioinformatics Team at the CDC’s Division of HIV/AIDS Prevention. “In doing so, MDPH recognized that the outbreak was spreading quickly and that it involved people outside of Lawrence and Lowell as well as HIV-infected persons who did not inject drugs.”

CDC and health departments use molecular analysis to identify transmission clusters that might not be recognized with traditional public health tools and to better understand networks experiencing rapid transmission. The process uses HIV genetic sequences that are generated as part of routine clinical care and shared with health departments. The HIV sequences are analyzed with other epidemiologic data, giving investigators a better picture of an outbreak like the one in Massachusetts.

However, this contact information is not typically linked with the molecular information in outbreak investigations, which could provide a more complete picture of HIV transmission. One of the tools used by MDPH was MicrobeTrace. Created with support from CDC’s Advanced Molecular Detection (AMD) program, MicrobeTrace is a secure, browser-based platform that among the cases. “That allowed us to create a network diagram of the outbreak,” said Ellsworth Campbell, a computational biologist on Switzer’s team. Using both the genetic and interview data improved the understanding of a complex transmission network connected by sexual partnerships and injection drug use.

MicrobeTrace helped MDPH understand the true extent of the outbreak, leading to the discovery that 55 percent more people were affected than the health department had previously realized, Switzer said. This allowed local health officials to ensure that needed public health services were delivered to the full group of people affected.