AMD and One Health: Responding to a multistate, multidrug-resistant disease outbreak 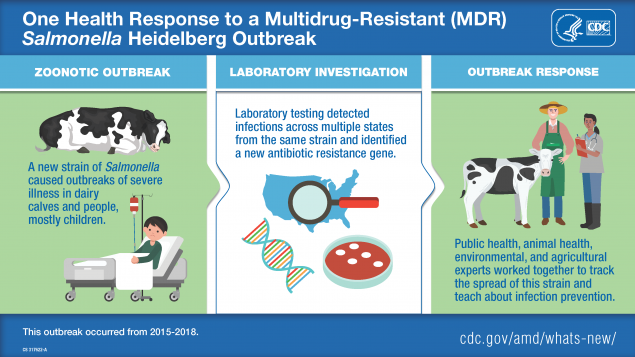 A new strain of Salmonella caused outbreaks of severe illness in dairy calves and people, mostly children. Laboratory testing detected infections across multiple states from the same strain and identified a new antibiotic resistance gene. Public health, animal health, environmental, and agricultural experts worked together to track the spread of this strain and teach about infection prevention. This outbreak occurred from 2015-2018.

One Health is an approach that recognizes the interconnectedness of the health of people, animals, and the environment. It involves collaboration across human and animal health, environment, and other relevant sectors. Antibiotic-resistant bacteria have developed the ability to defeat the drugs designed to kill them and are an important One Health issue. Today, advanced molecular detection technologies, such as whole genome sequencing (WGS), allow scientists to study how antibiotic resistance evolves and spreads. WGS also provides important information for responding to disease outbreaks. In a 2015–2018 outbreak of multidrug-resistant Salmonella Heidelberg, WGS revealed that the outbreak in people was connected to contact with dairy calves and calf environments.

In January 2016, Dr. Donald Sockett, a veterinary microbiologistexternal icon and epidemiologist at the Wisconsin Veterinary Diagnostic Laboratoryexternal icon (WVDL), noticed something unusual – dairy calves at some facilities in Wisconsin and surrounding states were getting sick and dying. In some facilities, 25–50% of the calves were getting sick, most often within days of purchase from a livestock market or farm. The illness came on suddenly; calves that looked healthy in the morning were dead by the afternoon. Initial WVDL testing showed that the calves were carrying a strain of Salmonella serotype Heidelberg bacteria. Dr. Sockett and his veterinary colleagues study Salmonella from cattle in Wisconsin and other states. None of them had ever seen a Salmonella strain that caused such a rapid onset of illness or such a high death rate in calves.

A strong local One Health partnership

To gain a better understanding of the Salmonella Heidelberg bacteria causing illness and death in calves, WVDL asked its public health partners at the Wisconsin Department of Health Servicesexternal icon (WDHS) to test bacteria sampled from sick calves. The public health laboratory tested the Salmonella Heidelberg bacteria using pulsed-field gel electrophoresis (PFGE), which provided an initial DNA fingerprint of the bacteria. That’s when the scientists discovered that the bacteria collected from sick calves matched bacteria collected from people sickened in an ongoing outbreak of human Salmonella Heidelberg infections. The strain caused severe illness with rates of bloodstream infections and hospitalizations higher than usual for Salmonella. Initial antibiotic susceptibility testing in Wisconsin showed that the samples from both calves and people had the same multidrug-resistant patterns.

The role of whole genome sequencing

Next, Wisconsin veterinarians and public health officials asked CDC to assist with characterizing the Salmonella bacteria strains using a molecular technique known as whole genome sequencing (WGS). WGS helped scientists identify and understand the bacteria in a more detailed and precise way than PFGE could.

CDC’s PulseNet team examined WGS data from Salmonella Heidelberg strains from Wisconsin and other state laboratories. Many strains that appeared to be different using PFGE testing were found to be genetically similar when compared using WGS, indicating that the strains were all related. CDC also determined that the Heidelberg strain was making people sick in several other states.

Slowing the spread of disease 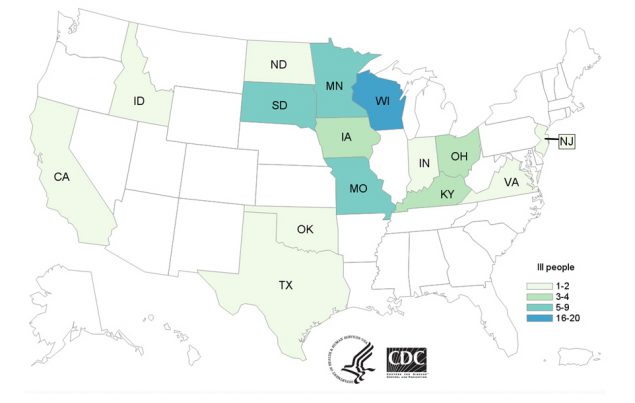 Outbreak investigators used WGS to track illnesses caused by the outbreak strain in 15 states across the country. Epidemiologic investigations confirmed the connection between sick people and contact with cattle. Many ill people had contact with dairy calves after buying them at sale barns and livestock markets.

In addition, animal health officials from Wisconsin and the U.S. Department of Agriculture (USDA) took environmental samples at a livestock market, farms, and other facilities to detect areas where Salmonella Heidelberg was present on surfaces. This helped them determine where to target enhanced cleaning and infection control procedures. Animal health officials also visited veterinarians and livestock producers to provide educational information and technical assistance pdf icon[PDF-2 pages]external icon on how to control the spread of the outbreak.

By using a One Health approach to communicate, collaborate, and coordinate response efforts, laboratory scientists, veterinarians, public health authorities, and educators on animal and human health were able to slow the spread of disease in cattle and people. Now, when Dr. Sockett investigates Salmonella outbreaks in animals, he works with public health officials to see if there might be illnesses in people with the same strain of Salmonella bacteria. He continues to use this story when providing outreach to veterinarians and livestock producers about antibiotic stewardship, infection control, and the potential impacts on human, animal, and environmental health.

Wisconsin’s public health, veterinary, and environmental health partnership exemplifies the strong One Health collaboration that helps track antibiotic resistance and identify multistate outbreaks. Lessons from this outbreak of multidrug-resistant Salmonella Heidelberg infections have shaped practices to identify, control, and prevent outbreaks that threaten the health of both animals and people.