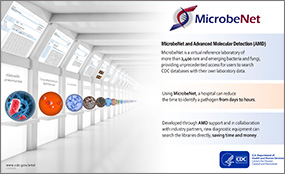 CDC’s MicrobeNet is an online tool that helps clinicians and scientists identify bacteria and fungi that make people sick. Designed as a massive database, MicrobeNet opens up CDC’s data on microbes, making them available to hospitals and state and local health laboratories. This system provides access to crucial information that can help identify disease outbreaks, track new and emerging diseases, and develop new ways of responding to illnesses. With AMD, CDC scientists have expanded MicrobeNet to include 2,400 species of microorganisms—more than tripling the number available when MicrobeNet started. In addition, they partnered with Bruker Corp., bioMérieux, ThermoFisher, and Names for Life to give labs additional ways to search and compare bacteria to rare pathogens in CDC’s library, which will make it easier to identify emerging outbreaks quickly.

Where can you find a library of information on the most unique microorganisms? Using MicrobeNet, Public health laboratories around the world can run diagnostic tests and match results against CDC’s unique collection of pathogens.

Coughing? It could be whooping cough, the flu, pneumonia, or a slew of other respiratory illnesses. And new diseases, such as Middle East respiratory syndrome (MERS), are lurking on the horizon. During an outbreak, medical or public health professionals can have a difficult time quickly determining what’s causing respiratory illnesses. This is why CDC brings together highly skilled epidemiology and laboratory experts to form the Unexplained Respiratory Disease Outbreaks (URDO) work group. CDC epidemiologists look at the characteristics of the disease and patterns of an outbreak. CDC laboratory scientists help solve disease mysteries by identifying the pathogen causing an outbreak. To speed up pathogen identification, CDC is using AMD methods to develop a new tool to quickly identify which pathogen—including new or rare ones—is causing an outbreak. With targeted sequencing analysis, scientists can rapidly identify pathogens in respiratory specimens from URDO responses and see characteristics, such as whether they are resistant to antibiotics, which are important for effective treatment. 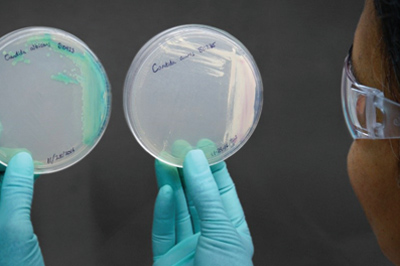 A strain of Candida auris cultured in a petri dish at CDC.

When antimicrobial-resistant Candida auris infections were identified in the U.S. healthcare system for the first time, AMD methods were used to track transmission pathways. C. auris is a fungus that can cause serious and frequently fatal infections in the healthcare setting. AMD technology revealed strains that were closely related to each other, which helped investigators understand how C. auris was spreading in healthcare settings. CDC is using AMD to detect and analyze this fungus by studying detailed DNA fingerprints of C. auris from specimens collected in the regions where it was first identified. These investigations have revealed that the fungus seemed to emerge simultaneously in eastern and southern Asia, southern Africa, and South America. In addition, scientists are discovering that DNA from specimens within each region are quite similar to one another, but are relatively different across regions, suggesting C. auris emerged independently in multiple regions at roughly the same time. But no one is certain how C. auris appeared in different places at the same time, why we are seeing it now, what part of the environment it came from, or how it began infecting people. Using AMD methods, scientists hope to devise ways to track and stop the spread of this deadly pathogen.