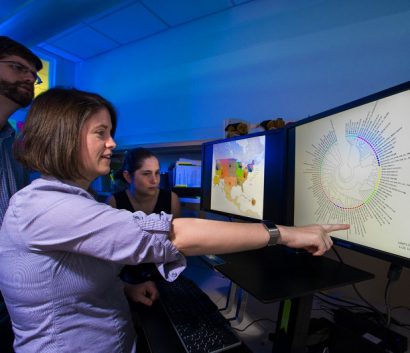 Finding problems in our food supply and improving our food safety systems prevent illness and saves lives. This year, the PulseNet national laboratory network is transitioning from pulsed-field gel electrophoresis (PFGE) to whole genome sequencing (WGS) to combat foodborne diseases more effectively. PulseNet public health scientists from laboratories across the United States will now have the tools to generate, analyze, and share their WGS results of foodborne bacteria with the other network participants.

For over 20 years, PulseNet has used a DNA fingerprinting technology called PFGE to detect and help solve foodborne disease outbreaks. Using PFGE, PulseNet prevents an estimated 270,000 illnesses and saves at least half a billion dollars in medical costs and lost productivity each year. The transition to WGS will help us combat foodborne diseases with increased precision by providing public health scientists with more detailed information for foodborne pathogen characterization. WGS helps investigators find outbreaks that would be difficult to find using just PFGE. For instance, in 2018, a Salmonella outbreak causing illness in more than 436 people was linked to contaminated ground beef. The bacteria had a common PFGE pattern, but the higher precision of WGS showed that not all cases were actually matches associated with the ground beef. Additionally, other PFGE patterns were found to be related by WGS that may not have been included using PFGE alone. This level of precision helped investigators accurately define which ill people were part of the outbreak, guiding federal partners to recall more than 12 million pounds of beef products.

Of course, outbreaks are not solved by WGS alone. Bioinformaticians, who are WGS data experts, design computer programs to translate the large amounts of data produced by WGS into a format that public health scientists can combine with other outbreak information such as:

Many states use WGS to look for clusters of illnesses linked to food or animal contact, including Salmonella, E. coli, and Shigella infections. A full transition to WGS for routine surveillance is happening now.  CDC anticipates that using WGS as the PulseNet standard will allow us to identify and solve more outbreaks and prevent more foodborne illnesses.