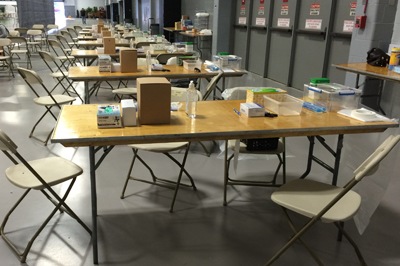 Typically, people have less than a one in a million chance of getting serogroup B meningococcal disease. However, in February 2015, students at a small northeastern U.S. university found their odds increasing to approximately one out of every 2,500 after just two students, with no known contact to each other, came down with the disease. Soon after, a separate outbreak of serogroup B meningococcal disease occurred at a large northwestern U.S. university. Over the course of four months, this outbreak had tragic consequences—one student died and another seven were hospitalized.

Fortunately, two new vaccines against serogroup B meningococcal disease (MenB vaccines) have been licensed in the United States to help protect against one type of the germ that causes meningococcal disease, Neisseria meningitidis serogroup B. The affected universities quickly responded to these outbreaks by vaccinating their students.

Officials wondered if these new vaccines would also help protect against the carriage of the bacterium, when the germ grows in the back of the nose and throat without causing any disease. In the case of N. meningitidis, public health officials believe that about one out of every 10 people carry the bacteria at any given time. Reducing carriage can protect even those people who aren’t vaccinated by reducing the spread of the germ. The vaccine campaigns conducted at these universities offered a unique opportunity to study the effects of MenB vaccination on carriage.

However, performing carriage studies in no easy task. In this instance, CDC needed to analyze thousands of samples collected from students to see if they were carrying the bacteria and to compare the DNA of the carried bacteria with the DNA of the outbreak strains to see if genetic links were present. That’s where advanced molecular detection (AMD) methods came into play.

Before AMD, laboratory methods to compare strains provided limited information and were time-consuming and labor intensive. AMD methods changed all of this. CDC’s Bacterial Meningitis Laboratory, with aid from the Biotechnology Core Facility Branch and National Center for Immunization and Respiratory Diseases’ Bioinformatics Support Team, used whole genome sequencing to better understand outbreak strains and carriage at these universities. AMD allowed for more sophisticated, in-depth strain comparison between the germs found in carriers and those that caused the outbreak. AMD also allowed the lab to see whether there was any connection to N. meningitidis serogroup B strains that have been seen on other college campuses in the past few years and look at general carriage rates of N. meningitidis among U.S. college students.

And this work continues. CDC will conduct a final round of the carriage study at each university in fall 2015 and use AMD methods to examine what impact, if any, new MenB vaccines had on the carriage of N. meningitidis in the student population. Studies like these are helping revolutionize CDC’s response to outbreaks.