CDC’s Influenza Division developed a rapid and reliable viral genomic sequencing kit called the Mobile Influenza Analysis (MIA). MIA is a portable influenza (flu) laboratory that can determine which flu strain is circulating on-site. The kit produces real-time data that can be used to evaluate whether a virus is new, what the associated public health risk is, and whether influenza vaccines against the circulating strain are available. These are key components to detecting and responding to new influenza strains and containing outbreaks before they start.

Investigating an influenza outbreak in Louisiana

The 2019–2020 influenza season began early in Louisiana with a large outbreak in the New Orleans area. CDC studied samples from New Orleans and determined they belonged to a specific group of influenza B Victoria viruses. While this group of viruses has been seen before, the amount of flu activity in Louisiana was concerning to CDC’s Influenza Division.

A team of CDC staff traveled to the outbreak zone in November to work with Louisiana state public health officials. The team brought MIA , the portable flu laboratory, to investigate the cause of the outbreak. In less than 24 hours, the team tested 89 samples and confirmed that 87 of them were B Victoria viruses. The team also produced full genome sequences of some of these viruses on-site and within hours after sample preparation. CDC staff then compared the outbreak sequences with recently circulating viruses. They determined that the outbreak viruses were very similar to other viruses seen months earlier in Washington state and were not a newly emerged group of viruses with pandemic potential. This was a reassuring finding to public health officials.

Influenza A virus surveillance at a swine exhibition event 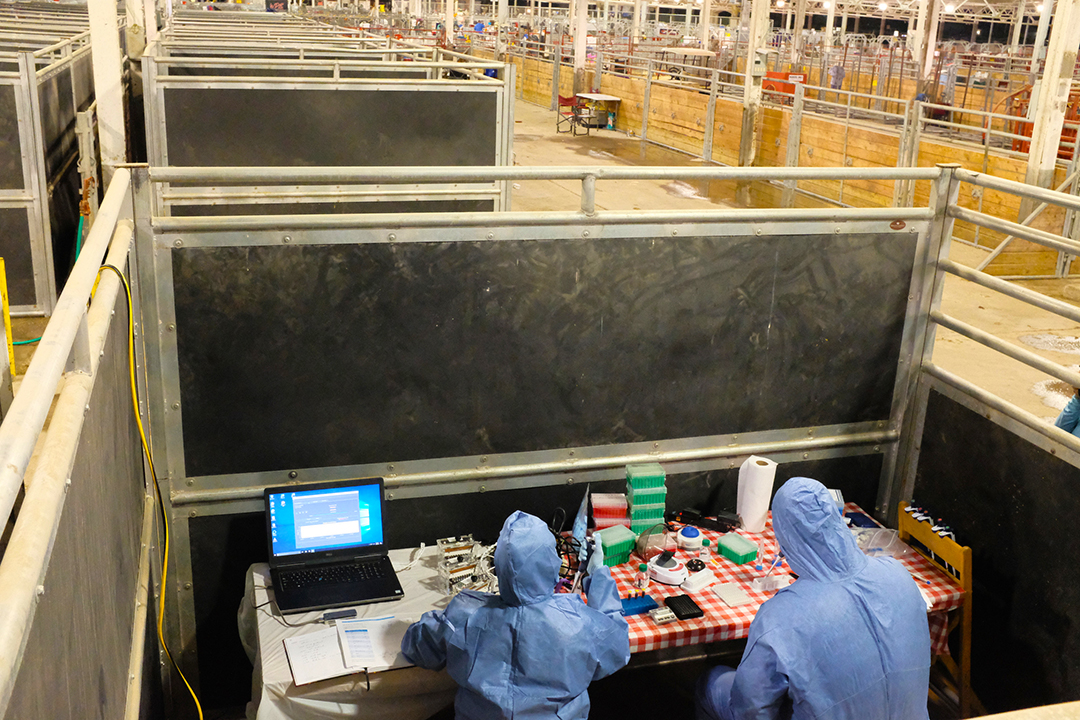 In a recent field test at a large swine exhibition, MIA was used to sequence and analyze swine influenza A virus (IAV) samples from pigs. Traditional sequencing methods normally take over a week, given the need to ship virus samples to the laboratory for sequencing. The deployment of MIA for the field test resulted in the on-site identification of three genetically distinct swine IAV lineages in less than 15 hours. Working overnight in a horse stall, CDC scientists used mobile sequencing technology to generate rapid genomic surveillance data. The team electronically transferred the sequence data to CDC, where a synthetic candidate vaccine virus (CVV) was developed before the first human case of the outbreak strain was identified. CVVs are flu viruses that have been prepared for vaccine manufacturers to aide them in producing a flu vaccine.

The ability to use sensitive diagnostic and genomic equipment at the site of an outbreak is a major advancement for public health because it greatly decreases response times and allows rapid risk assessments of viral outbreaks. In addition to being useful during outbreak responses, this portable technology can also widen surveillance networks in a more affordable way than conventional genomic approaches. This new technology is a breakthrough for pandemic preparedness and global health security.