2019: AMD leads to better analysis and tracking of Cyclospora, a challenging pathogen responsible for two high-profile foodborne outbreaks in 2018 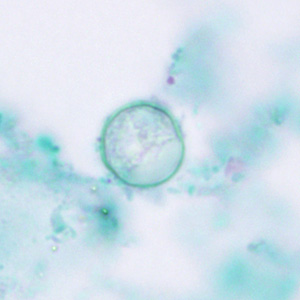 Cyclospora cayetanensis is a one-celled parasite that causes intestinal infections. It is a particularly challenging pathogen to analyze, but thanks to AMD and a prototype typing tool that creates a “DNA fingerprint,” it may become easier for disease detectives to crack the code on Cyclospora outbreaks.

Being able to quickly detect clusters of illnesses caused by the same strain of Cyclospora is critically important in investigations to determine where these parasites get into the food supply and how consumers become infected. CDC scientists in the Division of Parasitic Diseases and Malaria (DPDM) have been developing methods to genetically type Cyclospora cayetanensis since the AMD program began in 2014. But to create a typing tool, scientists first had to sequence the very large and complex Cyclospora genome to identify suitable molecular markers to fingerprint the parasites.  This required new laboratory techniques because Cyclospora parasites cannot be grown in the lab, and they have a hard, resilient exterior that makes them difficult to break open to extract the DNA.

In the summer of 2018, the new methods were ready to be tested. Coincidentally, state and local public health laboratories across the United States began reporting a record increase in domestically acquired Cyclospora illnesses, including two multi-state outbreaks linked to prepackaged vegetable trays and fast food salads that sickened more than 700 people. The CDC researchers had expected to receive, at most, 200 samples of Cyclospora for the entire May-August season, which is the typical season for cyclosporiasis in the US. However, at the peak of the 2018 outbreaks, they were receiving around 120 samples each week.

The new typing tool compares eight markers in the parasite’s genome. Based on these markers, the probability that two samples are related to each other is calculated so that similar samples can be grouped together. Because this process works better when you have more samples to compare, the unusually large number of samples received in 2018 helped researchers to evaluate and improve the tool for future use.

CDC scientists are prepared to type Cyclospora samples in real time during the 2019 Cyclospora season to evaluate the new tool’s utility for outbreak detection. They’re also working to standardize the typing process at state public health laboratories across the United States to ensure that the methods are easy to use. This will require training to ensure that experts in state and local health departments can monitor and adapt to the novel technology.

In the past, detecting clusters of related Cyclospora cases relied on comparing information about foods consumed by infected people. Most cases could not be linked to clusters based on food histories alone. With this new tool, researchers hope to assist public health officials to detect more outbreaks and to learn how these pathogens are getting into the food system.