Hepatitis A incidence increased 850% from 2014 to 2018. The increase in 2018 was primarily due to unprecedented person-to-person outbreaks reported in 24 states among people who use drugs and people experiencing homelessness.

Groups Most Affected by Hepatitis A in 2018

† Indicates groups above the national average in 2018
On This Page 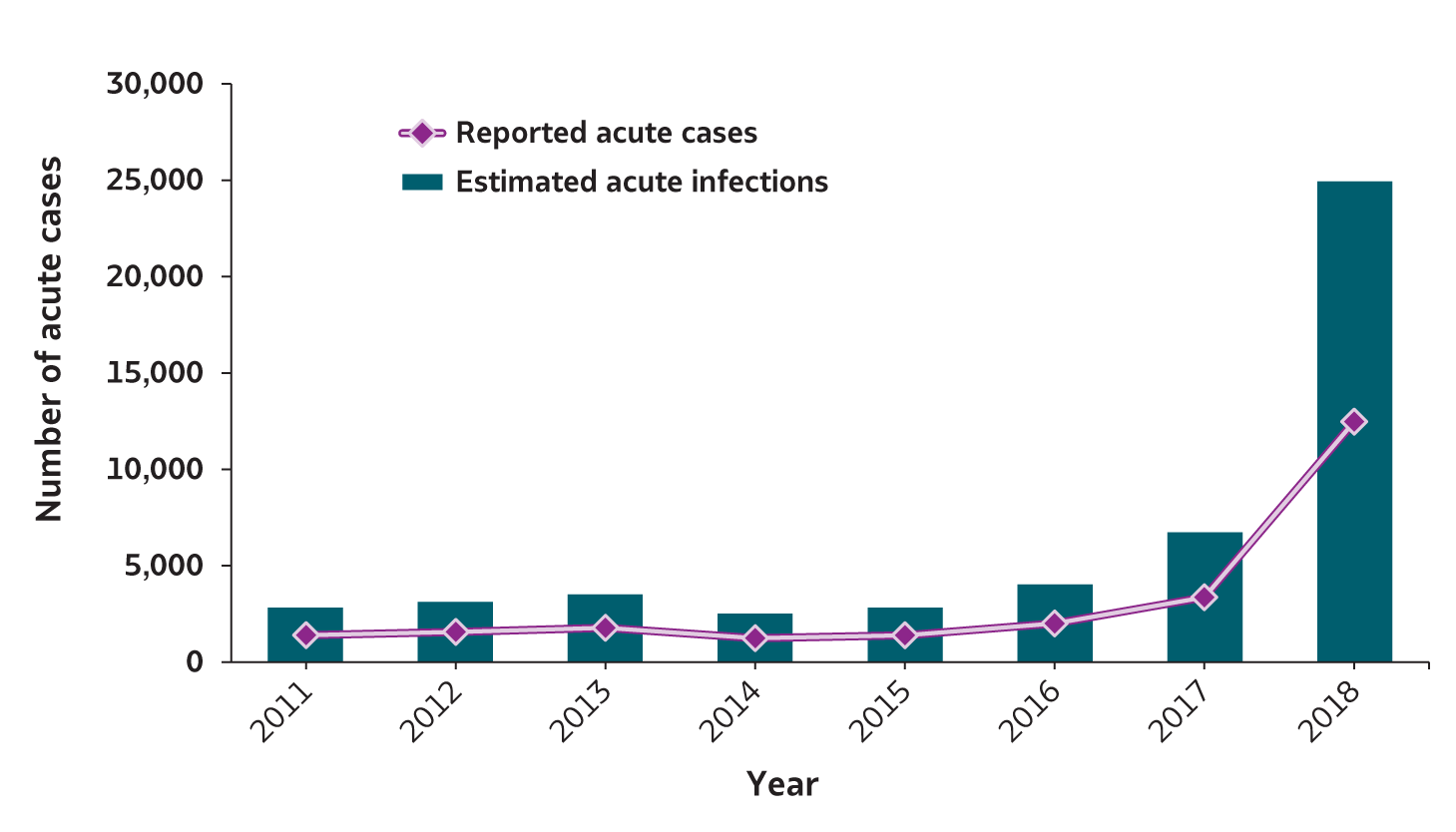 Source: CDC, National Notifiable Diseases Surveillance System.
* The number of estimated viral hepatitis infections was determined by multiplying the number of reported cases by a factor that adjusted for under-ascertainment and under-reporting(7). The 95% bootstrap confidence intervals for the estimated number of infections are shown in the Appendix.

Source: CDC, National Notifiable Diseases Surveillance System.
* Rate per 100,000 population.
† For the case definition, see https://wwwn.cdc.gov/nndss/conditions/hepatitis-a-acute/.
—: No reported cases. The reporting jurisdiction did not submit any cases to CDC.
N: Not reportable. The disease or condition was not reportable by law, statue, or regulation in the reporting jurisdiction.
U: Unavailable. The data are unavailable. 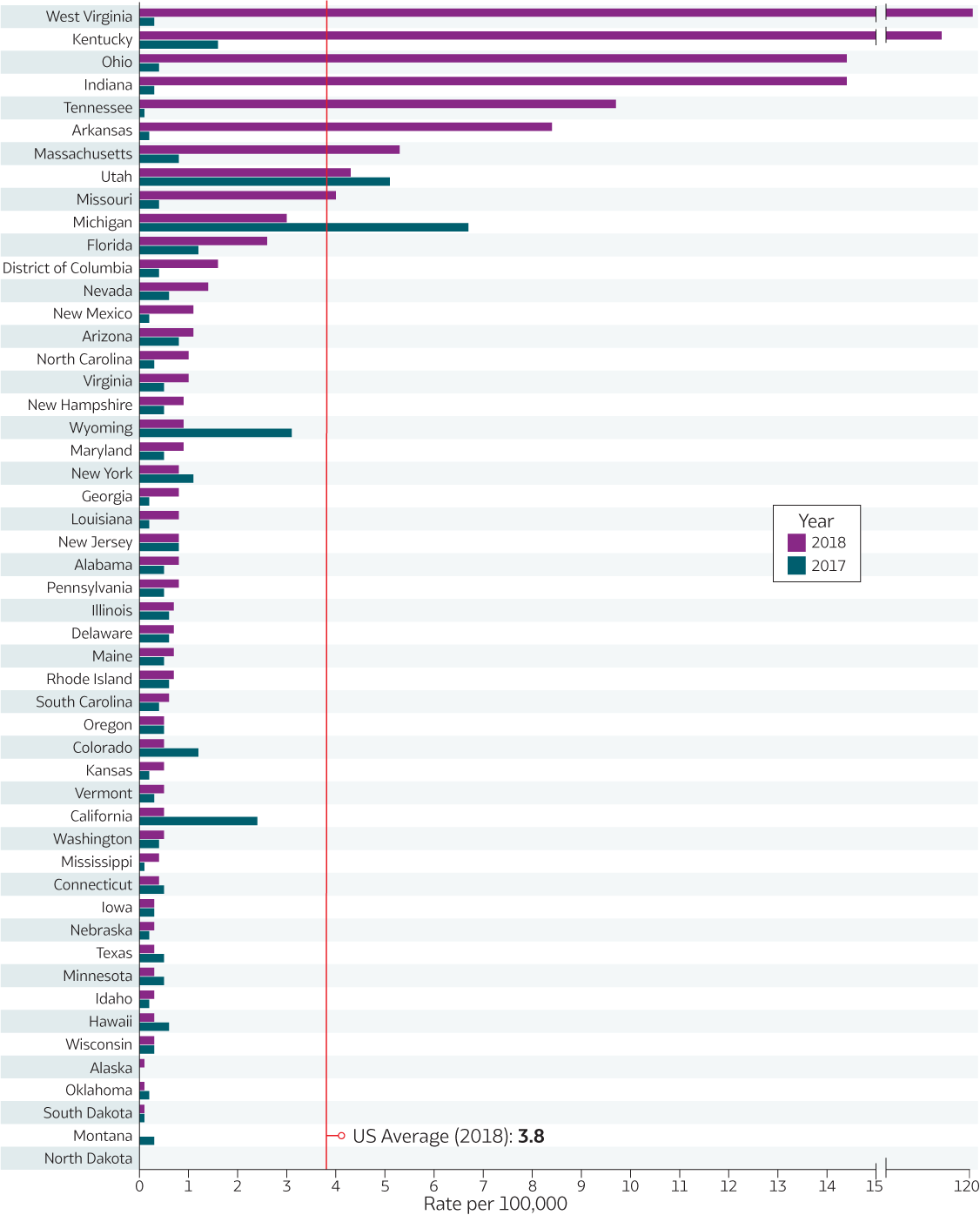 Figure 1.3. Rates of reported hepatitis A, by state or jurisdiction — United States, 2018 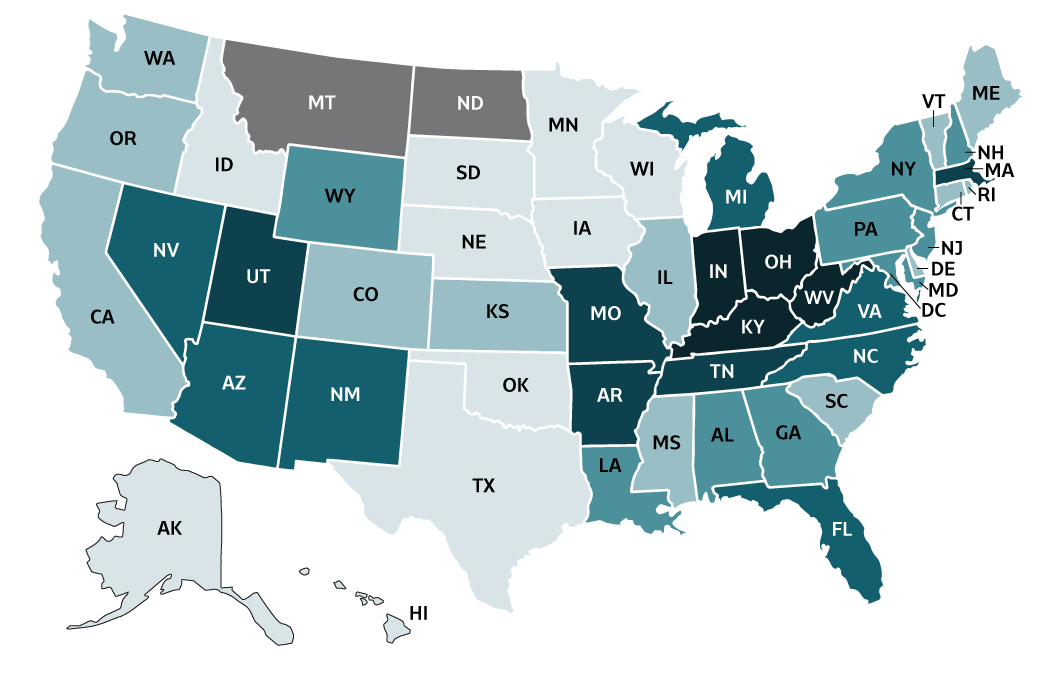 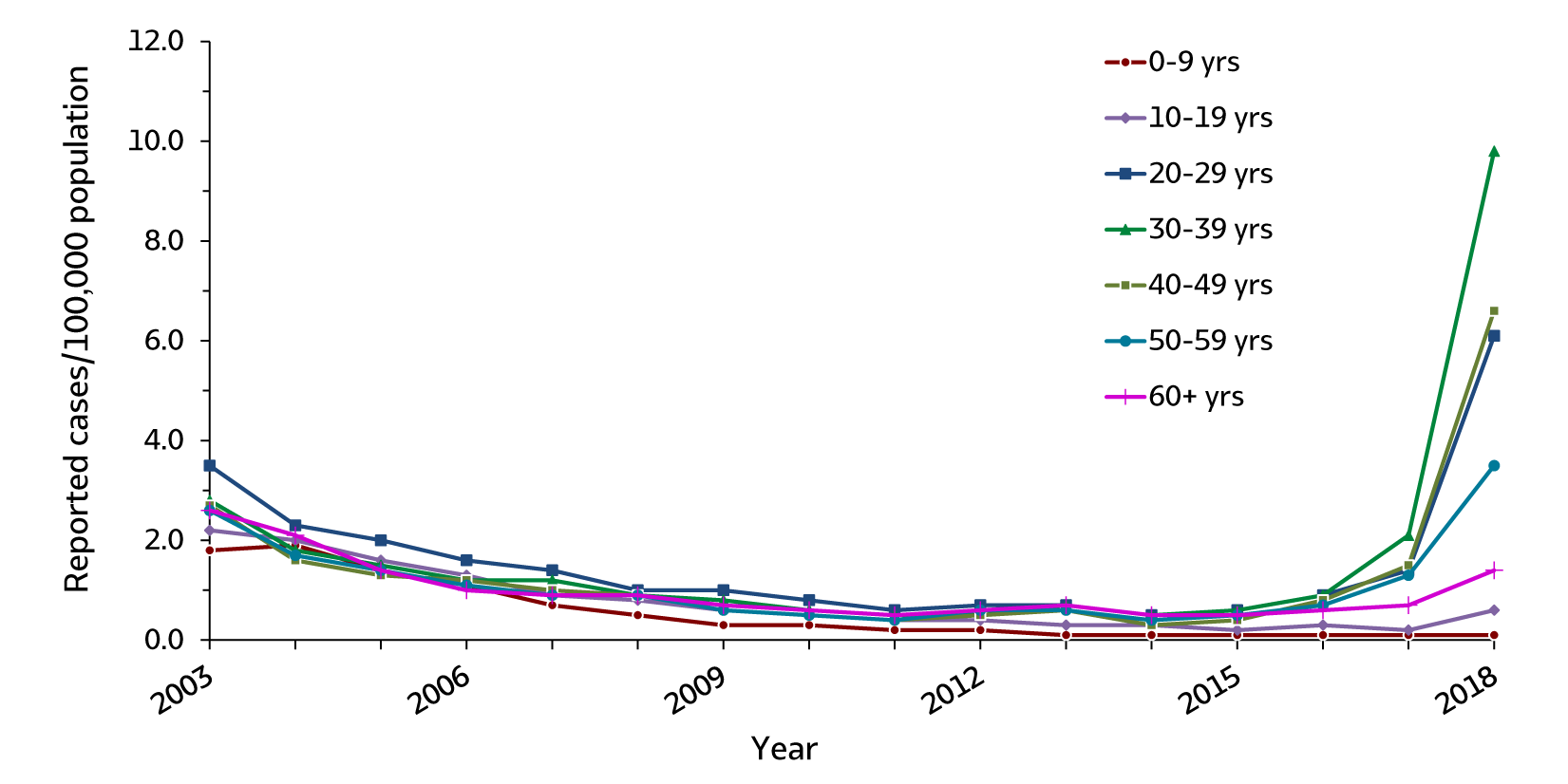 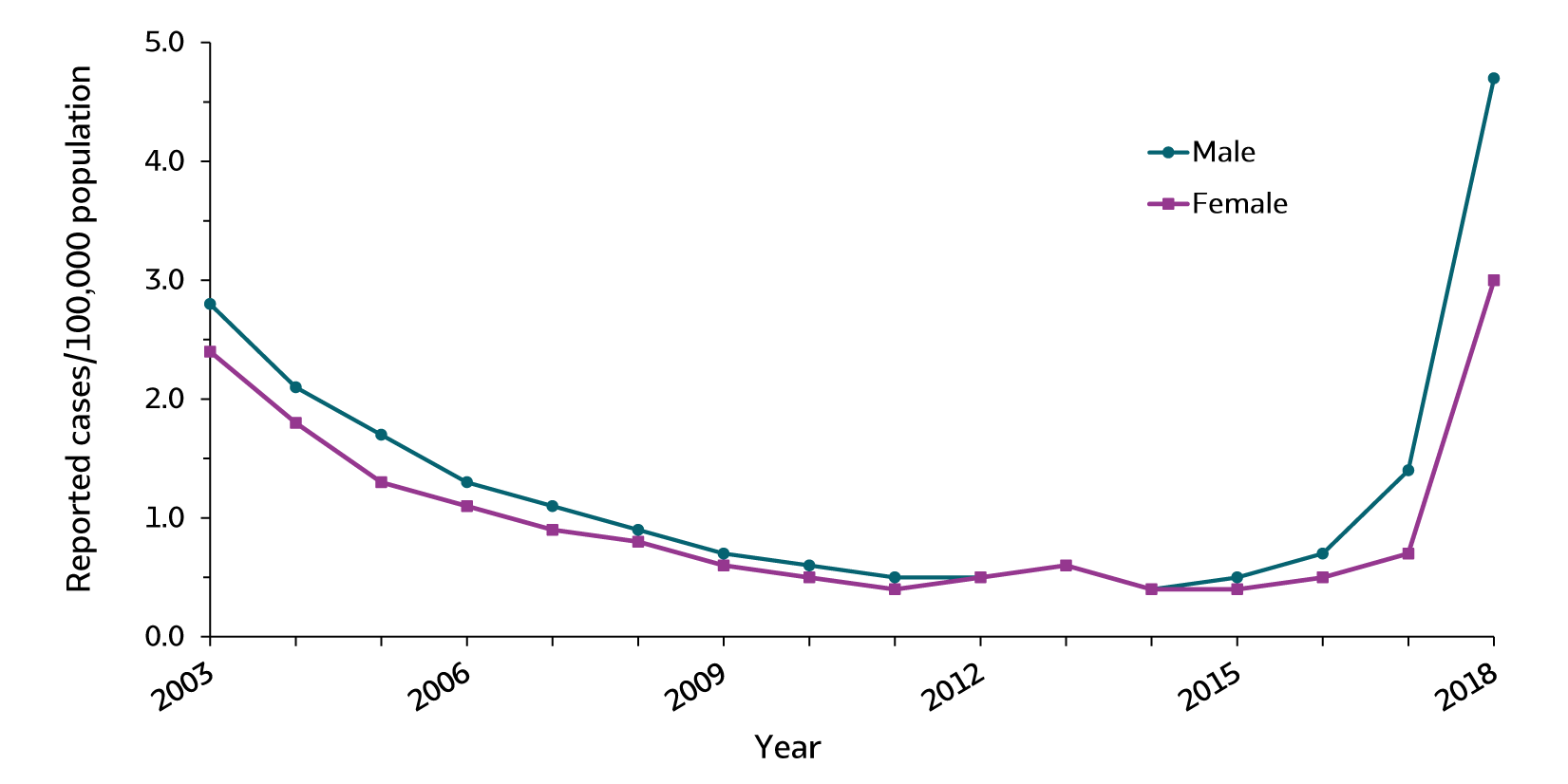 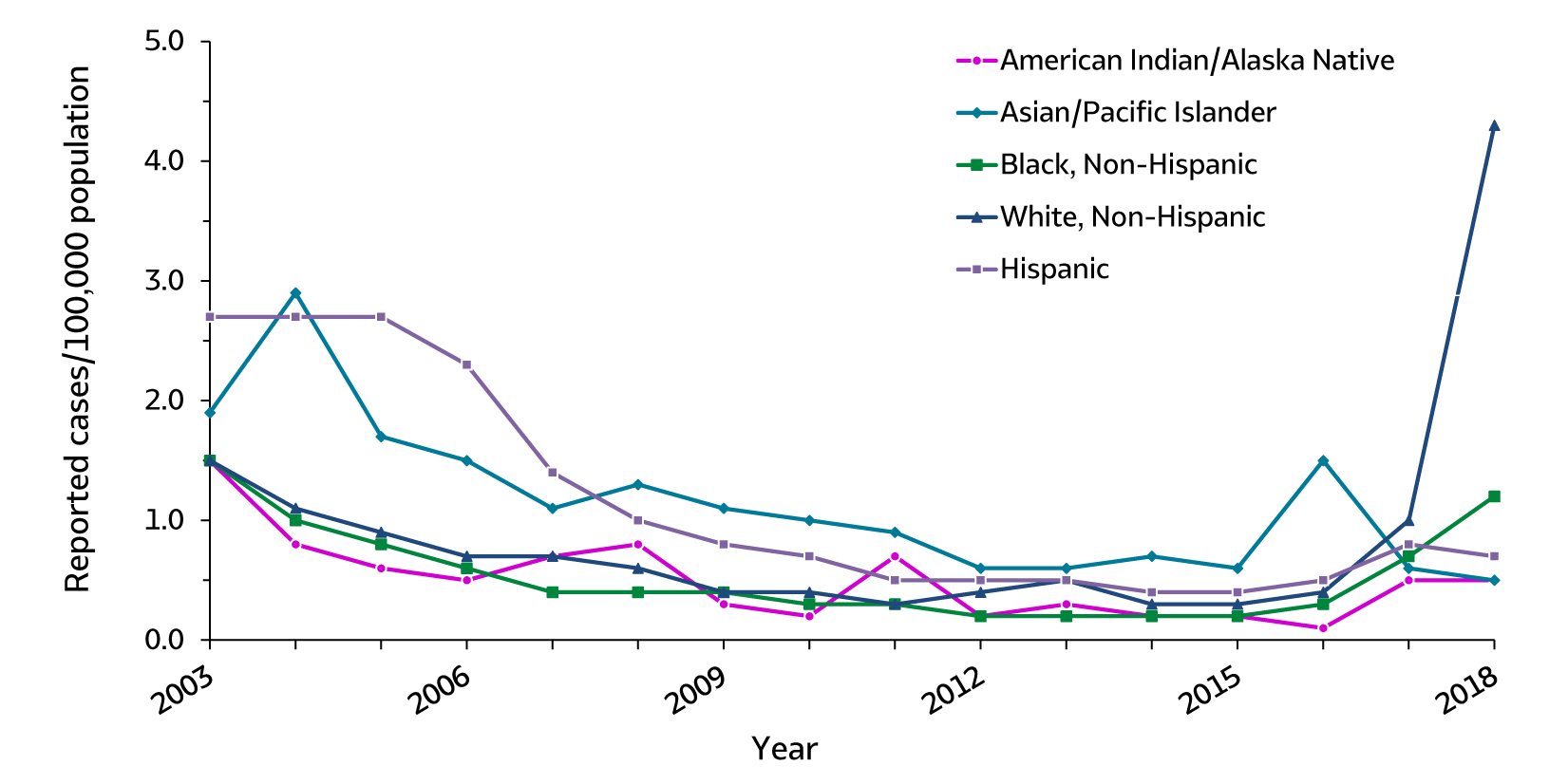 Table 1.2. Number and rate* of reported cases† of hepatitis A, by demographic characteristics — United States 2014–2018

Source: CDC, National Notifiable Diseases Surveillance System.
* Rate per 100,000 population.
† For the case definition, see https://wwwn.cdc.gov/nndss/conditions/hepatitis-a-acute/.
§ Numbers reported in each category may not add up to the total number of reported cases in a year due to cases with missing data or, in the case of race/ethnicity, cases categorized as “Other”.
¶ Health and Human Services Regions were categorized according to the grouping of states and U.S. Territories assigned under each of the ten Department of Health and Human Services regional offices (https://www.hhs.gov/about/agencies/iea/regional-offices/index.htmlexternal icon). For the purposes of this report, regions with U.S. territories (Region 2 and Region 9) contain data from states only.

HEPATITIS A – RISK BEHAVIORS AND EXPOSURES

Figure 1.7. Availability of information on risk behaviors/exposures* associated with reported cases of hepatitis A — United States, 2018 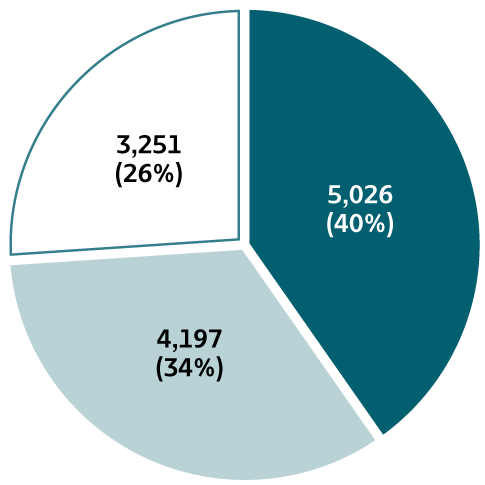 Source: CDC, Nationally Notifiable Diseases Surveillance System.
* Case reports with at least one of the following risk behaviors/ exposures reported 2–6 weeks prior to symptom onset: 1) injection drug use; 2) sexual, household, or other contact; 3) men who have sex with men; 4) travel to hepatitis A-endemic region.
† Reported cases may include more than one risk behavior/exposure.
§ Cases with more than one type of contact reported were categorized according to a hierarchy: 1) sexual contact; 2) household contact (non-sexual); and 3) other contact with hepatitis A case
¶ A total of 7,497 hepatitis A cases were reported among males in 2018.

Table 1.4. Number and rate* of deaths with hepatitis A listed as a cause of death† among U.S. residents, by demographic characteristic and year — United States, 2014–2018

Source: CDC, National Center for Health Statistics, Multiple Cause of Death 1999–2018 on CDC WONDER Online Database. Data are from the 2014–2018 Multiple Cause of Death files and are based on information from all death certificates filed in the vital records offices of the fifty states and the District of Columbia through the Vital Statistics Cooperative Program. Deaths of nonresidents (e.g., nonresident aliens, nationals living abroad, residents of Puerto Rico, Guam, the Virgin Islands, and other U.S. Territories) and fetal deaths are excluded. Numbers are slightly lower than previously reported for 2013–2016 due to NCHS standards which restrict displayed data to US residents. Accessed at http://wonder.cdc.gov/mcd-icd10.html on February 14, 2020. CDC WONDER dataset documentation and technical methods can be accessed at https://wonder.cdc.gov/wonder/help/mcd.html#.
* Rates for race/ethnicity, sex, and the overall total are age-adjusted per 100,000 U.S. standard population in 2000 using the following age group distribution (in years): <1, 1–4, 5–14, 15–24, 25–34, 35–44, 45–54, 55–64, 65–74, 75–84, and 85+. For age-adjusted death rates, the age-specific death rate is rounded to one decimal place before proceeding to the next step in the calculation of age-adjusted death rates for NCHS Multiple Cause of Death on CDC WONDER. This rounding step may affect the precision of rates calculated for small numbers of deaths. Missing data are not included.
† Cause of death is defined as one of the multiple causes of death and is based on the International Classification of Diseases, 10th Revision (ICD-10) codes B15 (hepatitis A).
UR§ Unreliable rate: Rates where death counts were less than 20 were not displayed due to the instability associated with those rates.
S¶ Suppressed: CDC WONDER did not have the functionality to calculate rates for the “Other” race/ethnicity group.