This outbreak appears to be over, but the recalled flour products have long shelf lives and may still be in people’s homes. Consumers who don’t know about the recalls could continue to eat the products and get sick. A list of the recalled products and how to identify them is available below in the Recalls and Advice to Consumers section.

Recalls and Advice to Consumers, Restaurants, and Retailers 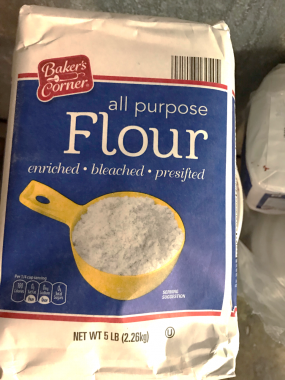 Several brands and types of flour were recalled because they may be contaminated with E. coli. Consumers should not use recalled products. The following products were recalled:

Consumers should not use any of the recalled flour. Throw it out.

Clean up thoroughly after baking.

Contact your healthcare provider if you think you may have become ill from eating raw dough.

Restaurants and other retailers should not use, sell, or serve any of the recalled flour.

Restaurants and other retailers should always be safe with raw dough.

Public health investigators used the PulseNet system to identify illnesses that may have been part of this outbreak. PulseNet is the national subtyping network of public health and food regulatory agency laboratories coordinated by CDC. DNA fingerprinting is performed on E. coli bacteria isolated from ill people by using techniques called pulsed-field gel electrophoresis (PFGE) and whole genome sequencing (WGS). CDC PulseNet manages a national database of these DNA fingerprints to identify possible outbreaks. WGS gives a more detailed DNA fingerprint than PFGE. WGS performed on bacteria isolated from ill people showed that they were closely relatedly genetically. This means that people in this outbreak were more likely to share a common source of infection.

As of July 11, 2019, a total of 21 people infected with the outbreak strain of E. coli O26 were reported from 9 states. A list of the states and the number of cases in each can be found on the Map of Reported Cases page.

Illnesses started on dates ranging from December 11, 2018 to May 21, 2019. Ill people range in age from 7 to 86 years, with a median age of 24. Seventy-one percent of ill people were female. Of 20 people with information available, 3 (15%) were hospitalized. No deaths were reported.

Epidemiologic and laboratory evidence, supported by product distribution records, indicated that flour was the likely source of this outbreak.

In interviews, ill people answered questions about the foods they ate and other exposures in the week before they became ill. Of 13 people who were asked, 6 (46%) reported eating, licking, or tasting raw, homemade dough or batter. Three people with detailed information reported eating raw dough or batter made with Baker’s Corner All-Purpose flour.

Investigators with the Rhode Island Department of Health collected records and flour samples at a bakery where an ill person reported eating raw dough. Records indicated that the bakery used Baker’s Corner All Purpose Flour from ALDI. The outbreak strain was isolated from an unopened bag of Baker’s Corner All Purpose Flour collected at the bakery.