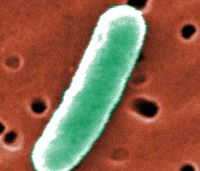 Enterotoxigenic Escherichia coli (E. coli), or ETEC, is an important cause of bacterial diarrheal illness. Infection with ETEC is the leading cause of travelers’ diarrhea and a major cause of diarrheal disease in lower-income countries, especially among children. ETEC is transmitted by food or water contaminated with animal or human feces. Infection can be prevented by avoiding or safely preparing foods and beverages that could be contaminated with the bacteria, as well as washing hands with soap frequently.

Escherichia coli is a bacterium that normally lives in the intestines of humans and other animals. Most types of E. coli are harmless, but some can cause disease. Disease-causing E. coli are grouped according to the different ways by which they cause illness. Enterotoxigenic Escherichia coli, or ETEC, is the name given to a group of E. coli that produce special toxins which stimulate the lining of the intestines causing them to secrete excessive fluid, thus producing diarrhea. The toxins and the diseases that ETEC causes are not related to E. coli O157:H7.

ETEC was first recognized as a cause of human diarrheal illness in the 1960s. It have since emerged as a major bacterial cause of diarrhea among travelers and children in the developing world. ETEC is increasingly recognized as an important cause of foodborne illness in developed nations, such as the United States.

ETEC produces two toxins, a heat-stable toxin (known as ST) and a heat-labile toxin (LT). Although different strains of ETEC can secrete either one or both of these toxins, the illness caused by each toxin is similar.

What illness does ETEC cause?

Infection with ETEC can cause profuse watery diarrhea and abdominal cramping. Fever, nausea with or without vomiting, chills, loss of appetite, headache, muscle aches and bloating can also occur but are less common. Illness develops 1-3 days after exposure and usually lasts 3-4 days. Some infections may take a week or longer to resolve. Symptoms rarely last more than 3 weeks. Most patients recover with supportive measures alone and do not require hospitalization or antibiotics.

How does someone become infected with ETEC?

Infection occurs when a person eats food, or drinks water or ice contaminated with ETEC bacteria. Human or animal wastes (e.g., feces) are the ultimate source of ETEC contamination.

How is infection with ETEC diagnosed?

In the laboratory, infection with ETEC is diagnosed when the bacteria are cultured from samples of stool. The techniques necessary to identify ETEC are not widely available, and physicians may make the diagnosis based on a patient’s history and symptoms. If ETEC is suspected, the microbiology laboratory evaluating a patient’s stool specimen should be alerted.

How is infection with ETEC treated?

Most infected persons will recover within a few days, without requiring any specific treatment.

Clear liquids are recommended for persons with diarrhea to prevent dehydration and loss of electrolytes. For adults, packaged oral rehydration salts or premixed oral rehydration solutions (both available over-the-counter) may be used, although traditional remedies with salty liquids such as chicken soup are also effective. Bismuth subsalicylate compounds (e.g., Pepto-Bismol©) can help reduce the number of bowel movements. Although antimotility agents (e.g., Imodium©, Lomotil©) can effectively relieve ETEC-associated diarrhea and cramps, they may prolong the time it takes the body to rid itself of the toxin. Antimotility medications should be avoided by persons with high fevers or bloody diarrhea, and should be discontinued if diarrhea symptoms persist more than 48 hours. There are no data showing that kaolin-pectin compounds (e.g., Kaopectate©) or lactobacillus slows diarrhea or relieves abdominal cramping.

Antibiotics can shorten the duration of diarrheal illness and discomfort, especially if given early, but they are usually not required. ETEC is frequently resistant to common antibiotics, including trimethoprim-sulfamethoxazole and ampicillin. Because resistance to antibiotics is increasing worldwide, the decision to use an antibiotic should be carefully weighed against the severity of illness and the risk of adverse reactions, such as rash, antibiotic-associated colitis, and vaginal yeast infection. Fluoroquinolones have been shown to be effective therapy.

* The use of trademarks is for identification only and does not imply an endorsement by the Public Health Service or the U.S. Department of Health and Human Services.
What are the long-term consequences of infection?

Virtually all persons recover completely without any long-term consequences.

What can be done to prevent infection with ETEC?

For travelers in developing countries, ETEC infection can be prevented by avoiding foods and beverages that could be contaminated with bacteria. Although both cooked and uncooked foods have been associated with ETEC infections, high-risk foods are raw fruits and vegetables (e.g., salads), raw seafood or undercooked meat or poultry, unpasteurized dairy products, food from street vendors, and untreated water (including ice) in areas lacking adequate chlorination.

There have been rare cases of ETEC infection reported in the United States associated with eating salads, raw fruits, and vegetables. However, these foods are generally safe if handled and prepared appropriately.

In developing countries, food can be made safe to eat by thoroughly cooking it and by keeping it hot. Fruits and vegetables should be peeled by the person eating them. Water used for drinking (including brushing teeth) or for washing food in these countries should be bottled, boiled, or chemically treated with iodine, chlorine or another disinfectant. Handwashing with soap and water also can prevent contamination of food and beverages with ETEC and prevent transmission from person to person as well. Bismuth subsalicylate preparations (1 oz of liquid or two 262.5-mg tablets taken four times daily) can reduce the risk of becoming infected with ETEC and other common bacteria that cause diarrhea. Persons with kidney disease should consult a physician before taking medications with large amounts of salicylate.

Vaccines for ETEC are being developed, but none are currently available.

Are antibiotics recommended to prevent ETEC?

Taking antibiotics to prevent ETEC infection is generally not recommended. Pregnant women and persons with weakened immune systems (such as patients who are receiving chemotherapy, who are taking immunosuppressive medications, or who have HIV infection) should talk with their health care provider if they are traveling to areas at high risk for ETEC exposure.

What is CDC doing to prevent ETEC?

CDC provides advice to travelers and travel medicine clinics about ETEC infection, and assists health care providers as well as state and county health departments with ETEC diagnosis and investigations of ETEC outbreaks. In addition, CDC, in collaboration with international agencies, works to improve sanitary conditions in foreign accommodations (e.g., tourist resorts) and on board cruise ships docking in U.S. ports. Finally, CDC is working to improve methods for diagnosing ETEC.