CDC collaborated with public health and agriculture officials in Missouri, other states, and the U.S. Food and Drug Administration (FDA) to investigate a multistate outbreak of Escherichia coli serotype O157:H7 infections linked to romaine lettuce. Public health investigators used DNA “fingerprints” of E. coli O157:H7 bacteria obtained through diagnostic testing with pulsed-field gel electrophoresis (PFGE) to identify cases of illness that may be part of this outbreak. They used data from PulseNet, the national subtyping network made up of state and local public health laboratories and federal food regulatory laboratories that performs molecular surveillance of foodborne infections.

As of March 21, 2012, 58 persons infected with the outbreak strain of E. coli O157:H7 were reported from 9 states. The number of ill persons identified in each state was as follows: Arizona (1), Arkansas (2), Illinois (9), Indiana (2), Kansas (2), Kentucky (1), Minnesota (2), Missouri (38), and Nebraska (1). Two cases were removed from the case count because advanced molecular testing determined that they were not related to this outbreak strain. Among persons for whom information was available, illnesses began from October 9, 2011 to November 7, 2011. Ill persons ranged in age from 1 to 94 years, with a median age of 28 years. Fifty-nine percent were female. Among the 49 ill persons with available information, 33 (67%) were hospitalized, and 3 developed hemolytic uremic syndrome (HUS). No deaths were reported.

The outbreak can be visually described with a chart showing the number of people who became ill each day. This chart is called an epidemic curve or epi curve. Please see the Timeline for Reporting Cases of E. coli O157 Infection for more details.

This particular outbreak appears to be over. However, E. coli O157:H7 is still an important cause of human illness in the United States. More information about E. coli O157:H7, and steps people can take to reduce their risk of infection, can be found on the CDC E. coli O157:H7 Web Page and the CDC Vital Signs Web Page.

Collaborative investigative efforts of state, local, and federal public health agencies indicated that romaine lettuce sold primarily at several locations of a single grocery store chain (Chain A) was the likely source of illnesses in this outbreak. Contamination likely occurred before the product reached grocery store Chain A locations.

The FDA and several state agencies conducted traceback investigations for romaine lettuce to try to identify the source of contamination. Traceback investigations focused on ill persons who had eaten at salad bars at several locations of grocery store Chain A and ill persons at university campuses in Minnesota (1 ill person) and Missouri (2 ill persons). Traceback analysis determined that a single common lot of romaine lettuce harvested from Farm A was used to supply the grocery store Chain A locations as well as the university campus in Minnesota during the time of the illnesses. This lot was also provided to a distributor that supplied lettuce to the university campus in Missouri, but records were not sufficient to determine if this lot was sent to this university campus. Preliminary findings of investigation at Farm A did not identify the source of the contamination. Farm A was no longer in production during the time of the investigation.

Most people infected with E. coli O157:H7 develop diarrhea (often bloody) and abdominal cramps 2-8 days (3-4 days, on average) after swallowing the organism, but some illnesses last longer and are more severe. Infection is usually diagnosed by stool sample culture. While most people recover within a week, some develop a severe infection. A type of kidney failure called hemolytic uremic syndrome (HUS) can begin as the diarrhea is improving; this condition can occur among persons of any age but is most common in children under 5 years old and the elderly. Signs and symptoms of HUS may include fever, abdominal pain, pale skin tone, fatigue and irritability, small, unexplained bruises or bleeding from the nose and mouth, decreased urination, and swelling of the face, hands, feet, or entire body. Persons who experience these symptoms and believe they are at risk for HUS should seek emergency medical care immediately.

CDC leads federal efforts to gather data on foodborne illnesses, investigate foodborne illnesses and outbreaks, and monitor the effectiveness of prevention and control efforts. CDC is not a food safety regulatory agency but works closely with the food safety regulatory agencies, in particular, with the Food and Drug Administration of the U.S. Department of Health and Human Services and the Food Safety and Inspection Service of the U.S. Department of Agriculture. CDC also plays a key role in building state and local health department epidemiology, laboratory, and environmental health capacity to support foodborne disease surveillance and outbreak response. Notably, CDC data can be used to help document the effectiveness of regulatory interventions. 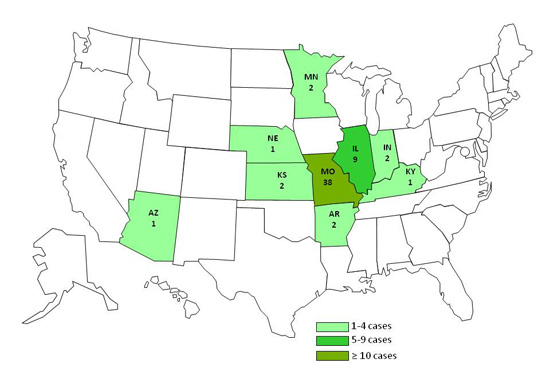 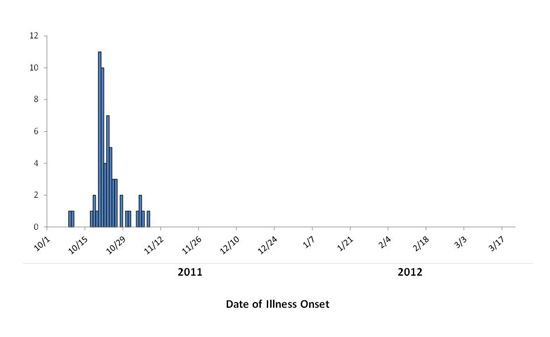