CDC is collaborating with public health officials in Arizona, California, Colorado, New Mexico, Nevada, the U.S. Department of Health and Human Services’ Food and Drug Administration (FDA), and the U.S. Department of Agriculture’s Food Safety and Inspection Service (FSIS) to investigate a multistate outbreak of human infections due to E. coli O157:H7. This is a rare strain of E. coli O157:H7 that has never been seen before in the PulseNet database. PulseNet is the national subtyping network made up of state and local public health laboratories and federal food regulatory laboratories that performs molecular surveillance of foodborne infections.

Thirty-eight persons infected with the outbreak strain of E. coli O157:H7 have been reported from five states. The number of ill persons identified in each state with this strain is as follows: AZ (19), CA (3), CO (11), NM (3) and NV (2). Dates of illness onset range from October 16, 2010 through October 27, 2010. Patients range in age from 1 to 85 years and the median age is 16 years. There have been 15 reported hospitalizations, 1 case of hemolytic uremic syndrome (HUS), and no deaths.

The outbreak can be visually described with a chart showing the number of persons who became ill each day. This chart is called an epidemic curve or epi curve. Illnesses that occurred after November 4, 2010 might not yet be reported due to the time it takes between when a person becomes ill and when the illness is reported. This takes an average of 2 to 3 weeks.

FDA worked with its state partners to investigate Bravo Farms and to identify potential sources of contamination. FDA collected product samples for testing.

Costco cooperated and assisted with this investigation.

On November 23, 2010, Bravo Farms expanded its recall to include all of its cheeses. This action follows laboratory testing by the California Department of Food and Agriculture that reveals the presence of Listeria monocytogenes and E. coli O157:H7 in cheese samples. Bravo Farms sells a variety of cheeses at retail stores throughout the US, mainly on the West coast, including Gouda, Pepper Jack, Tulare Cannonball, and several different styles and flavors of Cheddar cheese. To date, no illnesses associated with L. monocytogenes in Bravo Farm cheese have been reported. For more information, please see the FDA Press AnnouncementExternal.

Most people infected with E. coli O157:H7 develop diarrhea (often bloody) and abdominal cramps 2-8 days (3-4 days, on average) after swallowing the organism, but some illnesses last longer and are more severe. Infection is usually diagnosed by stool sample culture. While most people recover within a week, some develop a severe infection. A type of kidney failure called hemolytic uremic syndrome (HUS) can begin as the diarrhea is improving; this can occur among persons of any age but is most common in children under 5 years old and the elderly. Signs and symptoms of HUS may include: fever, abdominal pain, pale skin tone, fatigue and irritability, small, unexplained bruises or bleeding from the nose and mouth, decreased urination and swelling of the face, hands, feet, or entire body. Persons who experience these symptoms and believe they are at risk for HUS should seek emergency medical care immediately.

Consumers who have any Bravo Farms Cheeses should not eat them. Instead, they should return the cheeses to the place of purchase or dispose of them in a closed plastic bag placed in a sealed trash can. This will prevent people or animals, including wild animals, from eating it. 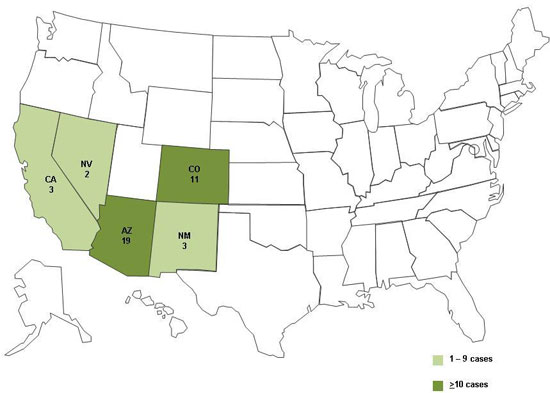