On December 11, CDC began an investigation, along with several states and the U.S. Food and Drug AdministrationExternal (FDA), into the source of the five illnesses in the United States. This investigation included reaching out to state health departments to find out what foods ill people ate before they got sick, and requesting that isolates from ill people undergo WGS so that investigators could compare the results to WGS results from ill people in Canada.

On December 20, initial WGS results showed that three isolates from ill people in the United States were closely related genetically to one isolate from an ill person in Canada. However, laboratory testing data alone are not enough to prove a link. Health officials rely on other types of data, such as interviews from ill people, to support laboratory findings. State and local public health officials worked to interview ill people to determine what they ate in the week before their illness started. As of December 20, four ill people in the U.S. outbreak had been interviewed. One of the four ill people reported possibly eating romaine lettuce in the week before their illness started. The investigation continued to determine the source of the illnesses in the United States.

As of January 25, 2018, 25 people infected with the outbreak strain of STEC O157:H7 had been reported from 15 states. A list of the states and the number of cases in each can be found on the Case Count Map page. Illnesses started on dates ranging from November 5, 2017 to December 12, 2017. Ill people ranged in age from 1 to 95 years, with a median age of 26. Among ill people, 67% were female. Nine ill people were hospitalized, including two people who developed hemolytic uremic syndrome, a type of kidney failure. One death was reported from California.

By the end of the investigation, 15 people had been interviewed about the foods they ate and other exposures in the week before illness began. Ninety-three percent of ill people reported eating any type of leafy greens. Fifty-five percent of ill people specifically reported eating romaine lettuce. This percentage was not significantly higher than results from a survey Cdc-pdf[PDF – 29 pages] of healthy people in which 46% reported eating romaine lettuce in the week before they were interviewed. No other food items linked to illness were identified.

This outbreak appears to be over. The likely source of the outbreak in the United States appears to be leafy greens, but the investigation did not identify a specific type of leafy greens as the source of the outbreak. Leafy greens typically have a short shelf life, and since the last illness started a month ago, it is likely that contaminated leafy greens linked to this outbreak are no longer available. Sometimes outbreaks end before enough information is available to identify the likely source. Officials thoroughly investigate each outbreak, and they are continually working to develop new ways to investigate and solve outbreaks faster. 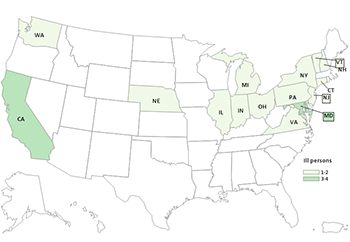 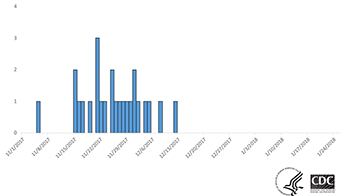