This outbreak appears to be over. Shiga toxin-producing Escherichia coli (STEC) is an important cause of illness in the United States. Find more information about steps you can take to reduce your risk of infection on the E. coli and Food Safety web page. 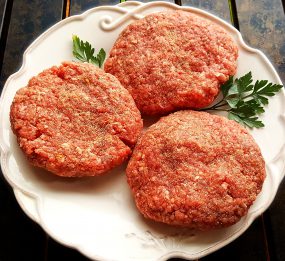 Wash hands with soap and water after touching raw ground bison. Use hot, soapy water or a bleach solution to wash items that came in contact with raw meat or its juices.

Public health investigators used the PulseNet system to identify illnesses that may have been part of this outbreak. PulseNet is the national subtyping network of public health and food regulatory agency laboratories coordinated by CDC. DNA fingerprinting is performed on E. coli bacteria isolated from ill people by using a standardized laboratory and data analysis method called whole genome sequencing (WGS). CDC PulseNet manages a national database of these sequences that are used to identify possible outbreaks. WGS gives investigators detailed information about the bacteria causing illness. In this investigation, WGS showed that bacteria isolated from ill people were closely related genetically. This means that people in this outbreak were more likely to share a common source of infection.

A total of 33 people infected with the outbreak strain of STEC O103 (8 people), STEC O121 (21 people), or both (4 people) were reported from 8 states. A list of the states and the number of cases in each can be found on the Map of Reported Cases page.

Illnesses started on dates ranging from March 18, 2019, to August 11, 2019. Ill people ranged in age from 6 to 80 years, with a median age of 27. Fifty-two percent of ill people were female. Of 31 ill people with information available, 18 hospitalizations were reported. No deaths were reported, and no cases of hemolytic uremic syndrome, a type of kidney failure, have been reported.

This investigation began on June 10, 2019, when PulseNet notified CDC of this outbreak. Epidemiologic, traceback, and laboratory evidence indicated that ground bison produced by Northfork Bison Distributions, Inc., was the likely source of this outbreak.

In interviews, ill people answered questions about the foods they ate and other exposures in the week before they became ill. Of the 23 people who were asked, 13 (57%) reported that they ate or maybe ate ground bison. Ill people ate ground bison in burgers from several different restaurants or prepared ground bison at home.

On July 16, 2019, Northfork Bison Distributions, Inc., in Saint-Leonard, Quebec, Canada, recalled ground bison and bison patties (referred to as Bison Burgers and/or Buffalo Burgers) produced between February 22, 2019, and April 30, 2019. Consumers should not eat, and restaurants and retailers should not serve or sell, recalled ground bison products.