Investigators compared the “DNA fingerprints” patterns of E. coli O157 strains found in ground beef with “DNA fingerprints” patterns of E. coli O157 strains isolated from ill persons. As of 12 PM (ET) October 26, 2007, 40 cases of E. coli O157 infection have been identified with PFGE patterns that match at least one of the patterns of E. coli strains found in Topp’s brand frozen ground beef patties. Ill persons reside in 8 states: Connecticut (2), Florida (1), Indiana (1), Maine (1), New Jersey (9), New York (13), Ohio (1), and Pennsylvania (12). Thirty-three (89%) of 37 patients with a detailed food history consumed ground beef. Seven illnesses have confirmed associations with recalled products because the strain isolated from the person was also isolated from the meat in their home. The first reported illness began on July 5, 2007, and the last began on September 24, 2007. Among thirty-three ill persons for whom hospitalization status is known, twenty-one (64%) were hospitalized. Two patients developed a type of kidney failure called hemolytic-uremic syndrome (HUS). No deaths have been reported. Eighteen (45%) patients are female. The ages of patients range from 1 to 77 years; 50% are between 15 and 24 years old (only 14% of the US population is in this age group).

Consumers who have questions about the recalled products can contact USDA-FSIS at “Ask Karen’” online at www.AskKaren.govExternal or call the Meat and Poultry Hotline at 1-888-MPHotline (674-6854). Because any raw ground beef can contain disease-causing germs, CDC and USDA-FSIS encourage consumers to use good food safety practices and to heed the following advice: 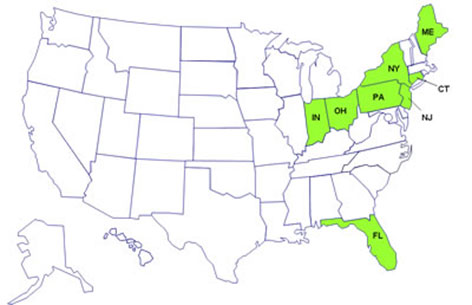