HIV and Gay and Bisexual Men

Gay, bisexual, and other men who have sex with mena are the population most affected by HIV in the United States. In 2017, adult and adolescent gay and bisexual menb made up 70% (27,000) of the 38,739 new HIV diagnosesc in the United States (US) and dependent areas.d Approximately 492,000 sexually active gay and bisexual men are at high risk for HIV; however, we have more tools to prevent HIV than ever before.

New HIV Diagnoses Among Gay and Bisexual Men in the US and Dependent Areas by Race/Ethnicity, 2017 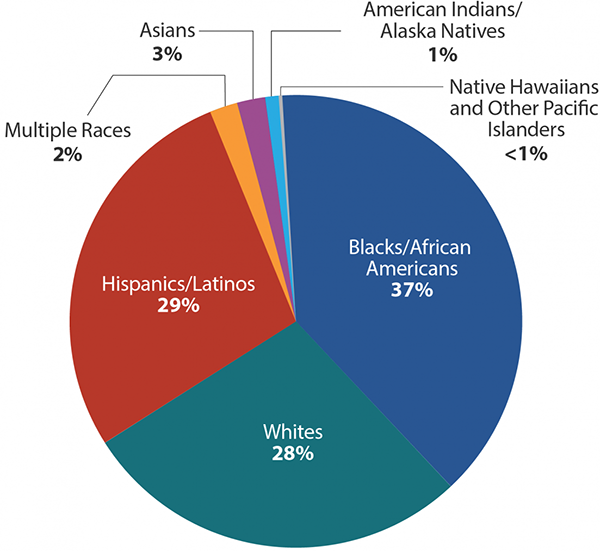 Hispanics/Latinos can be of any race.
Source: CDC. Diagnoses of HIV infection in the United States and dependent areas, 2017 pdf icon[PDF – 6 MB]. HIV Surveillance Report 2018;29.

New HIV Diagnoses Among Gay and Bisexual Men in the US and Dependent Areas by Age and Race/Ethnicity, 2017 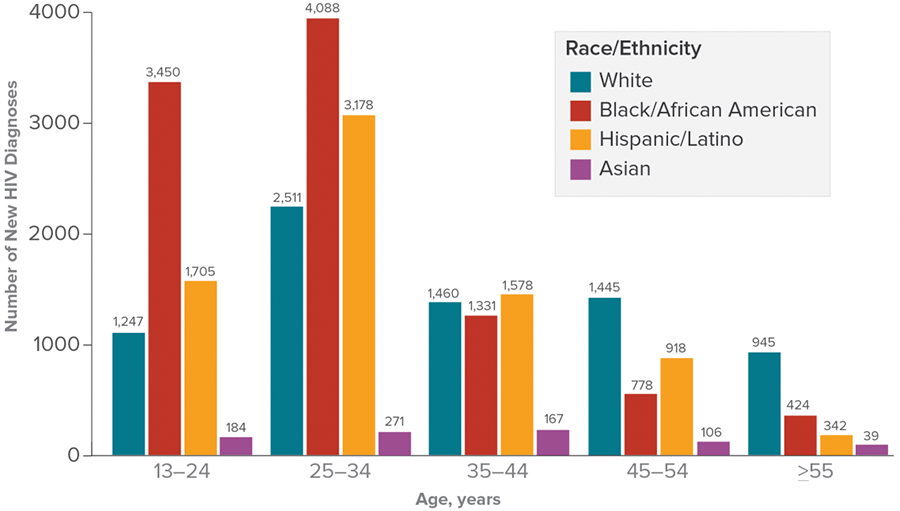 Subpopulations representing 2% or less of HIV diagnoses among gay and bisexual men are not reflected in this chart.
Source: CDC. Diagnoses of HIV infection in the United States and dependent areas, 2017 pdf icon[PDF – 6 MB]. HIV Surveillance Report 2018;29.

HIV Diagnoses Among Gay and Bisexual Men in 50 States and the District of Columbia, 2010-2016

In 2016, there were 7,905 deaths among adult and adolescent gay and bisexual men with diagnosed HIV in the US and dependent areas. These deaths may be due to any cause.

Stigma, homophobia, and discrimination affect the health and well-being of gay and bisexual men and may prevent them from seeking and receiving high-quality health services, including HIV testing, treatment, and other prevention services. These issues place gay and bisexual men at higher risk for HIV.

1 in 6 gay and bisexual men with HIV are unaware they have it. People who don’t know they have HIV cannot get the medicine they need to stay healthy and prevent transmitting HIV to their partners. Therefore, they may transmit the infection to others without knowing it.

Gay and bisexual men are also at increased risk for other sexually transmitted diseases (STDs), like syphilis, gonorrhea, and chlamydia. Having another STD can greatly increase the chance of getting or transmitting HIV. Condoms can protect from some STDs, including HIV.

Socioeconomic factors such as limited access to quality health care, lower income and educational levels, and higher rates of unemployment and incarceration may place some gay and bisexual men at higher risk for HIV.

CDC and its partners are pursuing a high-impact prevention approach to maximize the effectiveness of current HIV prevention interventions and strategies among gay and bisexual men. Funding state, territorial, and local health departments is CDC’s largest investment in HIV prevention.

To learn more about a range of health issues affecting gay and bisexual men, visit the CDC Gay and Bisexual Men’s Health site.

a The term male-to-male sexual contact is used in CDC surveillance systems. It indicates a behavior that transmits HIV infection, not how individuals self-identify in terms of their sexuality. This fact sheet uses the term gay and bisexual men.
b Includes infections attributed to male-to-male sexual contact and injection drug use (men who reported both risk factors).
c HIV diagnoses refers to the number of people who received an HIV diagnosis during a given time period, not when the people got HIV infection.
d Unless otherwise noted, the term United States (US) includes the 50 states, the District of Columbia, and the 6 dependent areas of American Samoa, Guam, the Northern Mariana Islands, Puerto Rico, the Republic of Palau, and the US Virgin Islands.