New HIV Diagnoses Among Black/African American People in the US and Dependent Areas by Transmission Category and Sex, 2018* 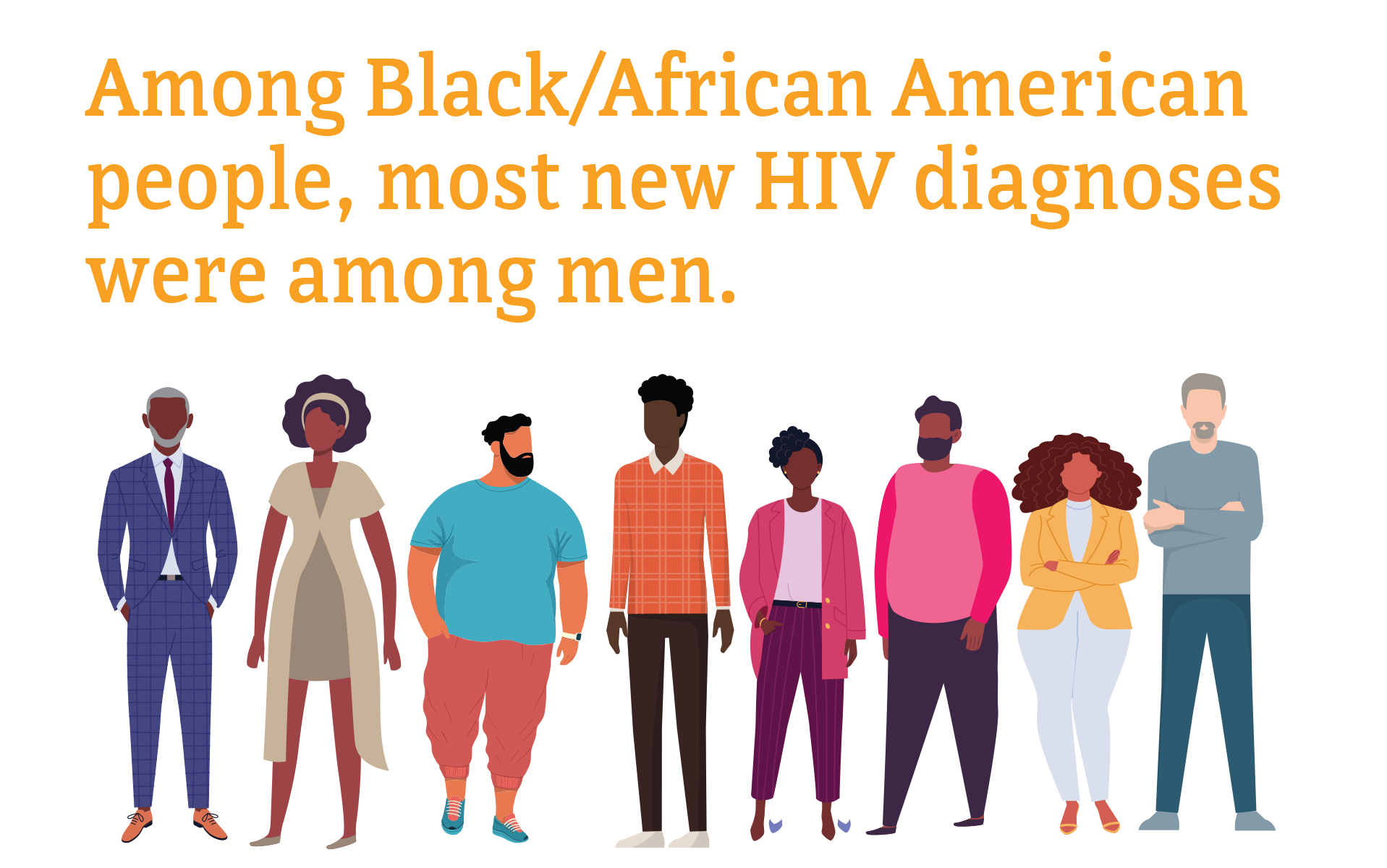 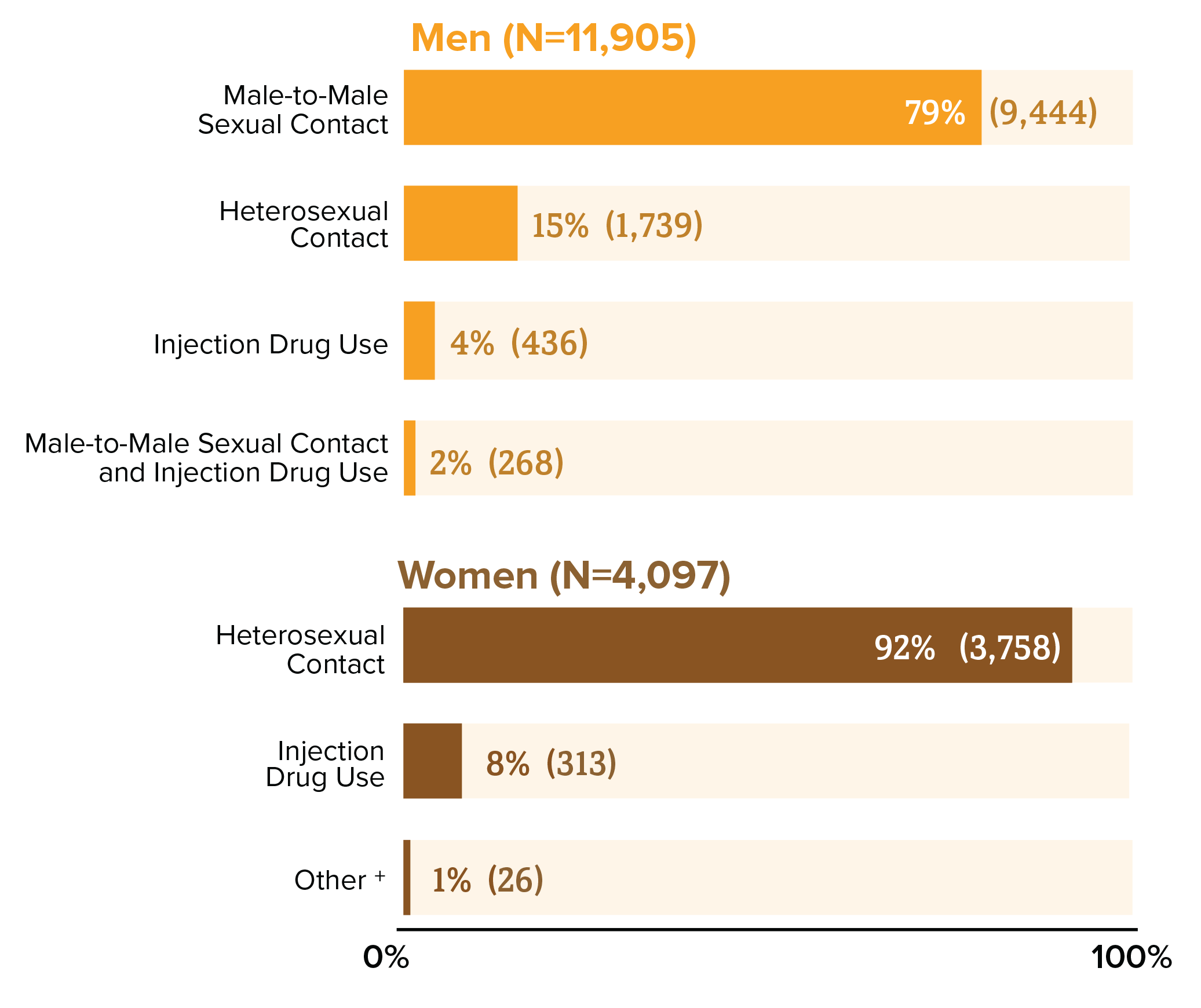 Totals may not equal 100% due to rounding.
* Based on sex assigned at birth and includes transgender people.
† Includes perinatal exposure, blood transfusion, hemophilia, and risk factors not reported or not identified.
Source: CDC. Diagnoses of HIV infection in the United States and dependent areas, 2018 (updated). HIV Surveillance Report 2020;31.

New HIV Diagnoses Among the Most-Affected Populations in the US and Dependent Areas, 2018

Subpopulations representing 2% or less of all people who received an HIV diagnosis in 2018 are not represented in this chart.
*Hispanic/Latino people can be of any race.
Source: CDC. Diagnoses of HIV infection in the United States and dependent areas, 2018 (updated). HIV Surveillance Report 2020;31.

HIV Diagnoses Among Black/African American People in the US and Dependent Areas, 2014-2018 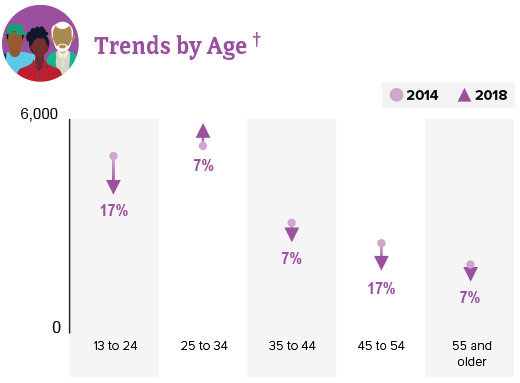 * Based on sex assigned at birth and includes transgender people.
† Does not include perinatal and other transmission categories.
Source: CDC. Diagnoses of HIV infection in the United States and dependent areas, 2018 (updated). HIV Surveillance Report 2020;31.

Black/African American People With HIV in the US, 2018

It is important for Black/African American people to know their HIV status so they can take medicine to treat HIV if they have the virus. Taking HIV medicine every day can make the viral load undetectable. People who get and keep an undetectable viral load (or remain virally suppressed) can stay healthy for many years and have effectively no risk of transmitting HIV to their sex partners.

In 2018, there were 6,678 deaths among Black/African American people with diagnosed HIV in the US and dependent areas. These deaths could be from any cause.

Some African American people with HIV are unaware they have it. People who don’t know they have HIV can’t get the care and treatment they need and may transmit HIV to others without knowing it.

HIV stigma is common among people with HIV and negatively affects their quality of life. Stigma and fear of discrimination may prevent African American people with HIV from getting the care they need or disclosing their status.

Racism and discrimination and mistrust in the health care system may influence whether African American people seek or receive HIV prevention services. These issues may also reduce the likelihood of engaging in HIV treatment and care.

African American men and women have higher rates of some sexually transmitted diseases (STDs) than other racial/ethnic communities. Having another STD can increase a person’s chance of getting or transmitting HIV.

African American people experiencing poverty may find it harder to get HIV prevention and care services. The social and economic issues associated with poverty—including limited access to high-quality health care, housing, and HIV prevention education—directly and indirectly increase the risk for HIV and affect the health of people with and at risk for HIV. These factors may explain why African American people have worse outcomes on the continuum of HIV care, including lower rates of viral suppression.

CDC is pursuing a high-impact HIV prevention approach to maximize the effectiveness of HIV prevention interventions and strategies. Funding state, territorial, and local health departments and community-based organizations (CBOs) to develop and implement tailored programs is CDC’s largest investment in HIV prevention. This includes longstanding successful programs and new efforts funded through the Ending the HIV Epidemic in the U.S. initiative. In addition to funding health departments and CBOs, CDC is also strengthening the HIV prevention workforce and developing HIV communication resources for consumers and health care providers.

a Adult and adolescent Black/African American people aged 13 and older.
b HIV diagnoses refers to the number of people who received an HIV diagnosis during a given time period, not when the people got HIV infection.
c Black refers to people having origins in any of the Black racial groups of Africa. African American is a term often used for people of African descent with ancestry in North America. This web content uses African American, unless referencing surveillance data.
d The US Census Bureau’s population estimates include the 50 states, the District of Columbia, and Puerto Rico.
e Includes the 6 dependent areas of American Samoa, Guam, the Northern Mariana Islands, Puerto Rico, the Republic of Palau, and the US Virgin Islands.