Data for 2020 should be interpreted with caution due to the impact of the COVID-19 pandemic on access to HIV testing, care-related services, and case surveillance activities in state and local jurisdictions. While 2020 data on HIV diagnoses and prevention and care outcomes are available, we are not updating this web content with data from these reports.

New HIV Diagnoses Among Men in the US and Dependent Areas by Transmission Category, 2018*

*Based on sex at birth and includes transgender people.
† Includes hemophilia, blood transfusion, perinatal exposure, and risk factors not reported or not identified.
Source: CDC. Diagnoses of HIV infection in the United States and dependent areas, 2018 (updated). HIV Surveillance Report 2020;31.

New HIV Diagnoses Among Men in the US and Dependent Areas by Race/Ethnicity, 2018* 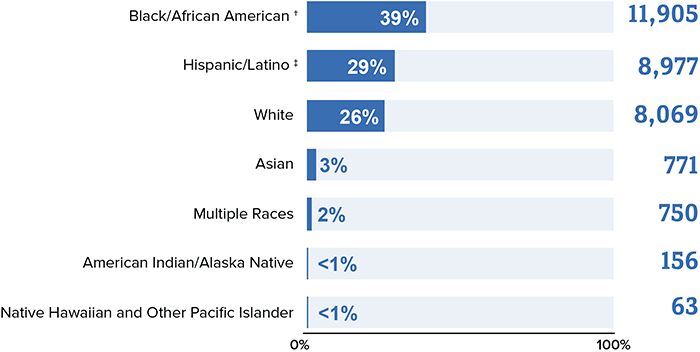 *Based on sex at birth and includes transgender people.
†Black refers to people having origins in any of the Black racial groups of Africa. African American is a term often used for Americans of African descent with ancestry in North America.
‡Hispanics/Latinos can be of any race.
Source: CDC. Diagnoses of HIV infection in the United States and dependent areas, 2018 (updated). HIV Surveillance Report 2020;31.

From 2014 to 2018, HIV diagnoses decreased 7% among men overall. But trends varied for different groups of men. 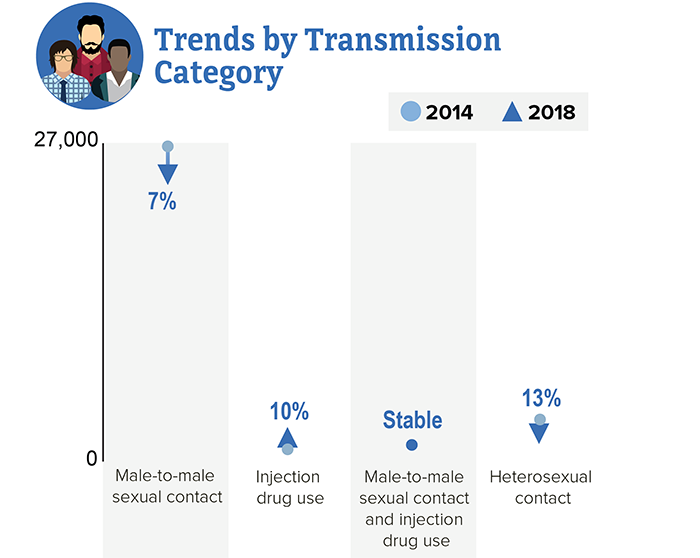 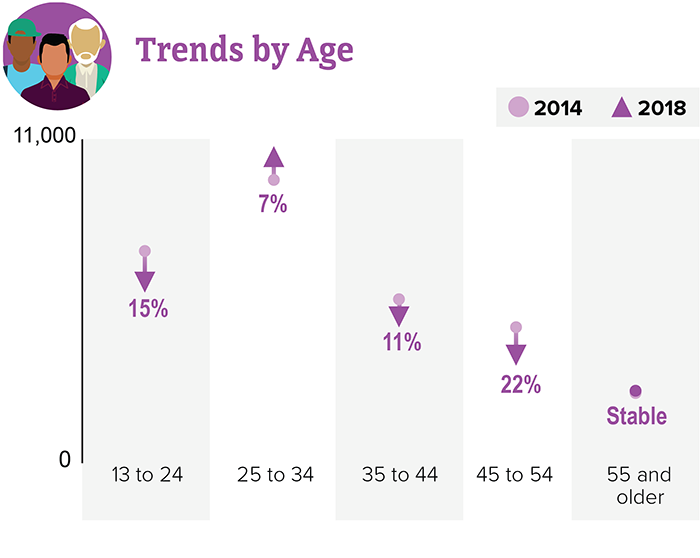 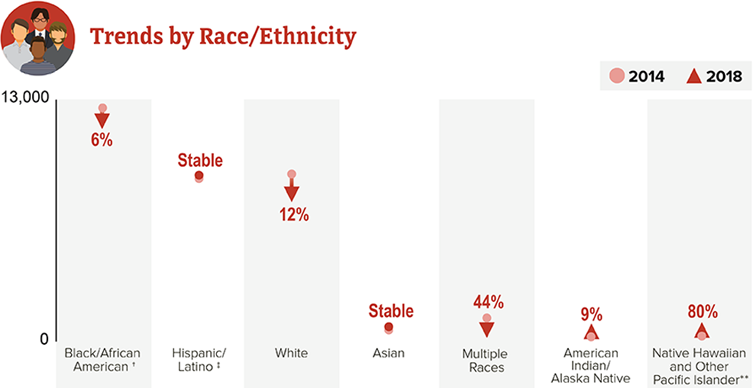 *Based on sex at birth and includes transgender people.
†Black refers to people having origins in any of the Black racial groups of Africa. African American is a term often used for Americans of African descent with ancestry in North America.
‡Hispanics/Latinos can be of any race.
**Changes in subpopulations with fewer HIV diagnoses can lead to a large percentage increase or decrease.
Source: CDC. Diagnoses of HIV infection in the United States and dependent areas, 2018 (updated). HIV Surveillance Report 2020;31.

It is important for men to know their HIV status so they can take medicine to treat HIV if they have the virus. Taking HIV medicine every day can make the viral load undetectable. People who get and keep an undetectable viral load (or stay virally suppressed) can live a long and healthy life. They also will not transmit HIV to their sex partners. 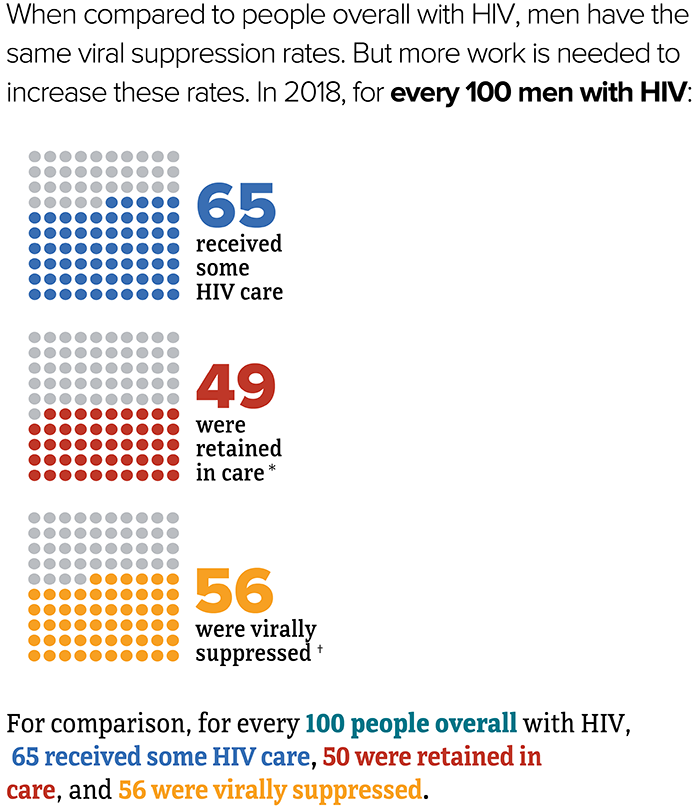 In 2018, there were 11,975 deaths among men with diagnosed HIV in the US and dependent areas. These deaths could be from any cause.

Nearly 1 in 7 men with HIV are unaware they have it.  People who do not know they have HIV cannot get the medicine they need to stay healthy and prevent transmitting HIV to their partners. Therefore, they may transmit HIV to others without knowing it.

High rates of sexually transmitted diseases (STDs). In 2018, rates of syphilis and gonorrhea were higher among men compared to women. Having other STDs can greatly increase the likelihood of getting or transmitting HIV. Using condoms the right way every time you have sex can protect from some STDs, including HIV.

Injection drug use. Sharing needles, syringes, and other injection drug equipment (for example, cookers) puts people at risk for getting or transmitting HIV. In 2018, men accounted for 73% (2,806) of the 3,864 HIV diagnoses attributed to injection drug usef in the US and dependent areas. People who exchange sex for money or drugs may be at an increased risk for HIV. According to a 2018 National HIV Behavior Surveillance Special Report, [PDF – 317 KB] 23% of men received or gave money or drugs in exchange for sex.

CDC is pursuing a high-impact HIV prevention approach to maximize the effectiveness of current HIV prevention interventions and strategies. Funding state, territorial, and local health departments and community-based organizations (CBOs) to develop and implement tailored programs is CDC’s largest investment in HIV prevention. This includes longstanding successful programs and new efforts funded through the Ending the HIV Epidemic in the U.S. initiative. In addition to funding health departments and CBOs, CDC is also strengthening the HIV prevention workforce and developing HIV communication resources for consumers and health care providers.

a Adult and adolescent men aged 13 and older.
b Based on sex at birth and includes transgender people.
c HIV diagnoses refers to the number of people who received an HIV diagnosis during a given time period, not when the people got HIV infection.
d Unless otherwise noted, the term United States (US) includes the 50 states, the District of Columbia, and the 6 dependent areas of American Samoa, Guam, the Northern Mariana Islands, Puerto Rico, the Republic of Palau, and the US Virgin Islands.
e The term male-to-male sexual contact is used in CDC surveillance systems. It indicates a behavior that transmits HIV infection, not how individuals self-identify in terms of their sexuality. This fact sheet uses the term gay and bisexual men.
f Includes infections attributed to male-to-male sexual contact and injection drug use (men who reported both risk factors).