This outbreak appears to be over. CDC is no longer advising that people avoid romaine lettuce from the Salinas Valley growing region in California. E. coli is an important cause of illness in the United States. More information about E. coli, and steps people can take to reduce their risk of infection, can be found on the E. coli and Food Safety web page. 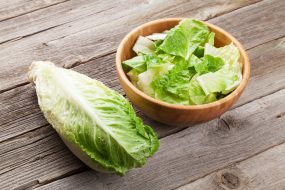 Follow these steps to help keep you healthy and make your fruits and vegetables safer to eat:

Take action if you have symptoms of an E. coli infection.

Public health investigators used the PulseNet system to identify illnesses that may be part of this outbreak. PulseNet is the national subtyping network of public health and food regulatory agency laboratories coordinated by CDC. DNA fingerprinting is performed on E. coli bacteria isolated from ill people by using a standardized laboratory and data analysis method called whole genome sequencing (WGS). CDC PulseNet manages a national database of these sequences that are used to identify possible outbreaks. WGS gives investigators detailed information about the bacteria causing illness. In this investigation, WGS showed that bacteria isolated from ill people were closely related genetically. This means that people in this outbreak were more likely to share a common source of infection. WGS also showed that this outbreak was caused by the same strain of E. coli O157:H7 that caused outbreaks linked to leafy greens in 2017 and to romaine lettuce in 2018.

A total of 167 people infected with the outbreak strain of E. coli O157:H7 were reported from 27 states. A list of the states and the number of cases in each can be found on the Map of Reported Cases page. The Public Health Agency of Canadaexternal icon also reported several illnesses that were closely related genetically to illnesses in the United States.

Illnesses started on dates ranging from September 20, 2019, to December 21, 2019. Ill people ranged in age from less than 1 to 89 years, with a median age of 27. Sixty-four percent of ill people were female. Of 165 ill people with information available, 85 (52%) hospitalizations were reported, including 15 people who developed hemolytic uremic syndrome (HUS), a type of kidney failure. No deaths were reported.

WGS analysis of bacterial isolates from 159 ill people did not predict antibiotic resistance in 157 of the isolates, but predicted resistance in 2 isolates. One isolate contained a resistance gene for ampicillin, and a second isolate contained resistance genes for ampicillin, chloramphenicol, streptomycin, sulfisoxazole, and tetracycline. WGS analysis of five bacterial isolates from a lettuce sample did not predict antimicrobial resistance. Standard antibiotic resistance testing of clinical isolates by CDC’s National Antimicrobial Resistance Monitoring System (NARMS) laboratory is currently underway. These findings do not affect treatment guidance since antibiotics are not recommended for patients with E. coli O157 infections.

Epidemiologic, laboratory, and traceback evidence indicated that romaine lettuce from the Salinas Valley growing region in California was the likely source of this outbreak.

FDA and states traced the source of some of the romaine lettuce eaten by ill people. Information gathered indicated that the romaine lettuce of interest was harvested from the Salinas Valley growing region in California. For more information about the traceback investigation, visit the FDA websiteexternal icon.

Contaminated romaine lettuce from the Salinas Valley growing region in California is no longer available for sale. As of January 15, 2020, this outbreak appears to be over.