During the webinar, CDC staff addressed questions and comments from partners, stakeholders and other interested parties. Comments and feedback made during the webinar will be considered prior to finalizing the updated STI Treatment Guidelines for publication.

This webinar provided an overview of the K8 ELC supplement, which is part of the larger Epidemiology and Laboratory Capacity for Infectious Diseases Funding Opportunity Announcement (FOA)external icon. The webinar focused on building epidemiologic, surveillance, and laboratory capacity to rapidly detect and respond to reduced-susceptibility and resistant gonorrhea and described Strategies and Activities specific to this FOA.

Participants also learned about CDC’s framework for these ideas, and will better understand how they relate to – yet are distinct from – other Division funding opportunities such as the Gonococcal Isolate Surveillance Project (GISP) and the STD Surveillance Network (SSuN).

Representatives from CDC’s Division of STD Prevention (DSTDP) responded to questions about the required and optional Activities that make up this epidemiologic, surveillance, and laboratory capacity-building FOA.

Steve Beagle, Field Coordinator for the North Carolina Department of Health and Human Services,  presented a visual account of the evolution of partner services in North Carolina to reach previously untraceable clients, from email and web sites to text messaging and smart phone apps. 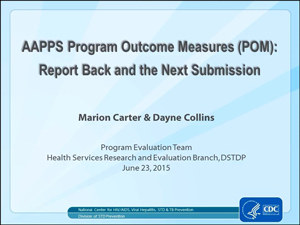 DSTDP Evaluation Team members Marion Carter and Dayne Collins presented the “Report-Back and Update on the STD AAPPS Program Outcome Measures (POM)” Webinar on June 23.  This two-part webinar included a presentation of findings from the March 2015 POM submissions, where presenters summarized statistics and comparisons across project areas and described plans for further dissemination. For the second part of the webinar, DSTDP staff outlined guidance and rationale for the upcoming August 2015 POM submission, including changes to existing POM as well as new POM.

NBS provides reporting jurisdictions with a NEDSS-compatible information system to facilitate transferring health, laboratory, and clinical data efficiently and securely over the Internet. The demo focused on case management and other STD-specific features of the NBS. Staff from CDC’s Division of Health Informatics and Surveillance answered questions about the NBS STD Module development and implementation.

Reducing the Burden of HPV-associated Cancer and Disease through Vaccination in the US – CDC Public Health Grand Rounds – February 19, 2013 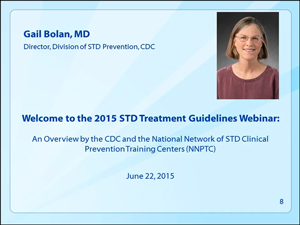 The STD Treatment Guidelines were developed through a rigorous peer-review process to assist clinicians and healthcare providers in giving their patients the appropriate STD testing, treatment, and counseling messages.  The 2015 STD Treatment Guidelines were released in June, and included updated testing, treatment, and diagnosis recommendations. Please join this webinar hosted by the U.S. Centers for Disease Control and Prevention’s Division of STD Prevention and the National Network of STD/HIV Prevention Training Centers to learn about these key changes.

Continuing education credits are available for this webinar.  At the conclusion of the session, the participant will be able to accomplish the following:

The CE credits offered are:

Questions & Answers from the webinar

STD AAPPS awardees submitted their first set of program outcome measures to DSTDP in September 2014, covering the first 6 months of the award. Since then, the measures and initial results have been under review and minor and major changes are being planned for those measures. In this webinar, CDC staff shared highlights from that data submission. CDC staff also described the proposed changes, the rationale for changes, and what will be requested for March 2015 and beyond. CDC staff described the administrative requirements related to support for clinical preventive services under STD AAPPS, which CDC will request for March.

Those who attended the 2014 grantees meeting identified Partner Services as a priority intervention. As follow-up to this feedback, in this webinar Dr. Hogben will described a framework to assess partner services in STD control in 2014 – 2019.  He also presented an overview of the pertinent literature and a data snapshot from current programs to characterize the process and outcome indicators of some partner services programs.

Following the presentation there was a discussion about possible approaches to improving Partner Services.

CDC’s Division of STD Prevention hosted a webinar on July 8, 2014 about the new supplemental funding opportunity announcement (FOA) to STD AAPPS. This supplement will support enhanced program evaluation in a limited number of project areas over the next few years. Eligibility is limited to current awardees of STD AAPPS. This supplemental FOA focuses on evaluation of one or more of the following program strategies:  1) Use of assessment data for program decision-making, 2) Increasing CT screening in primary care settings, 3) Use of DIS for HIV-related outcomes, and 4) DIS contributions towards STD prevention more generally.

CDC’s Division of STD Prevention (DSTDP), in collaboration with the National Coalition of STD Directors (NCSD) and various project areas, have been developing program outcome measures for STD AAPPS. DSTDP staff described changes made to the measures in response to feedback and presented the latest set for 2014.

The presenters described the difference between policy and lobbying, introduce policy activities and deliverables under AAPPS, and provided examples of activities from state and local programs. The presenters also characterized the fundamentals of federal, state, and local lawmaking and provided an overview of state statutes concerning the prevention of sexually transmitted diseases.

Participants learned about recommended practices for performing STD Service GAP analysis. Representatives from DSTDP commented on how the presentation’s content applies to the work that will be performed by the Division and its partners.

DSTDP leadership and staff described STD AAPPS awardee requirements in the first year of that award. They also provided an update on national outcome measures for AAPPS.

Participants will learn about proposed guidance for the Awardee Evaluation Plans. Representatives from DSTDP commented on how the presentation’s content applies to the work that will be performed by the Division and its partners.

Integration of molecular epidemiology with behavioral surveillance to identify HIV and HCV epidemic drivers in at risk populations: Lessons learned from Pakistan and Ukraine – September 7, 2017, by Paul Sandstrom, PhD,

The presentation focused on the use of bioinformatics tools to resolve HIV and HCV transmission dynamics in at risk populations in Pakistan and Ukraine. Specifically the identification of a previously underappreciated HIV epidemic amongst young women engaging in transactional sex work in Eastern Europe, as well hidden epidemic drivers in at risk populations (people who inject drugs and sex workers) in Pakistan.

There is a complex and persistent syphilis epidemic affecting gay, bisexual and other men who have sex with men (gbMSM) in every major urban centre across North America. Dr. Gesink described an initial exploration into the geography of sex, a necessary, yet understudied, aspect of STI transmission.

Dr. Aron Janssen described what we do and do not know about the mental health and medical needs of this population, and the structural barriers that make access to appropriate care difficult

Dr. John Schneider  described syphilis networks of the most at-risk populations in the United States and in particular, younger Black men who have sex with men. He presented comparisons of these networks with HIV networks and the implications of co-infection. Dr. Schneider contextualized both networks within the era of PrEP and described ongoing and novel network interventions to limit the impact of ongoing domestic syphilis epidemics.

A Journey through Syphilis: How does Treponema pallidum cause such a complex disease? – June 2, 2016 by Sheila Lukehart, PhD

Syphilis is a disease that comes and goes, with manifestations affecting many different organ systems. The clinical course is the result of interactions between the host’s immune response and the bacterium’s ability to overcome or evade that response, a duel that can last a lifetime. This presentation focused on our evolving understanding of these host and bacterial mechanisms, and their implications for syphilis control.

STDs, the Genital Microbiome and HIV Transmission: What is Happening Down There? – March 10, 2016 by Rupert Kaul, MD, PhD

Antiretroviral therapy (ART) dramatically reduces HIV transmission when used as treatment or as PrEP, but the global rate of new HIV infections currently outstrips our ability to provide ART. Most of these new HIV infections are acquired through sex, when the mucosal lining of the vagina, penis or rectum is exposed to HIV-infected genital fluids. Sexual HIV transmission is surprisingly inefficient, with a per-contact risk under 1% for most exposures. This presentation  focused on how this risk is dependent on the dynamic interaction between our immune system and microbes—both HIV, other STIs and the larger microbiome—at the mucosal surfaces of the genital tract and gut, and highlighted some challenges of translating these research findings into new HIV prevention strategies.

Sexual and gender minority patients have experienced sexual health disparities that are partially related to behaviors (e.g. frequent partner change among some subgroups), biology (e.g. increased susceptibility of the rectal mucosa to HIV and several other STIs), and structural factors (e.g. lack of culturally competent care, unsupportive socio-political environments). The advent of highly active antiretroviral therapy (HAART) and pre-exposure prophylaxis (PrEP) means that individuals can engage in condomless sex without HIV transmission. The implications of the new findings in HIV prevention for STI management and control were explored in this talk, with suggestions for the development of new paradigms to enhance the sexual health of these populations.

Risks and Resiliencies: HIV and STIs among Gay Men, other Men who have Sex with Men and Transgender Women Globally – September 3, 2015 by Stefan Baral, MD, MPH, FRCPC

The STD Prevention Science Series presented the results of recent systematic reviews of the burden of HIV and STIs among gay men, other men who have sex with men, and transgender women in both high and low and middle income settings. The webinar also included a discussion about the vulnerabilities that lead to adverse health outcomes among these populations.

Public Health in a Hostile Environment: Racial Inequality and STD/HIV in the US – June 4, 2015 by Adaora Adimora, MD, MPH 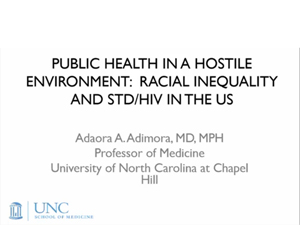 It’s now well understood that social factors are a major determinant of HIV and other STDs. But how can we develop relevant interventions? And what are the methodological challenges of social determinants research? This talk explored how these issues can impact STD epidemiologic research among African-Americans.

Since the time HIV was discovered as the cause of AIDS, we have known that a wide variety of STDs amplify transmission of the virus. The biological forces that create such risk are increasingly well understood. The greatest challenge has been to design strategies that link detection and treatment of STDs to reduced transmission of HIV.

From Partner Services to Field Services: The Evolving Role of Public Health Outreach to Control HIV/STDs – March 13, 2014, by Matthew Golden, MD
Dr. Golden spoke about the evolving role of public health out¬reach in HIV/STD. Partner services have been a component of public health STD control since the 1940s, but were not initially widely employed to combat the HIV epidemic and were never adequately funded to meaningfully affect rates of chlamydial infection. The advent of expedited partner therapy for gonorrhea and chlamydial infection, a new national emphasis on the HIV care continuum, and HIV/STD program integration are now fundamentally altering the role of disease investigation and outreach in the control of HIV/STD, both in the U.S. and in low income nations.

The Microbiome of the Penis in Adolescent Men – March 7, 2013
with J. Dennis Fortenberry, MD, MS

The Road From Observation to Intervention to Implementation: Perspectives of a Pragmatic HIV Prevention Researcher – December 13, 2012
with Connie Celum, MD, MPH