The Gonococcal Isolate Surveillance Project (GISP) was established in 1986 to monitor trends in antimicrobial susceptibilities of N. gonorrhoeae strains in the United States in order to establish an evidence-based rationale for selection of gonococcal therapies. GISP is a sentinel surveillance system based on a collaboration between participating STD clinics and their state or local public health authorities, regional laboratories, and CDC.

N. gonorrhoeae isolates are collected monthly from up to the first 25 men with symptomatic gonococcal urethritis seeking care at participating STD clinics. Clinical and demographic data are abstracted from medical records. Isolates are shipped from participating clinics to he regional laboratories participating in the Antibiotic Resistance Laboratory Network (ARLN) for agar dilution antimicrobial susceptibility testing. In 2020, isolates were tested to determine minimum inhibitory concentrations (MICs) of penicillin, tetracycline, ceftriaxone, cefixime, ciprofloxacin, azithromycin, and gentamicin. Cefixime susceptibility testing was discontinued in 2007 and re-started in 2009. Gentamicin susceptibility testing was first started in 2015. Clinical, demographic, and laboratory data are compiled and analyzed at CDC for public use.

In 2017, GISP expanded in a subset of clinical sites to conduct N. gonorrhoeae surveillance in non-urethral isolates (i.e., pharyngeal, rectal, and endocervical isolates). The Enhanced Gonococcal Isolate Surveillance Program (eGISP) was established to help understand if the pharynx and/or rectum may be anatomic niches that select for or foster resistance and to evaluate if gonococcal susceptibility patterns vary between men and women.

N. gonorrhoeae isolates are collected monthly in eGISP from up to the first 25 men or women with gonococcal infections at the pharynx or rectum and from up to the first 25 women with cervical or vaginal gonococcal infections seeking care at participating STD clinics. The submission of isolates, susceptibility testing by agar dilution, and the transmission of clinical, demographic, and laboratory data are the same as in GISP.

GISP continues to be the core antimicrobial-resistant gonococcal surveillance system in the US. Findings from GISP have directly contributed to the CDC’s STD Treatment Guidelines released in 1993, 1998, 2002, 2006, 2010, 2015, and 2021 and the Gonorrhea Treatment recommendation updates released in 2000, 2004, 2007, 2012, and 2020. Findings from GISP have also directly contributed to CDC’s AR Threats Reports in 2013 and 2019. Expanding GISP supports the ability to detect changes in susceptibility patterns across different populations and to detect resistant infections sooner for improved surveillance and public health response.

Additional information on GISP and links to recent publications can be found on the GISP website.

The majority of these criteria are consistent with Clinical and Laboratory Standards Institute (CLSI) criteria.

* As of December 2020, the CLSI criteria for resistance to ceftriaxone, cefixime, gentamicin, and azithromycin and for susceptibility to gentamicin have not been established for N. gonorrhoeae.

Impact of COVID-19 on GISP Data

Coronavirus disease 2019 (COVID-19) significantly disrupted in-person STD health services. Many clinics collecting Neisseria gonorrhoeae isolates as part of GISP and eGISP experienced temporary closures or prioritized other health services. Although some clinics were able to conduct GISP and eGISP activities throughout 2020, many clinics were only able to collect gonococcal isolates for part of the year, with an average clinic participation of 9 months. As a result, there was a 32% decrease in the number of gonococcal isolates collected in GISP compared to 2019. The COVID-19 pandemic has introduced uncertainty and difficulty in interpreting GISP and eGISP data collected during 2020. Trends presented in this report should be interpreted cautiously. As the pandemic continues, the ability to obtain an accurate picture of antimicrobial resistant gonorrhea surveillance in the U.S. may be impaired beyond 2020.

STD clinics affiliated with 33 state or city health departments contributed 3,741 gonococcal isolates to GISP in 2020. Of these 33 sites, 10 current sites have participated continuously since 1987. 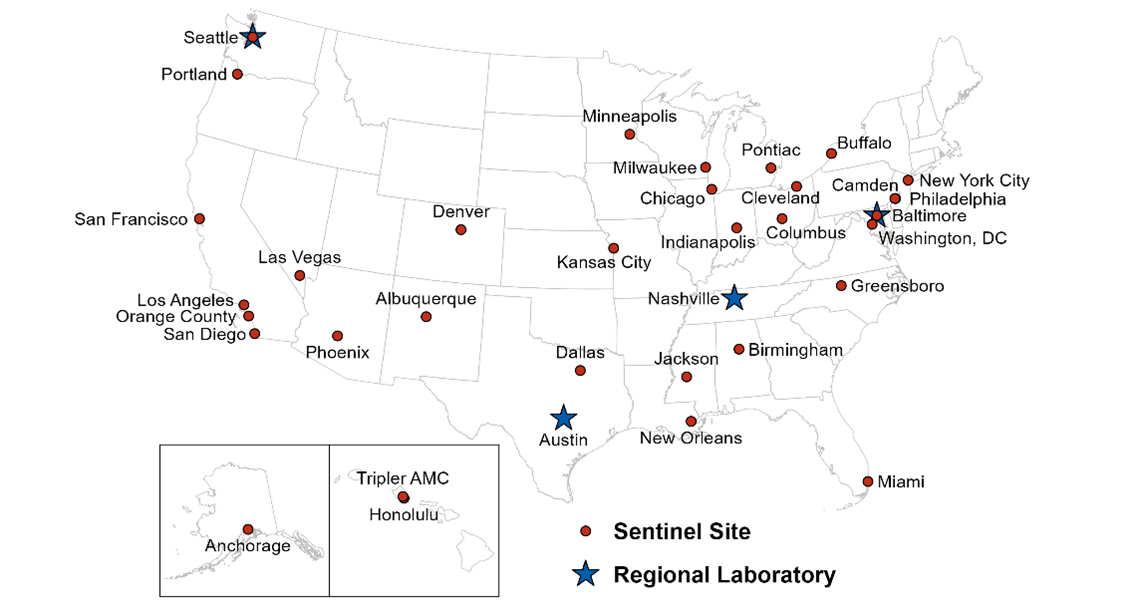 Starting in 2017, four of the seven ARLN state public health laboratories began functioning as GISP Regional Laboratories. In 2020, antimicrobial susceptibility testing of all GISP and eGISP isolates was conducted by these four laboratories:

Susceptibility testing for cefixime began in 1992, was discontinued in GISP in 2007, and was re-started in 2009. The distribution of cefixime MICs each year during 2016–2020 is displayed in Figure 1 and Table 1. Each year, approximately 90% of isolates exhibited cefixime MICs ≤0.03 µg/ml. The percentage of isolates with elevated cefixime MICs (≥0.25 µg/ml) fluctuated around 0.3% between 2016 and 2020. Site-specific data are presented in the Site Profiles section of this report.

Susceptibility testing for ceftriaxone began in 1987. The distribution of ceftriaxone MICs each year during 2016–2020 is displayed in Figure 2 and Table 2. Each year, approximately 90% of isolates exhibited ceftriaxone MICs ≤0.015 µg/ml. The percentage of GISP isolates that exhibited elevated ceftriaxone MICs, defined as ≥0.125 µg/ml, has fluctuated around 0.2% between 2016 and 2020. Site-specific data are presented in the Site Profiles section of this report.