Parts of the Body Worked 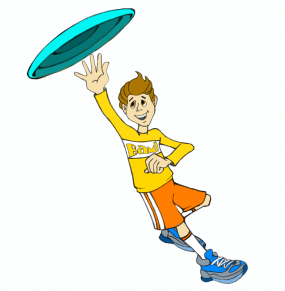 Just what does it take to play Flying Disc?

Of course the first thing you’ll need is a flying disc! The most common kinds are made of plastic and come in all sorts of cool colors. If you are planning to play a serious game, or want to play an organized game of Ultimate, you’ll also need cleats or tennis shoes with good tread. Kneepads aren’t a bad idea and are a great way to avoid scratching up your knees.

When playing a game of Flying Disc, just make sure that you don’t throw too hard and always try and stay on your feet while playing. If you are playing a more intense game of Ultimate also make sure to avoid diving for the flying disc.

It’s important to warm up and stretch before any game. Listen to your body! Don’t play through any pain. If you are injured, wait until you’ve healed before starting to play again. And if you have glasses or braces, wear protective eye or mouth guards.

Whether you’re just tossing the flying disc with friends or playing a competitive game of Ultimate, make sure to drink plenty of water before, during and after your game. It’s also a good idea to wear sunscreen to keep from burning and bug repellent to keep the bugs where they belong – off of you!

Flying Disc is a great way to spend time outside on a beautiful day. Just grab your flying disc and a few friends and you’ve got yourself a game!

One of the best parts about this sport is that you probably know more than you think about how to play! Like how to throw a backhand: Just stand with your feet shoulder-width apart, point yourself sideways, place your index finger on the outside rim with your middle finger extended along the top of the flying disc and your thumb underneath and flick your wrist toward your throwing partner.

A forehanded flying disc throw is more complicated, but just remember – practice makes perfect! Place your middle finger straight and flat against the inside rim of the flying disc so that the outer rim is between your thumb and your index finger. If you are right handed, stand sideways with your left shoulder forward, pull your right arm back to your outer thigh, keeping the flying disc at an angle, and flick your wrist forward, releasing it about halfway across your body.

Now that you’ve perfected throwing the flying disc, you’ve got to learn to catch it. There are two ways to catch a flying disc. In one, called the “Pancake,” the palms of your hands face each other and are held close to your body. That way, if you can’t catch the flying disc with your hands, it hits your body, not the ground. Another catch style is called the “Crocodile.” This catch involves holding your arms out in front of your body and clapping your hands together just like a crocodile’s mouth snapping shut.

Once you’ve mastered catching and throwing your flying disc, grab some friends and organize a game of Ultimate! This is a team sport played on a 70-yard by 40-yard rectangular field with an end zone that stretches 25 yards deep. Two teams of seven people each are needed to play. A team scores when the flying disc is thrown into the other team’s end zone. Ultimate players referee their own games, making good sportsmanship the most important thing to remember!

If you want to make your flying disc soar, make sure you put lots of spin on it when you throw. Spinning helps keep it from flipping over, which would put an end to your throw. Flying disc designers help you by making the edges thicker than the rest and by putting tiny ridges on the top to help keep it balanced.

In the 19th century, a group of New England college students played the first game of Flying Disc when they began throwing around old pie tins from the Frisbee Baking Company for fun. Who would have guessed this is how it all got started?

Frisbee ranks number eight on the list of the top ten toys of the 20th century.

The number of flying discs sold each year is top-secret information. However, estimates are that we buy more flying discs each year than footballs, baseballs and basketballs combined.