Influenza (flu) is a contagious respiratory illness that can cause mild to severe illnesses resulting in hospitalization or even death. Some people are more likely to develop severe illness from flu, especially people 65 years and older, children younger than 5 years, people with certain long-term health conditions, and pregnant women. Many people do not receive an annual flu vaccination, even though an annual flu vaccination is recommended by the Advisory Committee on Immunization Practices (ACIP) for all persons aged ≥6 months who do not have contraindications to vaccination and is the primary way to prevent sickness and death caused by flu.(1) Health care providers can use the information in this report to identify people who may be at risk of not getting vaccinated and ensure measures are in place to recommend and offer flu vaccination as early as possible to protect the greatest number of people.

Additional vaccination coverage estimates for the 2016–17 and earlier flu seasons for each state, Health and Human Services (HHS) region, and overall for the United States are provided on FluVaxView as interactive maps, figures, and tables. Coverage estimates for health care personnel and pregnant women are reported in the Morbidity and Mortality Weekly Report (MMWR).

Estimates of the reported place of flu vaccination by age group are also available. 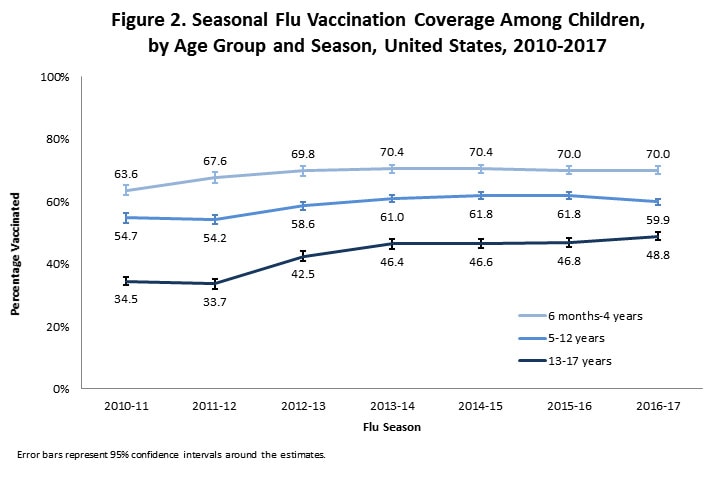 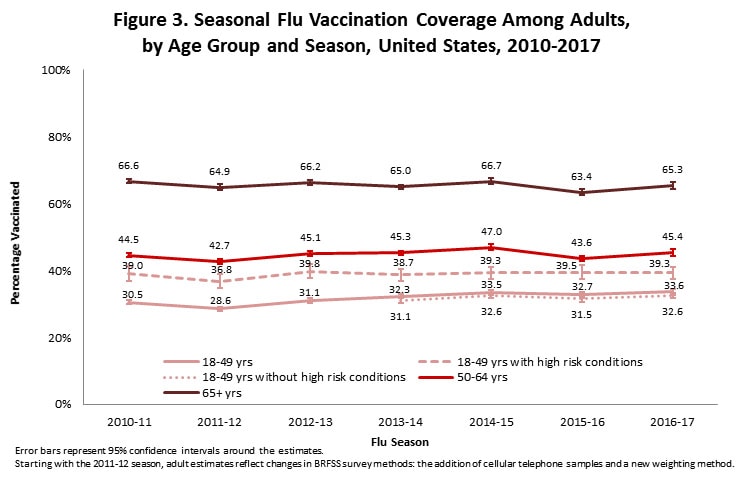 Based on reports of vaccination from survey respondents, the estimated number of persons who received one or more seasonal flu vaccinations was 41.8 million (95% Confidence Interval [CI]: 41.3–42.3 million) children (6 months through 17 years) and 107.4 million (95% CI: 105.9–108.9 million) adults (≥18 years), for an estimated 149.2 million (95% CI: 147.2–151.2 million) people vaccinated against seasonal flu during July 2016 through May 2017 among the U.S. population. These estimates do not include second doses given to children. The actual number of doses of flu vaccine distributed during the 2016–17 season was 145.9 million, indicating that the flu vaccination coverage estimates in this report may be high. Overestimates of vaccination coverage may be due to a combination of factors, including respondents having higher coverage than persons not surveyed (response bias), recall bias, or other factors. Examples of studies in which medical record validation has been compared with adult patient or parent report of vaccination estimated that coverage by parental report was seven percentage points too high for children 6–59 months and coverage by self-report was 5-11 percentage points too high for adults ≥65 years.(2;3) While the vaccination coverage estimates in this report were not validated with medical records, the NIS-Flu and BRFSS estimates do provide important information regarding yearly trends in reported vaccination over time.

Strategies to increase flu vaccination coverage in the United States include:

For this report, the Centers for Disease Control and Prevention (CDC) analyzed data from the National Immunization Survey-Flu (NIS-Flu) for children 6 months through 17 years and the Behavioral Risk Factor Surveillance System (BRFSS) for adults ≥18 years to estimate national, state, and local flu vaccination coverage from the 2016–17 flu season.

CDC analyzed NIS-Flu and BRFSS data collected September (BRFSS) or October (NIS-Flu) 2016 through June 2017 from all 50 states and the District of Columbia to estimate national- and state-level flu vaccination coverage for vaccines administered from July 2016 through May 2017 for the 2016–17 flu season. These findings were compared with 2015–16 flu season estimates. Estimates are also included as a supplemental table to this report for Guam, Puerto Rico, the U.S. Virgin Islands, and selected local areas.

The NIS-Flu has three components: the NIS, which includes households with children 19–35 months, the NIS-Teen, which includes households with children 13–17 years, and a short flu vaccination module, which is conducted for households with children 6–18 months and 3–12 years. The NIS-Flu is a national dual landline and cellular list-assisted random-digit-dialed telephone survey of households. Respondents ≥18 years were asked if their child had received a flu vaccination since July 1, 2016, and, if so, in which month and year; this information was parent-reported and not verified by medical records. The range of the Council of American Survey and Research Organizations (CASRO) response rates for the NIS-Flu across the components of the NIS-Flu were 50.8% to 53.1% for landline and 26.2% to 28.7% for cellular telephones.

BRFSS is an ongoing state-based monthly telephone survey which collects information on health conditions and risk behaviors from randomly selected people ≥18 years among the U.S. population. BRFSS respondents were asked if they had received a flu vaccine in the past 12 months, and if so, in which month and year; this information was self-reported and not verified by medical records. The median state BRFSS response rate was 47.4% for September–December 2016 and 45.5% for January–June 2017. Starting in 2011, BRFSS methods changed by adding persons in households with only cellular telephone service and improving weighting procedures; these changes were reflected in the 2011–12 and subsequent flu vaccination coverage estimates.(9)

Flu vaccination coverage estimates from both surveys were calculated using Kaplan-Meier survival analysis to determine the cumulative flu vaccination coverage (≥1 dose) July 2016 through May 2017 using monthly interview data collected September (BRFSS) or October (NIS-Flu) 2016 through June 2017. NIS-Flu data were used to estimate coverage for children 6 months through 17 years and BRFSS data were used to estimate coverage for adults ≥18 years. Coverage estimates for all persons ≥6 months were determined using combined state-level monthly estimates weighted by the age-specific populations of each state.(10) For the 21.8% of NIS-Flu and 6.6% of BRFSS participants who indicated they had been vaccinated but had a missing month and year of vaccination, information was imputed from donor pools matched for week of interview, age group, state of residence, and race/ethnicity. Information on high-risk conditions was missing for 1.1% of adults and race/ethnicity was missing for 1.7% of adults; adults with missing data were not included in the estimates by risk condition or race/ethnicity. Results from both surveys were weighted and analyzed using SAS and SUDAAN statistical software to account for the complex survey design. Differences between groups and between 2015–16 and 2016–17 seasons were determined using t-tests with significance at p<0.05. Differences mentioned in this report were statistically significant.

The estimates in this report are subject to the following limitations. First, flu vaccination status was based on self or parental report and not validated with medical records and, thus, is subject to respondent recall bias.(2;3) A recent study of children 6–23 months included estimates of flu coverage with ≥1 doses based upon provider report; when these estimates were compared with the parent-reported estimates found on FluVaxView, the parent-reported estimates were between 12-17 percentage points higher than provider report for the 2010–11 through 2012–13 flu seasons.(11) Also in this study, racial/ethnic differences among children 6–23 months were identified based on provider-reported vaccination status, but the pattern of racial/ethnic vaccination differences was different than patterns found on FluVaxView based on parental report.(11) Incomplete records and reporting, however, might affect provider-reported vaccination histories.(11) Second, response rates for NIS-Flu and BRFSS surveys were low and nonresponse bias may remain even after weighting adjustments. A comparison of NIS-Flu estimates with those from National Health Interview Survey suggests that the NIS-Flu estimates have a slight upward nonresponse bias.(12;13) Third, combining NIS-Flu and BRFSS estimates allowed estimation of coverage for all persons ≥6 months; however, differences in survey methodology (e.g., different sampling frame, survey design, exact survey question wording, response rates, and weighting) may result in different levels of bias that are averaged for this group. Fourth, the number of persons vaccinated was overestimated, evidenced by a higher number vaccinated than doses distributed as has occurred previously.(14)

* Estimates of the percentage of people vaccinated are based on interviews conducted beginning September (BRFSS) or October (NIS-Flu) 2016 through June 2017 and reported vaccinations from July 2016 through May 2017. † Excludes U.S territories. ‡ Percentage vaccinated. Percentages are weighted to the U.S. population. Month of vaccination was imputed for respondents with missing month of vaccination data. § Confidence interval (CI) half-widths. || Statistically significant difference between the 2016–17 season and the 2015–16 season by t-test (p<0.05). ¶ Selected high risk conditions includes people with asthma, diabetes, heart disease, chronic obstructive pulmonary disease, or cancers other than skin cancer. **Statistically significant difference between male and female estimates by t-test (p<0.05). ‡‡ Includes Native Hawaiian or other Pacific Islander, multiracial, and other races. §§ The National Health Interview Survey (NHIS) is the data source used to monitor the Healthy People objectives for flu vaccination (IID-12.11-14). Final NHIS estimates for the 2016–17 season will be available by September 2018. A comparison of estimates from NIS-Flu and BRFSS to NHIS is available.