Influenza (flu) is a contagious respiratory illness that can be serious, sometimes resulting in hospitalization and death. Anyone can get sick from the flu, but some people, including older people, young children, people with certain health conditions, and pregnant women, are at higher risk for flu-related complications such as pneumonia.

Flu vaccination is the best way to prevent the flu and potentially serious flu-related complications  (1, 2). The Centers for Disease Control and Prevention (CDC) recommends that everyone 6 months and older get a flu vaccination each flu season (3).

This report summarizes data from the National Immunization Survey-Flu (NIS-Flu) for children 6 months through 17 years and the National Internet Flu Survey (NIFS) for adults 18 years and older residing in the United States. NIS-Flu data were collected by telephone surveys of parents conducted during October 1–November 12, 2016, while the NIFS data were collected through an Internet panel survey conducted during October 27–November 9, 2016. This report provides early flu season estimates of how many people (children and adults) in the United States had received a flu vaccination. Final 2016–17 flu season vaccination coverage estimates will be available at CDC FluVaxView in September 2017. 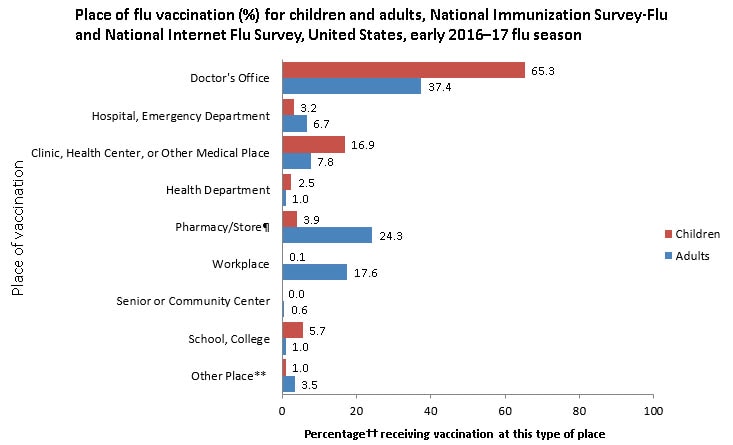 Approximately 3 out of every 5 persons aged 6 months and older in the United States had not received a flu vaccination by early November. Continued efforts are needed to increase the percentage of the population vaccinated during the next few months in order to reduce the burden of flu, including:

The NIS-Flu is an ongoing, national list-assisted random-digit-dialed dual-frame landline and cellular telephone survey of households with children. It includes three components: the NIS for children 19–35 months, the NIS-Teen for children 13–17 years, and a short flu module for all other children 6–18 months and 3–12 years not eligible for the NIS and NIS-Teen identified during the household screening process. Respondents 18 years and older were asked if their child had received a flu vaccination since July 1, 2016, and, if so, in which month and year. The survey interviewers conducted the survey in both English and Spanish; interviews conducted in other languages used language-line interpretation services.

Flu vaccination coverage estimates presented in this report are based on interviews conducted from October 1 through November 12, 2016, to cover vaccinations received from July–November, 2016. A total of 24,528 NIS-Flu interviews were completed for children 6 months–17 years. Of these, 4,446 were by landline telephone and 20,082 were by cellular telephone. For reporting place of vaccination, three weeks of NIS-Flu interviews (October 23–November 12, 2016) were combined; the place of vaccination estimates are based on 3,972 vaccinated children.

Flu vaccination coverage estimates represent the approximate cumulative proportion of persons vaccinated as of November 12, 2016. Coverage was calculated using an enhanced estimation strategy that resembles the Kaplan-Meier estimation procedure (11). The flu vaccination coverage estimates represent receipt of at least one dose of flu vaccine. Place of vaccination was estimated using simple weighted proportions. All estimates were weighted based on the probability of selection of the telephone number, including adjustments for nonresponse at the telephone number resolution and household screening stages, probability of selecting the child of interest within the household, and for person nonresponse. The data were also weighted using a ratio adjustment to population controls (age, sex, race/ethnicity, and geographic area). All NIS-Flu estimates reported here were calculated by NORC at the University of Chicago utilizing weights they developed.

The sample was stratified by age group and by race/ethnicity. For this ongoing panel, participants are initially chosen by a random selection of residential addresses. Persons in selected households are then invited to participate in the web-enabled KnowledgePanel®. For those who agree to participate but do not already have Internet access, GfK provides both a laptop and Internet access at no cost. People who already have computers and Internet service participate using their own equipment. Panelists receive unique log-in information for accessing surveys online and are sent e-mails throughout each month inviting them to participate in a variety of surveys. The 2016 NIFS sampling design was a single-stage stratified sample with oversampling of select subgroups of particular analytical interest. Twelve mutually exclusive design strata were defined as the interaction of two categorical variables known for all members of the probability-based Internet panel—age (18–49 years, 50–64 years, and 65 years and older) and race/ethnicity (Hispanic, non-Hispanic white, non-Hispanic black, and non-Hispanic, other/multiple races). Independent random samples were selected within each design stratum.

The field period of data collection for the NIFS was October 27–November 9, 2016. A survey invitation was sent to a sample consisting of 7,014 panel members. A total of 4,305 completed the NIFS. All NIFS estimates reported here were calculated by RTI utilizing analysis weights developed by GfK, which adjusted the base weights for survey nonresponse and for coverage of the target population. For this purpose, an iterative proportional fitting (raking) procedure was used to produce final NIFS analysis weights that aligned with respect to all study benchmark marginal distributions simultaneously. The geodemographic dimensions used in the raking procedure included gender, age group, race/ethnicity, education, census region, household income, home ownership status, and metropolitan area. The corresponding population totals for the geodemographic dimensions were obtained from the Current Population Survey (March 2016 Supplement) general-population benchmarks for ages 18 and older.

The raked weights were examined for outliers; a small number of outlier weights were trimmed at the extreme upper and lower tails of the weight distribution. In the final step, the trimmed weights were scaled to the sum of the total sample size of all eligible respondents.

Flu vaccination coverage estimates represent the approximate cumulative proportion of adults vaccinated as of November 9, 2016. The survey responses “don’t know” and “refused” were excluded from the analyses.

5NORC at University of Chicago

†All percentages in the table are weighted to the U.S. population.

§Adults were considered as having a high-risk medical condition if they had ever been told by a doctor or other health professional that they had chronic asthma, a lung condition other than asthma, diabetes, heart disease (other than high blood pressure, heart murmur, or mitral valve prolapse), a kidney condition, a liver condition, obesity, sickle cell anemia or other anemia, a neurologic or neuromuscular condition that makes it difficult to cough, or a weakened immune system caused by chronic illness or by medicines such as chemotherapy, steroids, and transplant medicines taken for chronic illness such as cancer and HIV/AIDS.

||Race-ethnicity is either reported by parent/guardian (NIS-Flu) or self-reported (NIFS). Persons of Hispanic ethnicity may be of any race. “Non-Hispanic, other/multiple races” includes Asians, American Indians or Alaska Natives, Native Hawaiians or other Pacific Islanders, and persons who selected “other” race or multiple races.

**“Other place” includes military-related places, other schools such as trade schools, residences, and other unspecified nonmedical places.

††Percentage may not add to 100 due to rounding.