Pregnant women are at increased risk for complications due to flu, particularly during the second and third trimesters. Additionally, infants younger than 6 months also are at high risk of serious flu illness but are too young to be vaccinated (1,2). Vaccination lowers the risk of flu illness in pregnant women and flu-related hospitalizations in their infants for the first several months of life (1,3-9). The Centers for Disease Control and Prevention (CDC), the American College of Obstetricians and Gynecologists, the American College of Nurse Midwives, and the American Academy of Family Physicians recommend flu shots for all women who are or will be pregnant during the flu season (1,3-5). 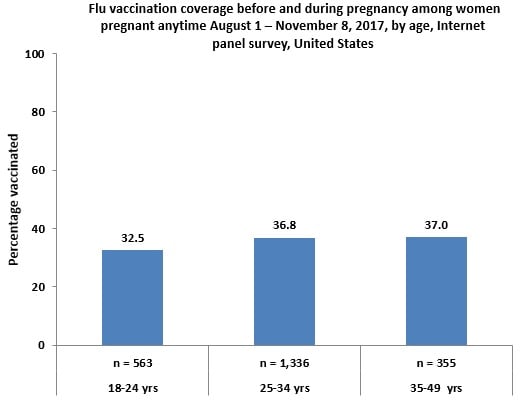 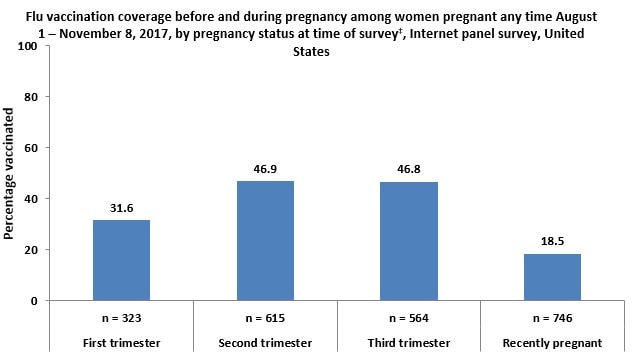 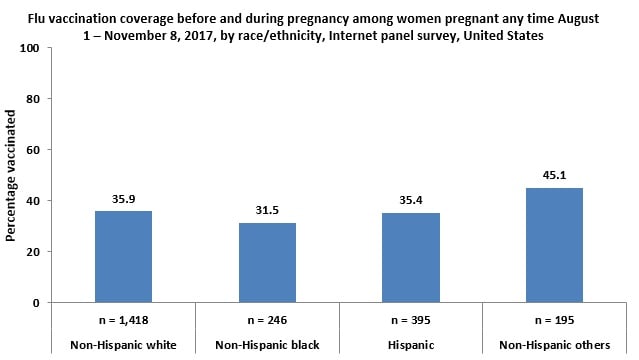 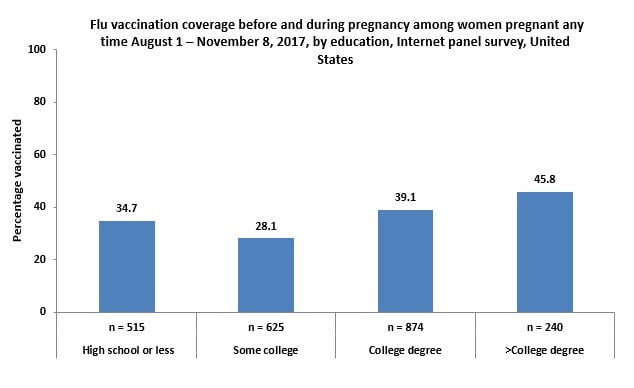 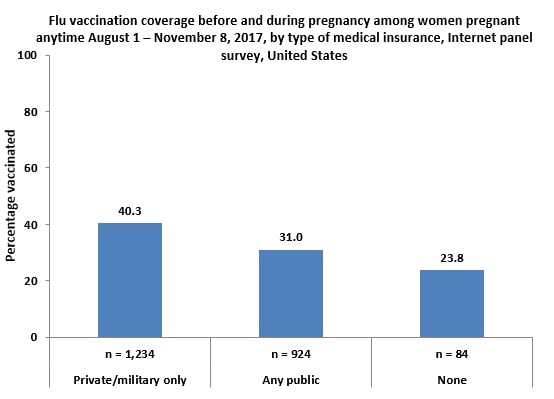 Coverage by Other High-Risk Conditions† 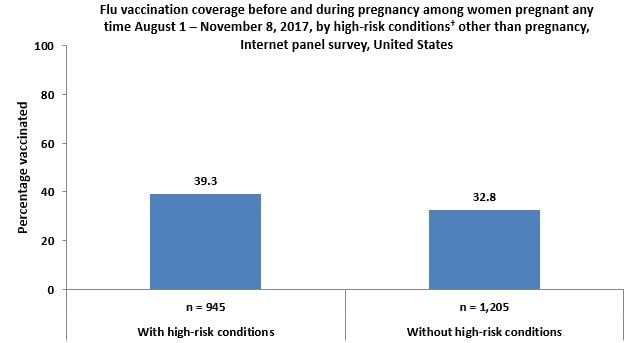 The most commonly reported place for receiving flu vaccination before and during pregnancy among vaccinated women was in the office of an obstetrician/gynecologist (OB/GYN) or midwife (50.1%).

Respondents who had been vaccinated by the time of the survey‡ were asked to report their main reason for receiving a flu vaccination. 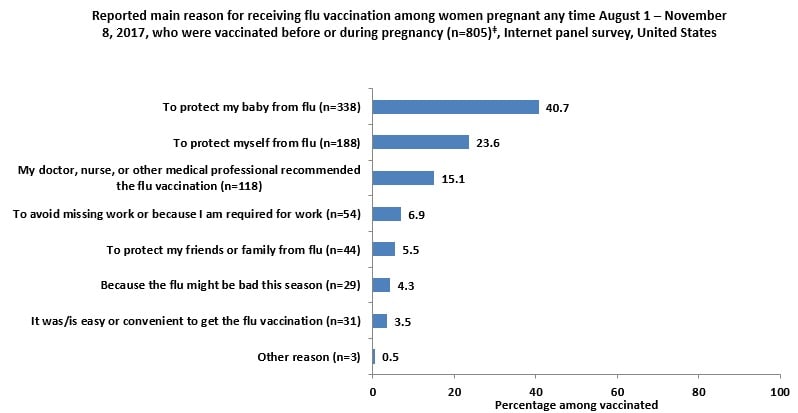 Unvaccinated respondents who reported that they did not intend to be vaccinated during this flu season§ were asked their reasons for not receiving or not planning to get a flu vaccination.

Reasons for Not Yet Receiving Vaccination

Unvaccinated respondents who reported that they intended to be vaccinated during this flu season¶ were asked their reasons for not yet receiving vaccination.

Overall, early 2017–18 season flu vaccination coverage before or during pregnancy among women pregnant any time from August 2017 through the time of the survey was 35.6%, suggesting that nearly two-thirds of pregnant women are not protected against influenza. Pregnant women may receive any licensed, recommended, age-appropriate influenza vaccine at any time during pregnancy, before and during the influenza season, as soon as vaccine is available. A strong provider recommendation with an offer of vaccination may help improve vaccination coverage, especially for pregnant women who were not vaccinated but intended to get vaccinated, including the 37% who had not had the opportunity or time and the 17% who reported not receiving a recommendation or offer of vaccination. CDC pdf icon[280 KB, 2 pages], ACOGexternal icon, and the American College of Nurse-Midwivesexternal icon provide resources to help providers recommend and offer vaccination or refer for vaccination. If a provider cannot offer vaccination in their office, a referral to the nearest site where a vaccination can be givenexternal icon can help a pregnant woman receive the necessary vaccines to protect themselves and their infant.

In September 2017, results of a study conducted during the 2010–11 and 2011–12 influenza seasons were published which reported an association of repeated flu vaccination during the first trimester with spontaneous abortion (10). Multiple earlier studies have indicated there is no association between flu vaccination and adverse pregnancy outcomes, including spontaneous abortion (11-15). Many pregnant women who had not been vaccinated but intended to get vaccinated this season reported preferring to wait until later in their pregnancy or after pregnancy. Since flu poses a danger to pregnant women and their infants, CDC, ACIP, and ACOG continue to recommend flu vaccination for pregnant women during any trimester to protect both pregnant women and their babies from flu infection (16-17). CDC and ACOGexternal icon have posted information to help providers answer questions that may come up after their flu vaccination recommendation.

Medical professionals should vaccinate pregnant women and others throughout the flu season:

Information is available at:

CDC conducted an Internet panel survey from November 1–8, 2017 to provide early-season estimates of flu vaccination coverage and information on knowledge, attitudes, and behaviors related to flu vaccination among pregnant women. Women 18–49 years who were pregnant at any time since August 1, 2017, were recruited from SurveySpot, a general-population Internet panel. Eligible respondents were either pregnant at the time of the survey or had a pregnancy that ended between August 1, 2017 and the time of the survey. Of 2,333 panel members who were eligible and started the survey, 2,255 (96.7%) completed the online survey. One respondent was excluded from the analysis due to missing information about receipt of flu vaccination. Data were weighted to reflect the age, race/ethnicity, and geographic distribution of the total U.S. population of pregnant women (20-22). SurveySpot is the same recruitment mechanism that was used in the November 2016 survey; however, a change in survey methodology shifted the proportion of survey respondents using a smartphone or other handheld device to participate in the survey from less than 20% in 2016 to 73% in 2017. This change in survey methodology may explain the shifting of the sample to pregnant women of younger age, less education, and with public insurance compared with the last year’s survey. Prior research has found that Americans who rely on smartphones for online access are more likely to be younger, have lower household income and lower levels of education, and be non-white compared with those who have other options, such as a desktop or laptop computer, for Internet access (23). These characteristics have also been found to be associated with lower vaccination coverage in pregnant women (24).

Survey respondents were asked if they had received a flu vaccination since July 1, 2017, and if so, in which month they received it, as well as whether they received the vaccination before, during, or after pregnancy. Pregnancy status questions included whether respondents were currently pregnant at the interview time or had been pregnant any time since August 1, 2017. Women who reported being vaccinated since July 1, 2017, and who were vaccinated before or during pregnancy were counted as vaccinated. All respondents were asked if their doctor or other medical professional had recommended or offered the flu vaccine. They were also asked about their attitudes toward and beliefs about flu and flu vaccination.

Weighted analyses were conducted using SAS (version 9.3) survey procedures. Because the opt-in Internet panel sample was based on those who initially self-selected for participation in the panel rather than a random probability sample, statistical measures such as calculation of confidence intervals and tests of difference were not performed (25). A difference of 5 percentage points was considered a notable difference.

These results are preliminary and should be interpreted with caution. The follow-up Internet panel survey in April 2018 will assess flu vaccination coverage at the end of the flu season.

‡Excludes 249 women who reported being vaccinated after their pregnancy ended.

§Includes unvaccinated respondents who reported that they probably or definitely do not intend to be vaccinated before the end of the flu season.

||Respondents could select more than one reason.

¶Includes unvaccinated respondents who reported that they probably or definitely will get vaccinated before the end of the flu season.