The Advisory Committee on Immunization Practices (ACIP) recommends that all health care personnel (HCP) receive an annual influenza vaccination to reduce influenza-related morbidity and mortality among HCP and their patients as well as to reduce absenteeism among HCP (1-4). CDC conducted an opt-in Internet panel survey of 2,401 U.S. HCP to estimate influenza vaccination coverage during the 2019–20 influenza season. Overall, 80.6% of HCP reported receiving influenza vaccination during the 2019–20 season, similar to reported coverage in the previous season. Coverage was higher among HCP who were required by their employer to be vaccinated (94.4%) than among those whose employer did not require vaccination (69.6%).  By setting, vaccination coverage was highest among HCP in ambulatory care and hospital settings with vaccination requirements (96.1% and 95.7%, respectively), and lowest in ambulatory and long-term care settings without vaccination requirements, promotion, or on-site offer (47.7% and 49.9%, respectively). Implementing workplace strategies to improve vaccination coverage among HCP, particularly in long-term care settings, including active promotion of on-site vaccinations can help ensure HCP and patients are protected against influenza (5). Reducing the overall burden of respiratory illnesses in the upcoming season by maximizing HCP influenza vaccination uptake can help protect vulnerable populations including long-term care facility residents and conserve healthcare resources for treatment of COVID-19.

An Internet panel survey of HCP was conducted during March 31–April 30, 2020, to provide estimates of influenza vaccination coverage among HCP during the 2019–20 influenza season. Similar surveys have been conducted since the 2010–11 influenza season, and survey methodology has been described previously (6). Respondents were recruited from two preexisting national opt-in Internet sources: Medscape, a medical website managed by WebMD Health Professional Network,* and general population Internet panels operated by Dynata (formerly known as Survey Sampling International (SSI)).† Responses were weighted to the distribution of the U.S. population of HCP by occupation, age, sex, race/ethnicity, work setting, and Census region.‡ Because the study sample was based on HCP from opt-in Internet panels rather than probability samples, statistical tests were not conducted.§ A change of at least 5 percentage points between estimates has consistently been used with this survey to denote an increase or decrease; estimates with smaller differences were considered similar (6,7).

Among the 2,544 persons who started the survey from either source (Medscape or Dynata) and met eligibility criteria based on responses to the screening questions (i.e., were not screened out due to employment status, work setting, occupation, sampling targets having been met, or incomplete response to the screening questions), 2,454 (96.5%) individuals completed the survey.|| Fifty-three respondents (2.2%) with completed surveys who reported working in “other health care settings” were excluded because examination of their survey responses indicated that they were either unlikely to have contact with patients or unlikely to have worked in one of the health care settings of interest for this analysis. The final analytic sample included 2,401 HCP.

Findings from this survey indicate that many HCP, such as assistants/aides, other clinical personnel and non-clinical personnel, are unvaccinated, highlighting the need for more intensive interventions to improve annual influenza vaccination among different racial groups, in work settings, and in settings without employer vaccination requirements. Beneficial resources include CDC’s long-term care web-based toolkit,¶ which provides access to resources, strategies and educational materials, and interventions recommended by the Community Preventive Services Task Force, including providing and actively promoting on-site vaccination at no cost (5). These resources can be used by health care employers to increase influenza vaccination coverage among HCP and reduce influenza-associated morbidity and mortality among patients. Furthermore, routine monitoring and reporting of vaccine coverage by race/ethnicity and other socio-demographic factors might also help reduce racial and ethnic vaccination differences (8).

Finally, with the COVID-19 pandemic, it is especially important to implement systems that support and encourage the overall vaccination of HCP, in particular those working at long-term care facilities. Previous findings have demonstrated that outbreaks of COVID-19 in these settings have a critical impact on the health of vulnerable older adults (9). Given the low vaccination coverage among HCP in long-term care facilities (69.3%) in the 2019-20 season, efforts will be needed to improve influenza vaccination uptake among these HCP to better protect residents and themselves. Many of the long-established public health actions to increase influenza vaccination coverage among HCP can be used not only for routine vaccinations but also for COVID-19 vaccine when it becomes available.

The findings in this report are subject to at least four limitations. First, the study used a nonprobability sample of volunteer members of Medscape and Dynata Internet panels, which might affect the generalizability of these findings to the U.S. HCP population even after responses were weighted to be representative of the U.S. population of HCP. Second, vaccination status was self-reported and may be subject to recall bias. Third, statistical tests were not conducted and statistically significant differences between groups were not measured due to using a nonprobability sample. Finally, coverage findings from Internet survey panels have differed from population-based estimates from the National Health Interview Survey in past influenza seasons, although trends in coverage were similar across seasons (10). 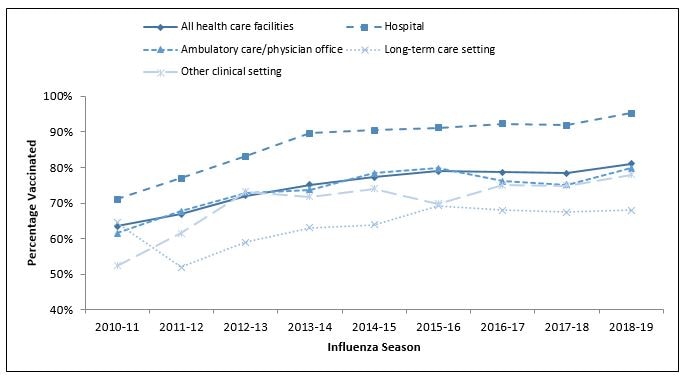 * Persons who worked in a place where clinical care or related services were provided to patients, or whose work involved face-to-face contact with patients or who were ever in the same room as patients.

†Assistants, aides, and nonclinical personnel (such as administrators, clerical support workers, janitors, food service workers, and housekeepers) were recruited from general population Internet panels operated by Dynata. Additional information on Dynata and its incentives for online survey participants is available at https://www.surveysampling.comexternal icon.

§Additional information on obstacles to inference in nonprobability samples is available at: https://www.aapor.org/AAPOR_Main/media/MainSiteFiles/NPS_TF_Report_Final_7_revised_FNL_6_22_13.pdfexternal icon and https://www.aapor.org/getattachment/Education-Resources/For-Researchers/AAPOR_Guidance_Nonprob_Precision_042216.pdf.aspxexternal icon. While the estimates reported here have variance, there has been no attempt to quantify the size of the variance.

||A survey response rate requires specification of the denominator at each stage of sampling. During recruitment of an online opt-in survey sample, such as the Internet panels described in this report, these numbers are not available; therefore, a response rate cannot be calculated. Instead, the survey completion rate is provided.