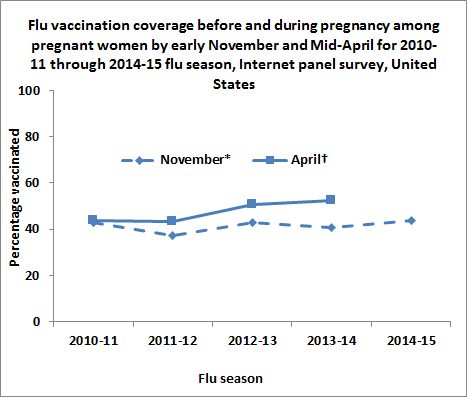 Influenza (flu) can cause severe illness among pregnant women and result in preterm labor and increased risk for hospitalization and death (1).

Infants younger than 6 months are at high risk of severe complications from the flu, but they are too young to be vaccinated (4). Infants whose mothers get the flu shot while pregnant have a lower risk of flu illness and flu-related hospitalizations during the first 6 months of life (1, 5–6). 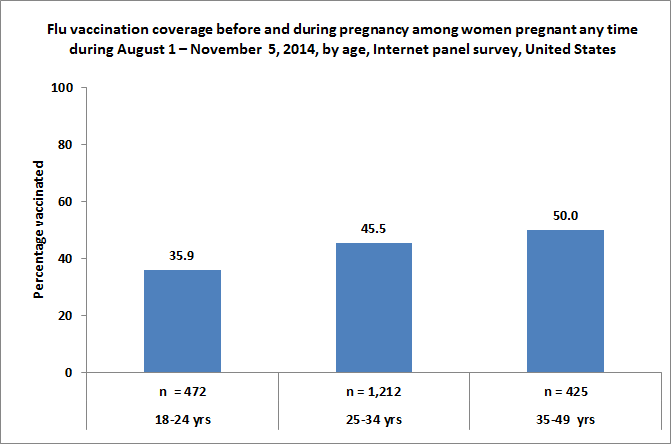 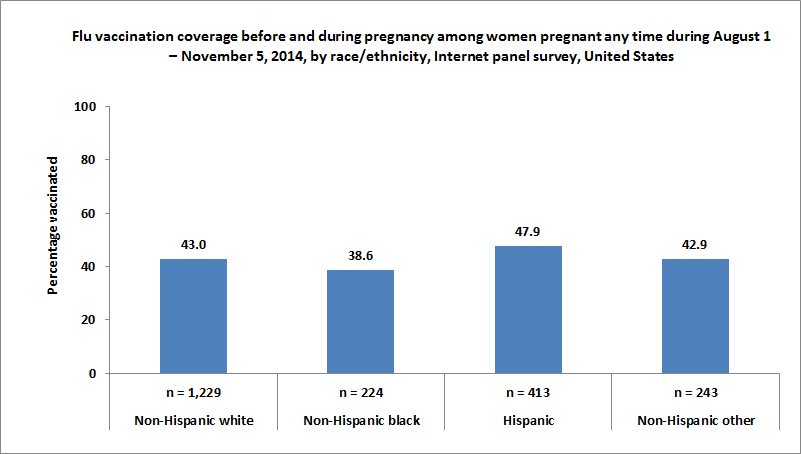 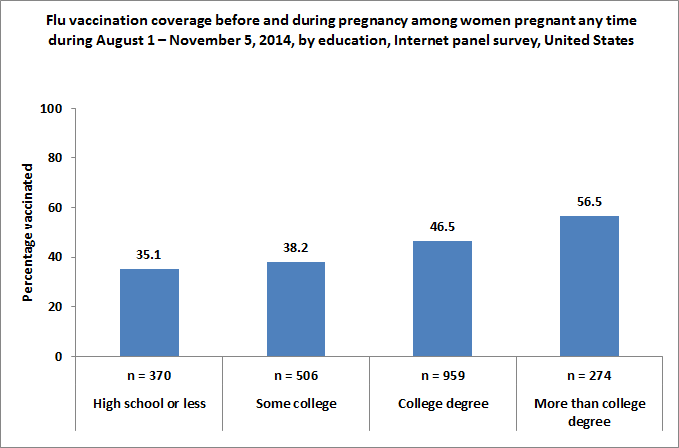 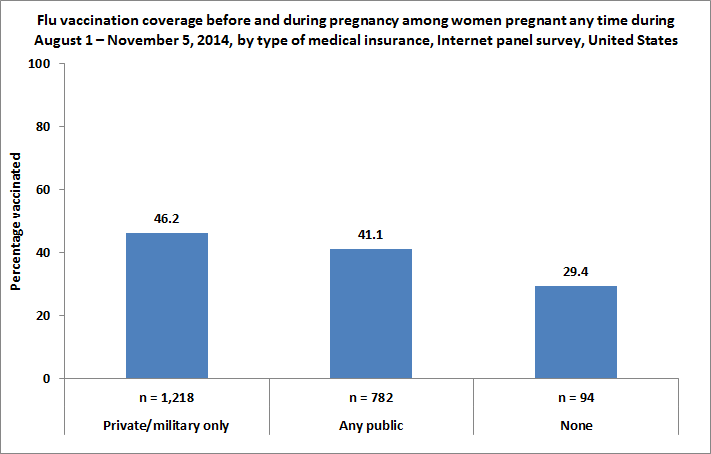 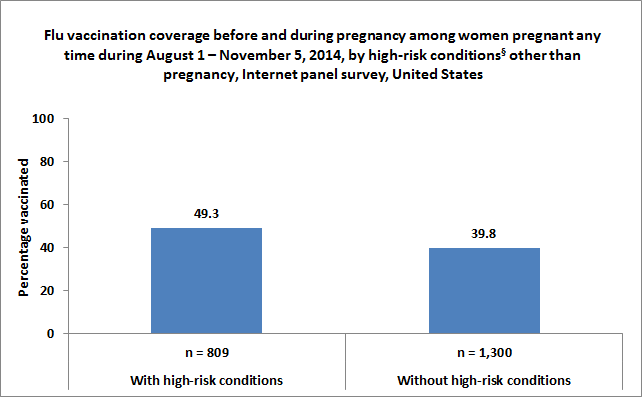 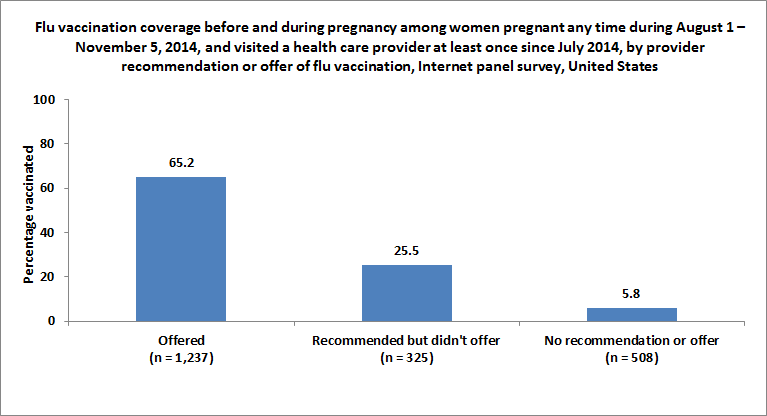 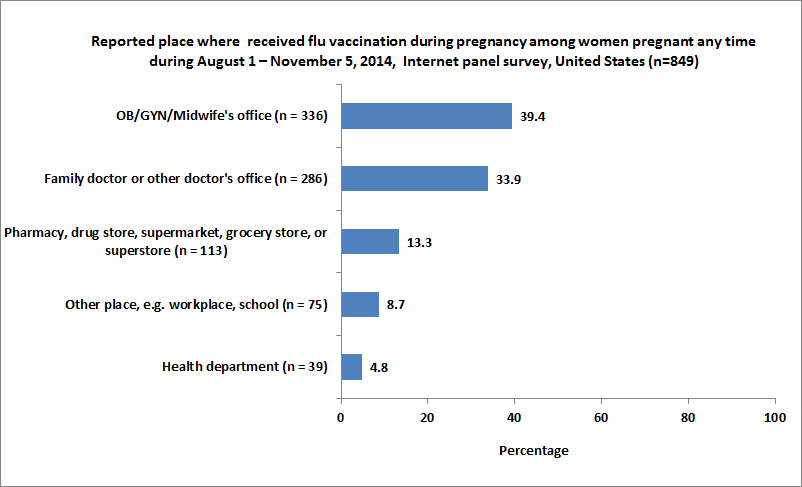 Respondents who had been vaccinated by the time of the survey were asked to report their main reason for receiving a flu shot. 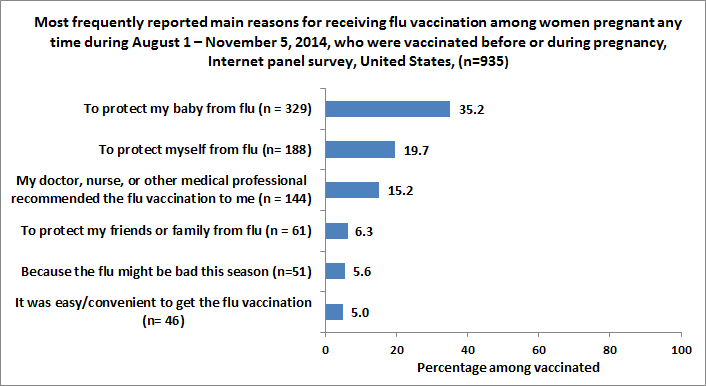 Unvaccinated respondents who reported that they did not intend to be vaccinated during this flu season|| were asked to report their main reason for not receiving a flu shot. 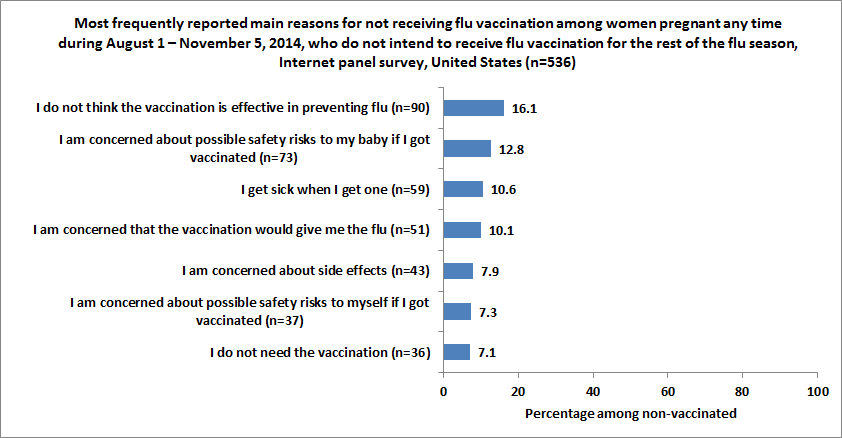 Increase the proportion of pregnant women who receive a recommendation for and offer of flu vaccination from their doctor or other medical professional:

Inform pregnant women about the risk of flu infection for them and their infants and about the benefits and risks of flu vaccination:

CDC conducted an Internet panel survey from October 29-November 5, 2014, to provide early season estimates of flu vaccination coverage and information on knowledge, attitudes, and behaviors related to flu vaccination among pregnant women. Women 18–49 years who were pregnant at any time since August 1, 2014, were recruited from SurveySpot, a general population Internet panel. SurveySpot is the same recruitment mechanism that was used in the November 2013 survey. Eligible respondents were either pregnant at the time of the survey or had recently been pregnant. Of 2,178 panel members who were eligible and started the survey, 2,111 (96.9%) completed the online survey. The sample was weighted to reflect the age group, racial/ethnic, and geographic distribution of the total U.S. population of pregnant women during 1995-2008 (12–13).

Survey respondents were asked if they had a flu vaccination since July 1, 2014, and if yes, in which month and whether they received the vaccination before, during, or after pregnancy. Pregnancy status questions included whether respondents were currently pregnant at interview or had been pregnant anytime since August 1, 2014. The beginning and end of pregnancy date or expected due date were asked to determine the actual month of pregnancy.  Women who reported receiving vaccination since July 1, 2014, and who were vaccinated before or during pregnancy were counted as vaccinated. All respondents were asked if their doctor or other medical professional had recommended or offered the flu vaccine. They were also asked about their attitudes toward and beliefs about flu and flu vaccination.

Weighted analyses were conducted using SAS v9.2 survey procedures. Because the opt-in Internet panel sample was based on those who initially self-selected for participation in the panel rather than a random probability sample, statistical measures such as calculation of confidence intervals and tests of differences were not performed (14). A difference of five percentage points was considered a notable difference.

These results are preliminary and should be interpreted with caution. The follow-up Internet panel survey in April 2015 will assess flu vaccination coverage at the end of the flu season. State-specific estimates of flu vaccination coverage for the 2014-15 season will be provided later from the Pregnancy Risk Assessment Monitoring System (PRAMS). National coverage estimates from the Behavioral Risk Factor Surveillance System (BRFSS) and National Health Interview Survey (NHIS) will be provided later for comparison to the Internet panel survey estimates.

Despite these limitations, Internet panel surveys are a useful surveillance tool for timely early season and postseason evaluation of flu vaccination coverage and knowledge, attitude, practice, and barrier data.

‡ Includes women who may have been vaccinated after their pregnancy ended. The PRAMS estimate includes pregnant women from 21 states and is not a national estimate.

|| Includes unvaccinated respondents who reported that they probably or definitely do not intend to be vaccinated before the end of the flu season.