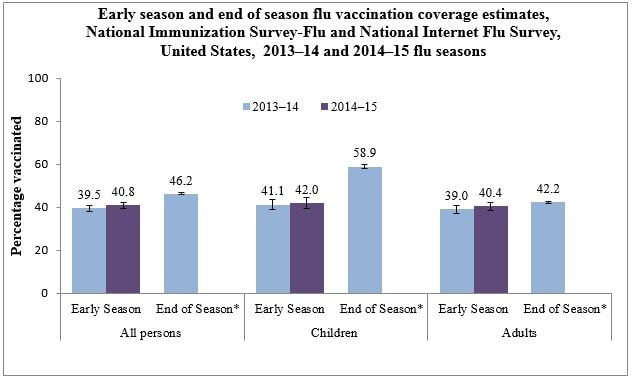 Influenza (flu) is a serious disease that can lead to hospitalization and sometimes even death.

Flu vaccination is the best way to prevent people from getting the flu and potentially serious flu-related complications (1,2). CDC recommends that everyone 6 months and older get a flu vaccination each flu season (3).

CDC collected survey data with the National Immunization Survey-Flu (NIS-Flu) for children 6 months through 17 years and the National Internet Flu Survey (NIFS) for adults 18 years and older for this report. NIS-Flu data were collected by telephone surveys of parents conducted during October 1–November 15, 2014, while the NIFS data were collected through an Internet survey conducted during October 29–November 12, 2014. The results of these surveys provide information for use by vaccination campaigns during National Influenza Vaccination Week (NIVW), held December 7–13, 2014. This report provides early flu season estimates of how many people in the United States had received a flu vaccination. Final 2014–15 flu season vaccination coverage estimates will be available after the end of the season. 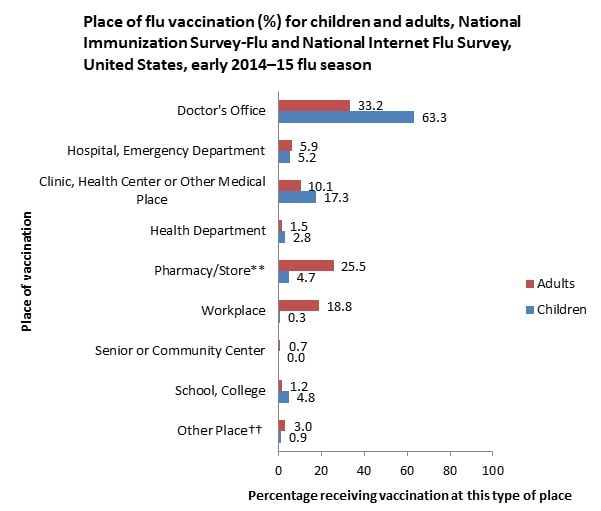 Although many children (42.0%) and adults (40.4%) were vaccinated early in the 2014–15 flu season, more than half of the United States population ≥ 6 months had not received a flu vaccination by the end of the survey period. Continued efforts are needed to expand vaccination coverage during the next few months of this season to increase the number of people protected against the flu and to reduce the risk of flu, including:

Racial and ethnic disparities among adults:

The NIS-Flu is an ongoing, national list-assisted random-digit-dialed dual frame land line and cellular telephone survey of households with children. It includes three components: the NIS for children 19–35 months, the NIS-Teen for children 13–17 years and a short flu module for all other children 6–18 months and 3–12 years not eligible for the NIS and NIS-Teen identified during the household screening process. Respondents ≥18 years were asked if their child had received a flu vaccination since July 1, 2014 and, if so, in which month and year. The survey interviewers conduct the survey in both English and Spanish; interviews conducted in other languages used language line interpretation services.

Flu vaccination coverage estimates presented in this report are based on interviews conducted from October 1–November 15, 2014. A total of 26,882 NIS-Flu interviews were completed for children 6 months to 17 years. Of these, 14,282 were by landline telephone and 12,600 were by cellular telephone. For reporting place of vaccination, three weeks of NIS interviews (October 26–November 15, 2014) were combined; therefore, the place of vaccination estimates are based on 5,157 vaccinated children.

Flu vaccination coverage estimates represent approximately the cumulative proportion of persons vaccinated as of November 12, 2014. Coverage was calculated using an enhanced estimation strategy that resembles the Kaplan-Meier estimation procedure (5). The flu vaccination coverage estimates represent receipt of at least one dose of flu vaccine. Place of vaccination was estimated using simple weighted proportions. All estimates were weighted based on the probability of selection of the telephone number, including adjustments for non-response at the telephone number resolution and household screening stages, probability of selecting the child of interest within the household, and for person non-response. The data were also weighted using a ratio adjustment to population controls (age, sex, race/ethnicity, and geographic area). All NIS-Flu estimates reported here were calculated by NORC at the University of Chicago, utilizing weights they developed.

The adult estimates are based on data from the 2014 NIFS, which was conducted by RTI International and GfK Custom Research, LLC and sponsored by CDC, to rapidly collect flu vaccination-related data early during the 2014–15 flu season. The survey was conducted using a probability-based panel designed to be representative of the U.S. population. The internet panel survey was conducted in English only.

The sample was stratified by age group and by race/ethnicity. For this ongoing panel, participants are initially chosen by a random selection of telephone numbers and residential addresses. Persons in selected households are then invited by telephone or mail to participate in the web-enabled KnowledgePanel®. For those who agree to participate but do not already have Internet access, GfK provides both a laptop and Internet access at no cost. People who already have computers and Internet service participate using their own equipment. Panelists receive unique login information for accessing surveys online, and are sent e-mails throughout each month inviting them to participate in surveys. The field period of data collection for the NIFS was October 29–November 12, 2014. A survey invitation was sent to a sample consisting of 6,771 panel members. A total of 3,325 completed the NIFS. All NIFS estimates reported here were calculated by RTI, utilizing analysis weights developed by GfK. Survey responses “don’t know” and “refused” were excluded from the analyses.

To produce a national estimate of flu vaccination coverage for all persons ≥6 months, the estimates from the NIS-Flu for children and from the NIFS for adults were combined by weighting them by population size (based on census population counts).

* End-of-season estimates are from the National Immunization Survey-Flu for children and the Behavioral Risk Factor Surveillance System for adults (Flu Vaccination Coverage, United States, 2013-14 Influenza Season). The 2014-15 end-of-season estimates will not be available until September 2015.

|| Adults were considered at high risk (HR) if they had ever been told by a doctor or other health professional that they had asthma, diabetes, heart disease, other than high blood pressure, heart murmur, or mitral valve prolapse, a lung condition other than asthma, a kidney condition, obesity, sickle cell anemia or other anemia, a neurologic or neuromuscular condition that makes it difficult to cough, a liver condition or a weakened immune system caused by chronic illness or by medicines taken for chronic illness such as cancer, chemotherapy, HIV/AIDS, steroids, and transplant medicines.

¶ Race-ethnicity is either self-reported (NIFS) or reported by parent/guardian (NIS-Flu). Persons of Hispanic ethnicity may be of any race. Non-Hispanic, other or multiple race includes Asian, American Indian/Alaska Native, Native Hawaiian or other Pacific Islander, multiracial, and other races.

†† Other place includes military-related place, other school such as trade school, home, and other unspecified non-medical place.