Influenza (flu) is a contagious respiratory illness that can cause mild to severe illnesses, sometimes resulting in hospitalization or even death. Some people are more likely to develop severe illness from flu, especially people aged ≥65 years, children aged ≤5 years, people with certain high-risk 1 medical conditions, and pregnant women. Flu vaccination is the best way to prevent serious complications and death caused by flu. The Advisory Committee on Immunization Practices recommends annual flu vaccination for all persons aged ≥6 months who do not have contraindications to vaccination [1]. This report contains estimates of flu vaccination coverage as of mid-November 2018 based on the Centers for Disease Control and Prevention (CDC) sponsored surveys, the National Immunization Survey-Flu (NIS-Flu) for children aged 6 months–17 years and the National Internet Flu Survey (NIFS) for adults aged ≥18 years. Flu vaccination coverage among children aged 6 months–17 years was 45.6%, an increase of 6.8 percentage points compared with the same time period last flu season. Flu vaccination coverage among adults aged ≥18 years was 44.9%, an increase of 6.4 percentage points compared with the same time period last flu season. Coverage increased for children aged 6 months–12 years and among all adult age groups. Interpretation of these results should take into account limitations of the surveys, including reliance on self-report of vaccination status and decreasing response rates; however, results are consistent with other CDC internal data sources. People not yet vaccinated this season should get a flu vaccination as soon as possible. To improve flu vaccination coverage for the 2018–19 flu season, healthcare providers are encouraged to strongly recommend and offer flu vaccination to all of their patients. People not visiting a provider during the flu season have many convenient places they can go for a flu vaccination. As of November 30, 163.8 million doses of flu vaccine have been distributed, an increase from the 155 million doses distributed for all of last season. Final 2018–19 flu season vaccination coverage estimates will be available on the CDC FluVaxView webpage in September 2019.

1 Respondents were defined as being at high risk for complications from flu if they reported currently having any of the following conditions: asthma, diabetes, a lung condition other than asthma, heart disease (other than high blood pressure, heart murmur, or mitral valve prolapse), a kidney condition, sickle cell anemia or other anemia, a neurologic or neuromuscular condition, obesity, a liver condition, a weakened immune system caused by chronic illness or by medicines taken for a chronic illness such as cancer, chemotherapy, HIV/AIDS, steroids, and transplant medicines, or being currently pregnant.

The NIS-Flu is an ongoing, national list-assisted random-digit-dialed cellular telephone survey of households with children. It includes three components: the NIS-Child for children aged 19–35 months, the NIS-Teen for children aged 13–17 years, and the Child Influenza Module (CIM) for children aged 6–18 months and aged 3–12 years identified during the household screening process for the NIS-Child and NIS-Teen. Respondents aged ≥18 years were asked if their child had received a flu vaccination since July 1, 2018, and, if so, in which month and year. Interviewers conduct the survey in English or Spanish; interviews conducted in other languages used language-line interpretation servicespdf icon. Flu vaccination coverage estimates presented in this report are based on interviews conducted during October 1–November 17, 2018, to cover vaccinations received from July–mid-November, 2018. The sample includes a total of 24,083 children for which the parent reported vaccination status. For reporting place of vaccination, three weeks of NIS-Flu interviews (October 28–November 17, 2018) were combined; the place of vaccination estimates are based on parental responses for 4,555 vaccinated children to the survey question: “At what kind of place did [child] get his/her most recent flu vaccination?” Flu vaccination coverage estimates represent the cumulative proportion of children vaccinated before November 17, 2018. Estimates were calculated using an enhanced estimation method that resembles the Kaplan-Meier procedure [2]. The flu vaccination coverage estimates represent receipt of at least one dose of flu vaccine. Place of vaccination was estimated using simple weighted proportions. All estimates were weighted based on the probability of selection of the telephone number, including adjustments for nonresponse at the telephone number resolution and household screening stages, probability of selecting the child of interest within the household, and for person nonresponse. The data were also weighted using a ratio adjustment to population controls (age, sex, race/ethnicity, and geographic area). All NIS-Flu estimates reported here were calculated by NORC at the University of Chicago utilizing weights they developed.

The NIFS was conducted to rapidly collect flu vaccination-related data early in the 2018–19 flu season. The survey used a probability-based Internet panel (KnowledgePanel®) representative of the noninstitutionalized U.S. population aged ≥18 years. Participants were chosen by a random selection of residential addresses. The NIFS sampling design was a stratified design with twelve strata defined as the interaction of age group (18–49 years, 50–64 years, and ≥65 years) and race/ethnicity group (non-Hispanic white, non-Hispanic black, Hispanics, and non-Hispanic other or multiple races). Additional details about the NIFS have been published [3]. The survey was conducted November 1–November 15, 2018 and was written in English only. A total of 4,286 adult respondents answered the flu vaccination status question. All NIFS estimates reported here were calculated by RTI International utilizing weights developed by GfK Custom Research, LLC, which adjusted the base weights for survey nonresponse and for coverage of the target population. The data were also weighted using population control totals (age, sex, race/ethnicity, education, census region, household income, home ownership status, and metropolitan area). Flu vaccination coverage estimates represent the approximate proportion of adults vaccinated before November 15, 2018. Respondents reporting “don’t know” or who refused to answer the vaccination status question were excluded from vaccination coverage estimate calculations (0.8% of respondents).

Differences between groups and between 2017–18 and 2018–19 early-seasons were determined using t-tests with significance at p<0.05. Differences mentioned in this report were statistically significant.

For adults aged 18–64 years with and without high-risk conditions, flu vaccination coverage increased by 5.9 and 6.3 percentage points, respectively, compared with 2017–18 early-season estimates (Figure 4).

Early 2018–19 season estimates indicate increases in flu vaccination coverage among children and adults compared with 2017–18 early-season estimates. Because flu vaccination is the best way to prevent death and hospitalization due to the flu, people not yet vaccinated this season should get a flu vaccination as soon as possible. Unvaccinated persons are at higher risk of flu illness themselves and of transmitting flu to others, some of whom may be at high risk of severe illness from flu due to their age (children aged ≤5 years, and especially aged ≤2 years, and adults aged ≥65 years) or certain underlying high-risk medical conditions [1, 4].

Continued efforts are needed to increase the percentage of the population vaccinated during the next few months to reduce the burden of flu. As the 2018–19 flu season is underway, it is important that providers prioritize flu vaccination for their patients. This includes client reminders, assessing vaccination status at every visit, making a strong recommendation for vaccination, and offering the vaccine, and if the provider does not stock the vaccine onsite, referring to another provider or location for vaccination. Immunization programs should work with community leaders to promote vaccination, ensure all members have access to flu vaccination, and ensure that all members understand the importance of flu vaccination in preventing disease. For more information about flu, including flu vaccine recommendations, flu activity and surveillance, and resources for discussing flu vaccination with patients, visit the CDC flu webpage. 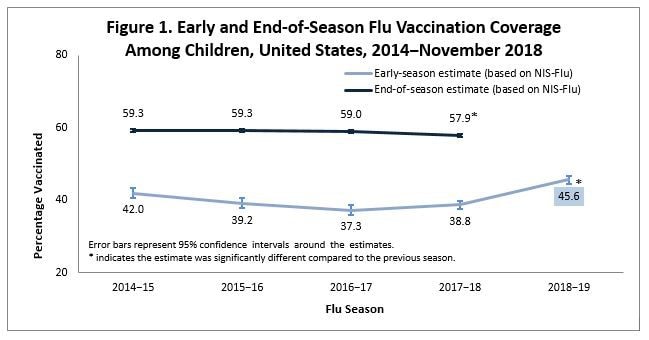 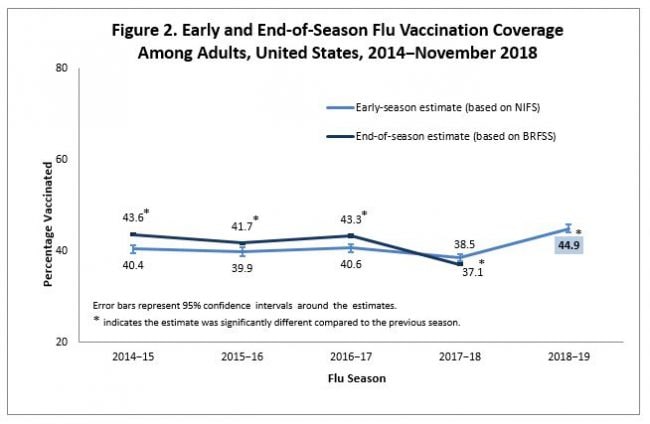 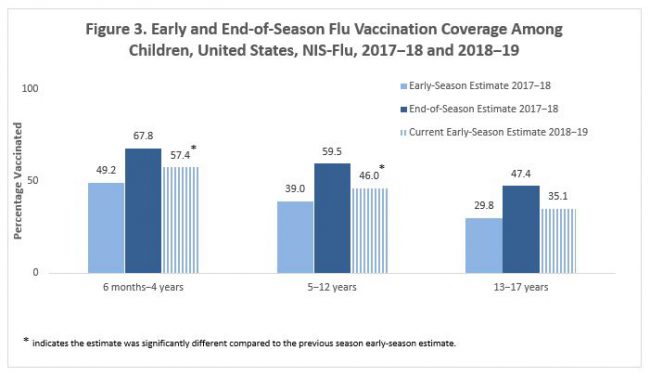 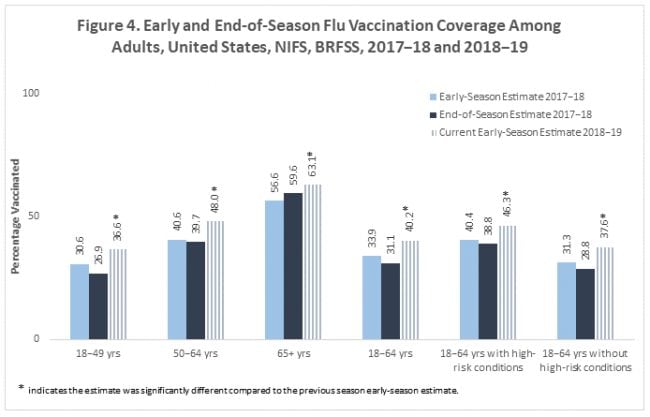 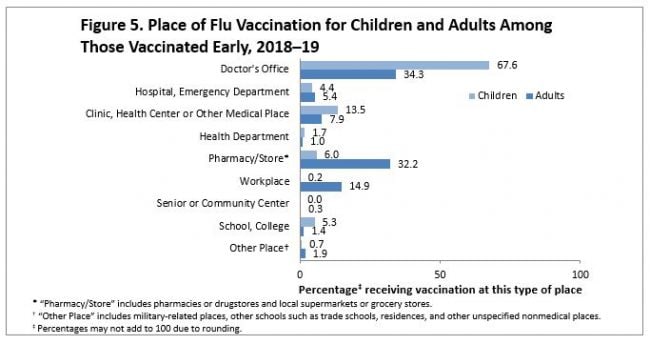 Additional flu vaccination coverage estimates for the 2018–19 early season are provided on FluVaxView as tables (see box below).

The estimates in this report are subject to the following limitations. First, the findings reported here are early-season estimates and final end-of-season coverage estimates may differ. Second, children aged 6 months–8 years may require two doses of flu vaccine to optimize immunity [1]; estimates in this report reflect parental report of at least one dose, not whether those children requiring two doses were fully immunized. Third, the NIS-Flu is a telephone survey that excludes households with no cellular service. Noncoverage and nonresponse bias may remain after weighting adjustments. Fourth, the adult estimates in this report are based on the NIFS, an Internet panel survey. Although the Internet panel was probability-based, the estimates may not represent all adults in the United States, and bias may remain after the weighting adjustments. Fifth, the differences observed in point estimates from different surveys might be due to differences in sampling design, mode of the surveys, or other survey attributes. The end-of-season estimates from Behavioral Risk Factor Surveillance, System data for the 2017–18 season showed a decrease in vaccination coverage among adults aged ≥18 years, aged 18–49 years, aged 50–64 years, and aged ≥65 years of about 6-7 percentage points. The NIFS only detected decreases of 3.7 percentage points among adults aged 18–49 years and 2.8 percentage point among adults aged 18–64 years last year. Finally, all estimates rely on self-report and are not validated with medical records; validity studies have shown that parental report (for children) and self-report (for adults) overestimates flu vaccination coverage [5-7].